Copyright 2015 Libero Themes.
All Rights Reserved.
Westlake Legal Group > Artificial Intelligence  > A Machine May Not Take Your Job, but One Could Become Your Boss
0 Comments
Share

A Machine May Not Take Your Job, but One Could Become Your Boss

When Conor Sprouls, a customer service representative in the call center of the insurance giant MetLife talks to a customer over the phone, he keeps one eye on the bottom-right corner of his screen. There, in a little blue box, A.I. tells him how he’s doing.

Talking too fast? The program flashes an icon of a speedometer, indicating that he should slow down.

Sound sleepy? The software displays an “energy cue,” with a picture of a coffee cup.

Not empathetic enough? A heart icon pops up.

For decades, people have fearfully imagined armies of hyper-efficient robots invading offices and factories, gobbling up jobs once done by humans. But in all of the worry about the potential of artificial intelligence to replace rank-and-file workers, we may have overlooked the possibility it will replace the bosses, too. 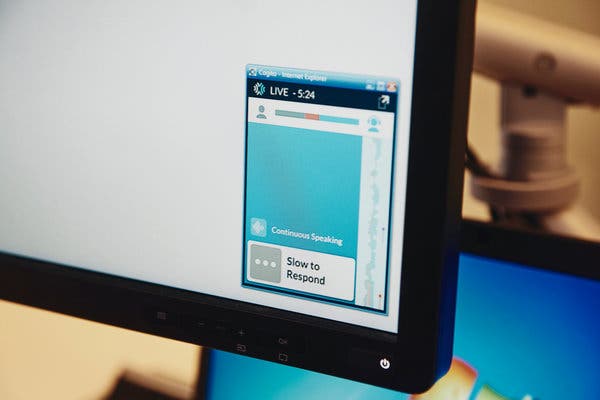 The application Cogito on view on a monitor.CreditTony Luong for The New York Times

Mr. Sprouls and the other call center workers at his office in Warwick, R.I., still have plenty of human supervisors. But the software on their screens — made by Cogito, an A.I. company in Boston — has become a kind of adjunct manager, always watching them. At the end of every call, Mr. Sprouls’s Cogito notifications are tallied and added to a statistics dashboard that his supervisor can view. If he hides the Cogito window by minimizing it, the program notifies his supervisor.

Cogito is one of several A.I. programs used in call centers and other workplaces. The goal, according to Joshua Feast, Cogito’s chief executive, is to make workers more effective by giving them real-time feedback.

“There is variability in human performance,” Mr. Feast said. “We can infer from the way people are speaking with each other whether things are going well or not.”

The goal of automation has always been efficiency, but in this new kind of workplace, A.I. sees humanity itself as the thing to be optimized. Amazon uses complex algorithms to track worker productivity in its fulfillment centers, and can automatically generate the paperwork to fire workers who don’t meet their targets, as The Verge uncovered this year. (Amazon has disputed that it fires workers without human input, saying that managers can intervene in the process.) IBM has used Watson, its A.I. platform, during employee reviews to predict future performance and claims it has a 96 percent accuracy rate.

Then there are the start-ups. Cogito, which works with large insurance companies like MetLife and Humana as well as financial and retail firms, says it has 20,000 users. Percolata, a Silicon Valley company that counts Uniqlo and 7-Eleven among its clients, uses in-store sensors to calculate a “true productivity” score for each worker, and rank workers from most to least productive.

Management by algorithm is not a new concept. In the early 20th century, Frederick Winslow Taylor revolutionized the manufacturing world with his “scientific management” theory, which tried to wring inefficiency out of factories by timing and measuring each aspect of a job. More recently, Uber, Lyft and other on-demand platforms have made billions of dollars by outsourcing conventional tasks of human resources — scheduling, payroll, performance reviews — to computers.

But using A.I. to manage workers in conventional, 9-to-5 jobs has been more controversial. Critics have accused companies of using algorithms for managerial tasks, saying that automated systems can dehumanize and unfairly punish employees. And while it’s clear why executives would want A.I. that can track everything their workers do, it’s less clear why workers would.

MetLife uses the A.I. software with 1,500 of its call center employees.CreditTony Luong for The New York Times

“It is surreal to think that any company could fire their own workers without any human involvement,” Marc Perrone, the president of United Food and Commercial Workers International Union, which represents food and retail workers, said in a statement about Amazon in April.

In the gig economy, management by algorithm has also been a source of tension between workers and the platforms that connect them with customers. This year, drivers for Postmates, DoorDash and other on-demand delivery companies protested a method of calculating their pay, using an algorithm, that put customer tips toward guaranteed minimum wages — a practice that was nearly invisible to drivers, because of the way the platform obscures the details of worker pay.

There were no protests at MetLife’s call center. Instead, the employees I spoke with seemed to view their Cogito software as a mild annoyance at worst. Several said they liked getting pop-up notifications during their calls, although some said they had struggled to figure out how to get the “empathy” notification to stop appearing. (Cogito says the A.I. analyzes subtle differences in tone between the worker and the caller and encourages the worker to try to mirror the customer’s mood.)

MetLife, which uses the software with 1,500 of its call center employees, says using the app has increased its customer satisfaction by 13 percent.

“It actually changes people’s behavior without them knowing about it,” said Christopher Smith, MetLife’s head of global operations. “It becomes a more human interaction.”

Still, there is a creepy sci-fi vibe to a situation in which A.I. surveils human workers and tells them how to relate to other humans. And it is reminiscent of the “workplace gamification” trend that swept through corporate America a decade ago, when companies used psychological tricks borrowed from video games, like badges and leader boards, to try to spur workers to perform better.

Phil Libin, the chief executive of All Turtles, an A.I. start-up studio in San Francisco, recoiled in horror when I told him about my call center visit.

“That is a dystopian hellscape,” Mr. Libin said. “Why would anyone want to build this world where you’re being judged by an opaque, black-box computer?”

Defenders of workplace A.I. might argue that these systems are not meant to be overbearing. Instead, they’re meant to make workers better by reminding them to thank the customer, to empathize with the frustrated claimant on Line 1 or to avoid slacking off on the job.

Icons that are used in Cogito are placed around the MetLife call center.CreditTony Luong for The New York Times

The best argument for workplace A.I. may be situations in which human bias skews decision-making, such as hiring. Pymetrics, a New York start-up, has made inroads in the corporate hiring world by replacing the traditional résumé screening process with an A.I. program that uses a series of games to test for relevant skills. The algorithms are then analyzed to make sure they are not creating biased hiring outcomes, or favoring one group over another.

“We can tweak data and algorithms until we can remove the bias. We can’t do that with a human being,” said Frida Polli, Pymetrics’ chief executive.

Using A.I. to correct for human biases is a good thing. But as more A.I. enters the workplace, executives will have to resist the temptation to use it to tighten their grip on their workers and subject them to constant surveillance and analysis. If that happens, it won’t be the robots staging an uprising.