Authorities in California searching for a missing teenage girl who was last seen with two murder suspects located an abandoned vehicle connected to the trio on Friday near the border with Mexico.

The vehicle was the same car that Alora Benitez, 15, was last seen in on Wednesday morning with her 40-year-old mother, Maricela Mercado and a 39-year-old man identified as Roman Cerratos.

WOMAN CAUGHT ON CAMERA DUMPING PUPPIES NEXT TO DUMPSTER BEHIND STORE IN COACHELLA, CALIFORNIA

Both adults are considered “armed and dangerous” and are suspects in a murder investigation. The victim, Jeffrey Appel, 32, was found dead Tuesday in the front seat of a white Audi in the city of Carson, California. 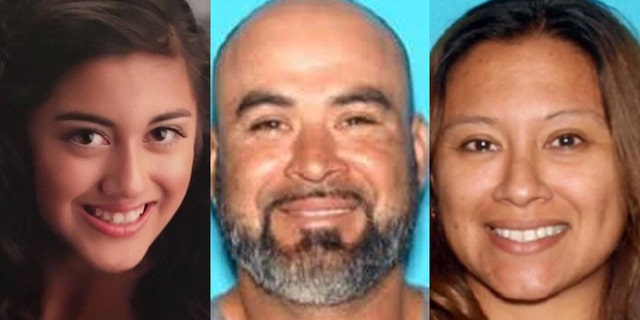 Authorities are searching for Alora Benitez, who has been missing since Wednesday. She was last seen with Roman Cerratos, and her mother, Maricela Mercado, who are murder suspects and also missing. (Los Angeles County Sheriff’s Department)

“Her family is concerned for her safety,” police said.

Authorities have not revealed how Appel was killed, or what may have motivated the slaying. The trio had last been seen driving in the BMW sedan that had a Nevada license plate that read “MARIMAR.”

Alora is described by police as 5-feet 2-inches, 100 pounds, Hispanic with brown hair and brown eyes.

The missing teenager spurred authorities to issue an Amber Alert in Southern California, which at one pointed extended to Nevada, according to FOX11.

Anyone with information on the murder or missing girl is urged to contact the Los Angeles County Sheriff’s Department’s Homicide Bureau at (323) 890-5500.