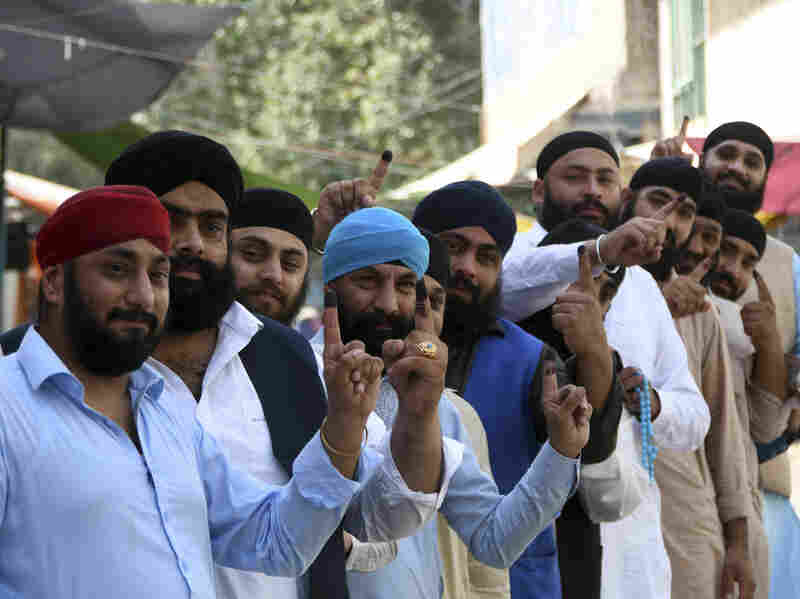 Afghan Sikhs show their inked fingers after casting their votes at a polling station in the city of Jalalabad, east of Kabul, Afghanistan, on Saturday. Mohammad Anwar Danishyar/AP hide caption

Afghan Sikhs show their inked fingers after casting their votes at a polling station in the city of Jalalabad, east of Kabul, Afghanistan, on Saturday.

About 9.6 million Afghans are registered to vote, but only a fraction were expected to cast a ballot — fewer than the 2014 presidential election or the 2018 parliamentary elections, reporter Jennifer Glasse told NPR’s Weekend Edition. A report from the Afghanistan Analysts Network puts rough estimates of turnout from the Independent Election Commission, or IEC, at under 2 million voters. This means a small percentage of the country will determine the democracy’s fate.

The two front-runners, incumbent President Ashraf Ghani and his chief executive, Abdullah Abdullah, have shared power since the 2014 presidential elections in a compromise negotiated by former U.S. Secretary of State John Kerry. In that race, Abdullah had accused Ghani of rigging the election, citing an alleged million fraudulent votes, and again warned of a possible illegitimate Ghani victory in Saturday’s election.

“The American officials are adamant that they will not ride to the rescue again,” said Kate Clark, the co-director of Afghanistan Analysts Network, a Kabul-based policy research organization, adding that the sentiment stems from a stronger opinion in Washington that Afghans “have to sort things out themselves.”

Preliminary results are expected on Oct. 17 and final results on Nov. 7. With 18 candidates on the ballot, there is a chance that no one candidate will receive a majority of votes, which will force a second ballot between the top two candidates.

Another prominent candidate and former warlord, Gulbuddin Hekmatyar, warned that “if the vote wasn’t fair and transparent, he would call on his thousands of supporters across the country to perhaps go back to the battlefield,” according to Glasse. Hekmatyar is running on behalf of his Hezb-e-Islami party, a former militia that signed a peace deal with the Ghani administration in 2016.

In an interview with The Associated Press, former President Hamid Karzai, who still wields significant political power in Afghanistan, said that Saturday’s election “has all the potential and possibilities to lead the country further down to the abyss of crisis and insecurity and divisions.” Karzai said he believes elections should be held after peace is negotiated between the U.S., the Afghan government and the Taliban. Glasse said that many Afghans thought peace talks would preclude the presidential elections.

“The one thing everyone agrees with, wherever you go in Afghanistan, is they want the fighting to stop. They would like to see peace,” Glasse said.

The election, which had already been pushed back twice, comes after peace talks between the U.S. and the Taliban collapsed earlier this month, prompting a spate of attacks throughout the country by the Islamic insurgent group.

“The concessions made looked like a withdrawal agreement in the end,” Clark said, referring to the failed peace deal. “The Taliban didn’t give what they needed to give, and if it had been signed, many within the Taliban were thinking it gave them carte blanche to march into Kabul.

“They didn’t see it as a peace agreement, they saw it as a means of getting rid of their main and most deadly opponent.”

On Sept. 17, the Taliban claimed responsibility for two suicide bombings that killed 48 people. One of the bombings targeted a Ghani campaign rally where Ghani himself was present.

The Taliban had warned Afghan civilians not to vote, go to polling centers, or participate in any election-related efforts. The AP reported that tens of thousands of Afghan security officers were deployed throughout the country to ensure that the polling centers are protected from Taliban attacks, although a bomb attack on a mosque designated as a polling station in the southern city of Kandahar wounded 15 earlier Saturday. Reuters reported that at least five bombs went off in Jalalabad, in eastern Afghanistan, killing one. The northern city of Kunduz, located in an area contested by both the Taliban and the Afghan government, was also fired upon by mortars and attacked by armed insurgents with confirmed civilian casualties, according to the AP. 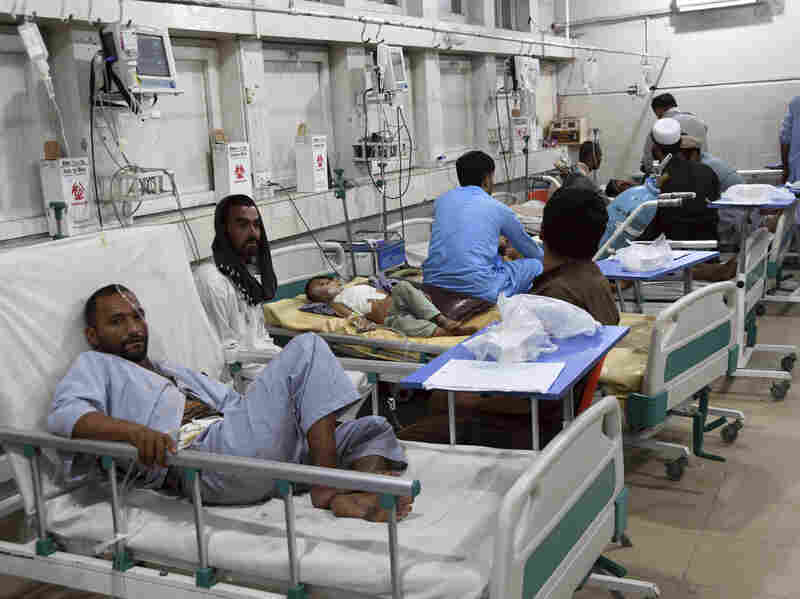 Wounded Afghans lie on a bed at a hospital after a bomb attack in the city of Jalalabad, east of Kabul, on Saturday. Mohammad Anwar Danishyar/AP hide caption

Wounded Afghans lie on a bed at a hospital after a bomb attack in the city of Jalalabad, east of Kabul, on Saturday.

Operation Resolute Support, the NATO mission in Afghanistan, has discontinued its collection of data on the number of districts and people under Taliban or Afghan government control, saying it “no longer saw decision-making value in these data,” according to an April 30 report. The most recent report on territory control from the Special Inspector General for Afghanistan Reconstruction had the Afghan government controlling or influencing 56% of its territory as of October 2018. The Taliban held 17%, and 27% was contested.

The IEC gave several figures throughout the day as to the actual number of polling centers closed, according to a report by Afghanistan Analysts Network. The IEC had planned to open 5,373, and on Friday security officials said 445 would be closed on election day because of security concerns. Since then, the IEC has offered figures of 481 and 464 closed, with the most recent figures, given by the Ministry of Information, at 4,905 centers open and 468 closed.

“If you’ve got centers that are reported open but are not, it raises suspicions — they could provide opportunities for ballot stuffing,” Clark said.

Even with protected polling centers and motivated voters, Al-Jazeera reported that “voters complained that lists were incomplete or missing and biometric identification machines intended to reduce fraud were not working properly or people were not adequately trained on how to use them.”

Between threats from the Taliban, mismanaged or closed polling centers, and the possibility of chaos if the results are disputed by candidates, Afghans face a tough decision — leave the election in the hands of others and stay home, or head out to polling centers and express their opinion at the possible cost of their lives.

Alexander Tuerk is an intern at Here & Now.