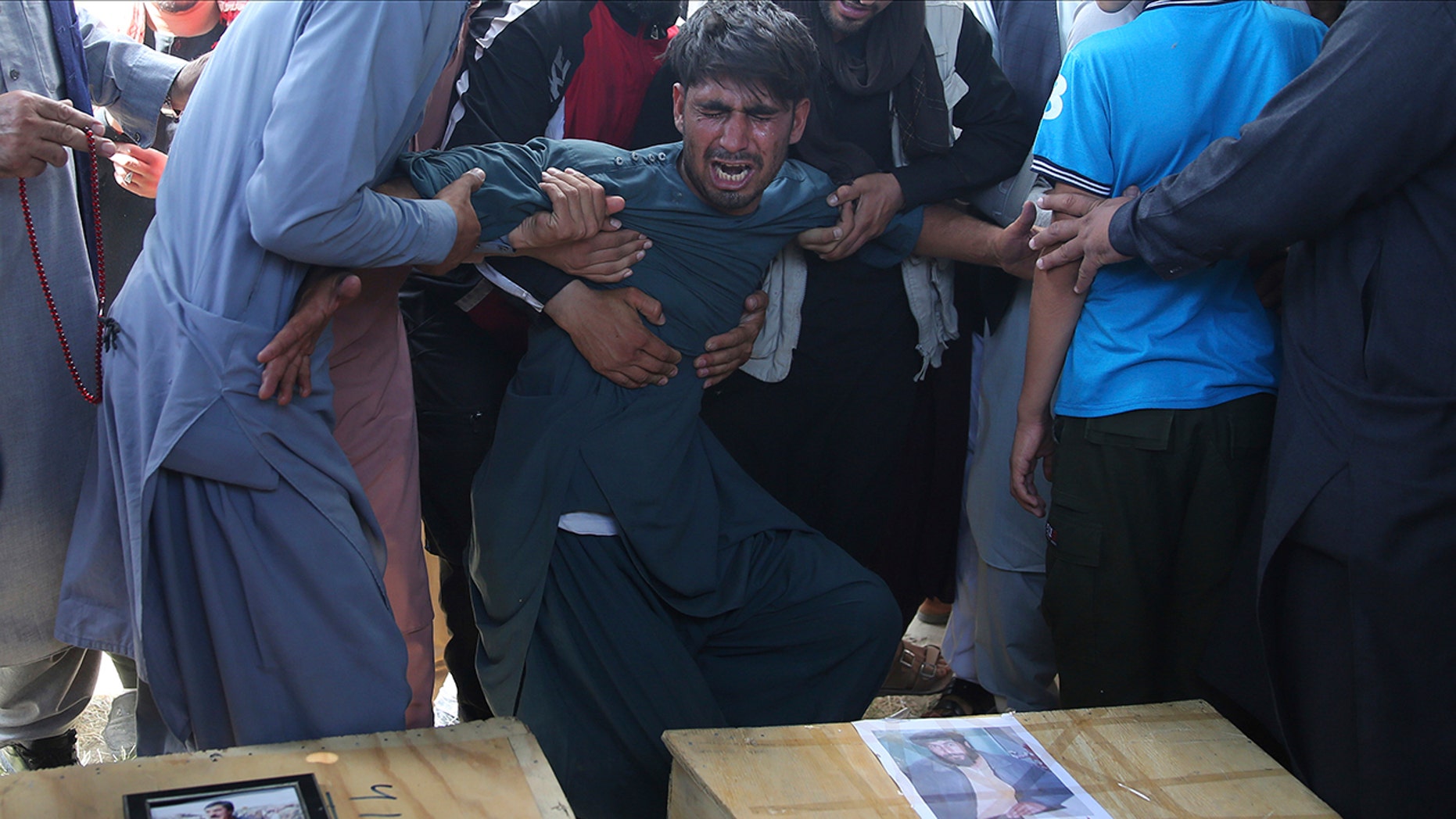 A relative wails near the coffins of victims of the Dubai City wedding hall bombing during a mass funeral in Kabul, Afghanistan.  (AP Photo/Rafiq Maqbool)

KABUL, Afghanistan (AP) — Afghanistan’s president on Monday vowed to “eliminate” all safe havens of the Islamic State group as the country marked a subdued 100th Independence Day after a horrific wedding attack claimed by the local IS affiliate.

President Ashraf Ghani’s comments came as Afghanistan mourns at least 63 people, including children, killed in the Kabul bombing at a wedding hall late Saturday night. Close to 200 others were wounded.

Many outraged Afghans ask whether an approaching deal between the United States and the Taliban to end nearly 18 years of fighting — America’s longest war — will bring peace to long-suffering civilians. The bomber detonated his explosives in the middle of a dancing crowd, and the IS affiliate later said he had targeted a gathering of minority Shiites, whom it views as apostates deserving of death.

Both the bride and groom survived, and in an emotional interview with local broadcaster TOLOnews the distraught groom, Mirwais Alani, said their lives were devastated within seconds.

More than anything in their nearly year-long negotiations with the U.S., the Taliban want some 20,000 U.S. and allied forces to withdraw from the country. The U.S. for its part wants Taliban assurances that Afghanistan — which hosted al-Qaida leader Osama bin Laden before 9/11 — will not be a launching pad for global terror attacks.

The U.S. envoy in talks with the Taliban, Zalmay Khalilzad, on Sunday said the peace process should be accelerated to help Afghanistan defeat the IS affiliate. That would include intra-Afghan talks on the country’s future.

But Ghani on Monday asserted that the Taliban, whom the U.S. now hopes will help to curb the IS affiliate’s rise, are just as much to blame for the wedding attack. His government is openly frustrated at being sidelined from the U.S. talks with the insurgent group, which regards the Afghan government as a U.S. puppet.

The Taliban “have created the platform for terrorists” with their own brutal assaults on schools, mosques and other public places over the years, the president said.

More than 32,000 civilians in Afghanistan have been killed in the past decade, the United Nations said earlier this year. More children were killed last year — 927 — than in any other over the past decade by all actors, the U.N. said, including in operations against insurgent hideouts carried out by international forces.

He asserted that safe havens for militants are across the border in Pakistan, whose intelligence service has long been accused of supporting the Taliban. The IS affiliate’s claim of the wedding attack said it was carried out by a Pakistani fighter seeking martyrdom.

Ghani called on people in Pakistan “who very much want peace” to help identify militant safe havens there.

Last month after meeting with President Donald Trump, Pakistan’s Prime Minister Imran Khan insisted he will do his best to persuade the Taliban to open negotiations with the Afghan government to resolve the war.

Trump on Sunday told reporters he doesn’t want Afghanistan to be a “laboratory for terror.” He was briefed on Friday on the progress of the U.S.-Taliban talks, of which few details have emerged.

In a message marking Afghanistan’s independence and “century of resilience,” U.S. Secretary of State Mike Pompeo called the weekend wedding bombing “an attack against humanity.” It was one of many international expressions of condemnation pouring in following the attack.