After Trump Body Shames Him, Supporter Says ‘I Love the Guy’ 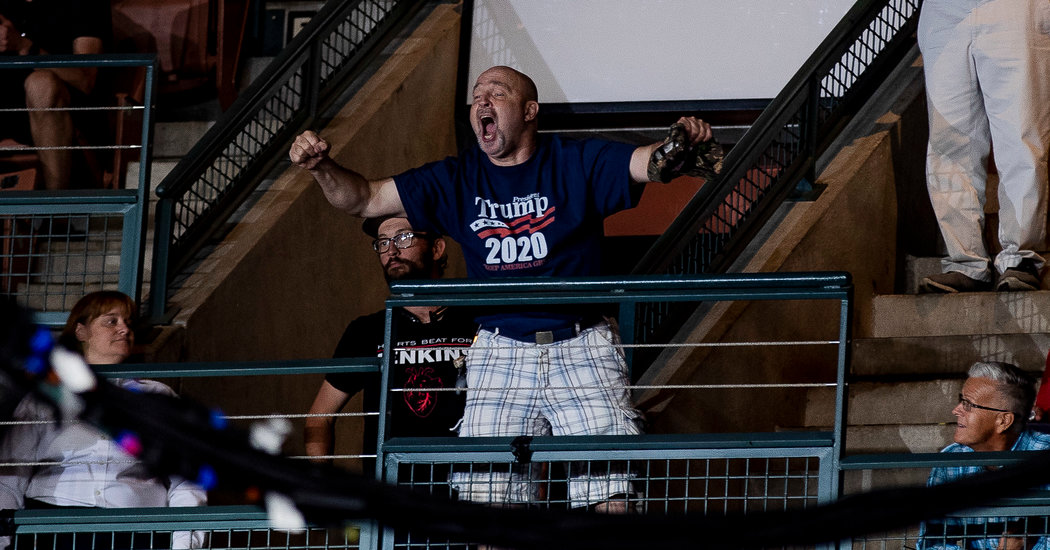 Sometimes the self-declared greatest counterpuncher in the world lands a blow on the wrong person.

That was the case on Thursday night in Manchester, N.H., during a campaign rally when President Trump publicly ridiculed a man because of his weight; the president thought he was a protester. Instead, the man turned out to be a supporter of the president’s who was trying to help remove the actual protesters.

The episode took place midway through the rally, as Mr. Trump’s 90-minute speech was interrupted and the president paused to wait for the disruption to end. He looked up to the seats where it was taking place, and to a man wearing a Trump 2020 campaign shirt, and said, “That guy’s got a serious weight problem! Go home. Start exercising.” Mr. Trump then turned back to his speech and said his campaign was about “love.”

The president has come to be known for elementary insults about people’s appearances. But it is rare for him to go after supporters, whom Mr. Trump regularly flatters and praises in public.

The man with the “serious weight problem,” Frank Dawson, was standing in the arena near some protesters who were being ushered out. Mr. Dawson, donning his Trump gear, was fist-pumping the air as they were guided away.

Mr. Trump’s aides quickly realized the problem and tracked down Mr. Dawson’s contact information so the president could call him. From Air Force One, Mr. Trump left a voice mail message for Mr. Dawson, but did not apologize for his insult, an aide said, and instead said he did not mean to refer to him. The president then thanked Mr. Dawson for his support.

But Mr. Dawson said he was not upset by the insult.

“I think he thought I was part of it, but I wasn’t,” Mr. Dawson said on Fox News, later adding: “Everything’s good. I love the guy. He’s the best thing that ever happened to this country.”

Before he knew he criticized a supporter, Mr. Trump, in a moment of self-deprecation, acknowledged his own struggles with weight and then said the man at the rally had “a bigger problem than I do.”

Mr. Trump has used weight as a way to demean women and business associates. After Hillary Clinton mentioned in a 2016 presidential debate that Mr. Trump once referred to a Miss Universe participant as “Miss Piggy,” he called that contestant, Alicia Machado, the “worst” he had ever had because of what he called a “massive” weight gain. Also, he once kept in an office drawer a “fat photo” of an employee, and told a colleague, “You like your candy,” according to The Washington Post.

The president also has a long history of lobbing insults at protesters and belittling his real and perceived opponents for their appearances.

While he was campaigning in 2015, Mr. Trump mocked the appearance of a New York Times reporter with a physical disability. “Now the poor guy, you ought to see this guy,” Mr. Trump said, before jerking his arms around and holding his right hand at an angle. He later denied that he was mocking the reporter’s appearance.

And at a rally that year in Massachusetts, Mr. Trump said: “You know, it’s amazing. I mentioned food stamps, and that guy who was seriously overweight went crazy,” referring to a protester who had been removed for calling Mr. Trump a “cancer that is killing democracy.”

In 2016, Mr. Trump retweeted an unflattering image of the wife of Senator Ted Cruz of Texas, then his opponent in the Republican presidential primary race. A picture of Mr. Cruz’s wife, Heidi, was featured next to a flattering picture of Mr. Trump’s wife, Melania, a former model. The caption on the picture said, “Images are worth a thousand words.”

That same year, Mr. Trump mocked the appearance of Carly Fiorina, also a rival for the Republican nomination, suggesting that she was not attractive enough to be the next president of the United States.

“Can you imagine that, the face of our next president?” Mr. Trump said during an interview with Rolling Stone magazine. “I mean, she’s a woman, and I’m not supposed to say bad things, but really, folks, come on. Are we serious?”

He later said that he was not referring to Ms. Fiorina’s face, but rather her “persona.”