Police in Alabama said they arrested a man early Sunday morning after he bit off a woman’s finger during a fight.

Lt. Michael Johnson with the Huntsville Police Department told Fox News police got a call about a “physical altercation” between Shay Michael Thome, 48, and his wife, who was threatening to leave.

Johnson said the couple reported there’d been some “tension” in their relationship and Thome’s wife was in the process of gathering her stuff to leave when the incident happened. Police said the couple was arguing for a couple of days prior to the fight but she did not report any domestic violence to police in the days prior to that night.

Johnson told Fox News that Thome came home while his wife’s friend was helping her gather her belongings. He said Thome grabbed her friend’s hand and bit off her pinky finger.

Police said Thome then started “assaulting” the friend “with his fists.” Johnson said Thome’s wife came running into the room and was trying to get him off her friend when he bit his wife’s hand as well. Johnson said Thome “did not cause a serious injury” to his wife. 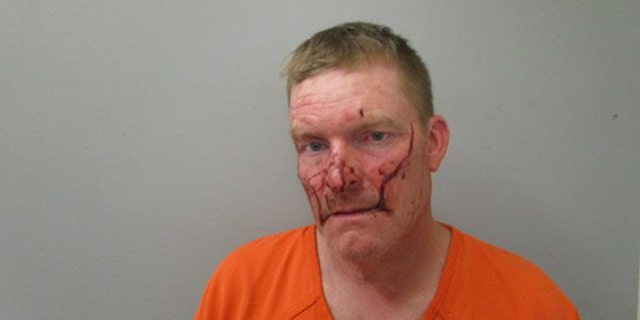 Thome’s wife and her friend eventually got away, Johnson said, adding that Thome then grabbed a gun and busted out a glass door using his “gun as a tool to show his anger” as his wife was trying to leave. Johnson said his wife was cut by the shattered glass.

Johnson said her friend then called 911.

The friend was transported to the hospital. Johnson said Thome spit out the friend’s pinky after he bit it off and an officer later found it in the living room. He said officers brought her pinky to the hospital but “doctors were unable to reattach it” when the friend underwent surgery.

“This is probably one of the most unique assaults we have ever seen,” Johnson told Fox News, calling the incident “wild.”

Thome remained in custody in the Madison County Jail, according to Johnson.