A far-left group backed by Rep. Alexandria Ocasio-Cortez is supporting a political newcomer to unseat a 30-year Democratic New York congressman who called out Rep. Ilhan Omar over anti-Semitism.

The candidacy of Jamaal Bowman, a 43-year-old public middle school teacher, was put forward by Justice Democrats in a continued effort to elect more progressive Democrats to Congress, the New York Times reported. 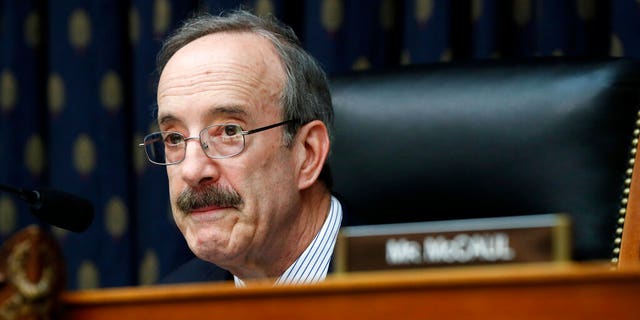 Yet Engel isn’t the moderate Democrat that his critics claim to be. He co-sponsored a Medicare-for-all plan and even joined Ocasio-Cortez and other progressive colleagues in introducing the Green New Deal, a radical overhaul of the economy in a bid to combat climate change. He has also voted with Ocasio-Cortez 96 percent of the time so far.

The source of frustration for the progressive is likely due to Engel’s rather hawkish views on foreign policy, including voting for the Iraq War in 2002, though he criticized the war in later years.

Engel, who is Jewish, has also angered far-left block of the party after he openly criticized Omar after the Minnesota Democrat said that “the political influence in this country that says it is OK to push for allegiance to a foreign country,” referring to Israel, which many perceived as anti-Semitic comments.

SENATE EXPRESSLY CONDEMNS ANTI-SEMITISM, AFTER DEMOCRAT-LED HOUSE ‘CAN’T BRING ITSELF’ TO DO THE SAME

In a fiery statement back in March, Engel said that though he welcomes debate about policy, “it’s unacceptable and deeply offensive to call into question the loyalty of fellow American citizens because of their political views, including support for the U.S.-Israel relationship.”

“We all take the same oath. Worse, Representative Omar’s comments leveled that charge by invoking a vile anti-Semitic slur,” he added.

“We all take the same oath. Worse, Representative Omar’s comments leveled that charge by invoking a vile anti-Semitic slur.”

Yet Engel challenger’s campaign appears to be taking off, already racking up prominent support from progressives.

“I’m supporting Jamaal Bowman for Congress in New York’s 16th Congressional District. He’s a lifelong educator and school principal in the Bronx. His experience, his values, and his policy ideas are what we need,” activist Shaun King tweeted.

Bowman released his first video Monday, where he speaks about his background and the news to build “new America.”

Ocasio-Cortez has been on the board of Justice Democrats before she was de-listed back in March following legal and ethical questions about her affiliation with the group. Her Financial Disclosure form submitted last month still lists her as a director of the organization.