Before Hurricane Dorian’s Arrival Comes a Question: Stay or Evacuate?

MIAMI — The Stovalls are staying put for Hurricane Dorian.

On Friday afternoon, they installed hurricane shutters and sterilized three 10-gallon jugs that they will fill with water before they settle in to ride out what could become a ferocious Category 4 storm.

But, just in case, they have also restocked their evacuation kit this week with sheets, towels, coffee, bug spray, batteries and wine. It stands by the door of their Coconut Grove home in the event they decide that maybe riding out the storm at home isn’t such a great idea.

With Dorian expected to make landfall on Tuesday, Florida residents are engaged in a complex, high-stakes set of financial, logistical and psychological calculations of whether to stay or go.

And while residents follow the weather and gauge their own tolerance for risk, local and state officials are having to balance a mix of technical, meteorological and political considerations in deciding whether to order evacuations that carry risks no matter what the decision.

“Here’s the dilemma with evacuation: He who orders it, owns it,” said Russel L. Honore, a retired Army lieutenant general who earned acclaim for leading the military response to Hurricane Katrina.

For many households, the cost of evacuation and finding a place to stay is a major factor. Others must weigh the mobility of aging family members, pets and children, and the type of structure they call home. In 2019, given the flood of news, storm-track projections, information and misinformation on the internet, there is also the challenge of making sense of Too Much Information, from breathless social media updates to relatives with an opinion.

Ms. Stovall, for one, disapproves of her sister’s plan to evacuate from the Boca Raton area to the Florida Keys, a strategy many are contemplating with a forecast that, for the moment, predicts a more northern landfall.

“If it slips south, you’re stranded there!” Ms. Stovall, a theater director, told her.

And in South Florida, many Jewish families were trying to determine if they were allowed to work on boarding up their house or prepare to leave it over the Sabbath, which began at 7:25 Friday night. In Hollywood, Fla., Rabbi Gideon Goldenholz of Temple Sinai of Hollywood said they could.

“A hurricane is life-threatening,” he said, “so you have to do everything you can.”

Gov. Ron DeSantis of Florida said shoulders on Interstate 95 had been cleared for traffic and would be open when local evacuation orders were issued. The state, he said, would largely advise rather than direct local officials on whether to tell residents to flee.

“You will see evacuations. I’m confident of that,” he said, adding, “But we’re not going to be telling every county, ‘Tell everybody to leave,’ because that may create some problems as well.”

That dilemma has a long history. In Texas, nearly 100 people died in vehicles while trying to evacuate from Hurricane Rita in 2005. But tens of thousands of people who did not evacuate during Hurricane Harvey required rescue. Officials were criticized for their decision to evacuate or not to evacuate in both storms.

For Floridians watching as Dorian gathers strength off shore, it does not help that this particular storm has such a large “cone of uncertainty,” as the meteorologists say. 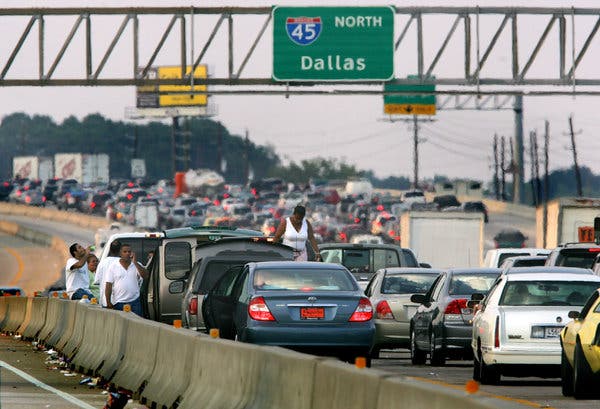 Thousands of cars trying to evacuate Houston in 2005, before Hurricane Rita struck.CreditCarlos Barria/Reuters

“The forecasts are so iffy,” lamented Terry Gellin, 69, a retired high school English and social studies teacher. “They say the storm has slowed down. What does that mean? There are just a lot of unknowns.”

In Miami, Ms. Gellin and her husband, Samuel Schrager, 70, a corporate lawyer, live in a condo apartment a few yards from the water on Key Biscayne, an island minutes from downtown.

“There’s a lot of anxiety,” Mr. Schrager said. “You feel it throughout the city. People in my gym. In my condo. My friends. It’s everywhere.”

The couple are evacuating. They think. But they are only going as far as a sturdy motel inland, on the edge of Miami International Airport. “I’m the president of my condo,” Mr. Schrager said. “I want to stay close.”

The recent memory of Hurricane Irma, which in 2017 chased residents trying to evacuate to safety across the state as it shifted directions, has tipped some in the direction of waiting it out.

Valerie Preziosi, a retired nurse on Big Pine Key was among those stuck in traffic for many hours two years ago as she and her husband obeyed the mandatory evacuation order. Barred from returning home for nearly a week, they found their home filled with mold that they might have prevented had they stayed, she said.

“Unless we hear it’s a direct hit of Category 4 or 5 we’re staying put, no matter what they say,” Ms. Preziosi said on Friday. “And I’m not alone. There’s a ton of people that feel the same way.”

Hurricanes can be particularly deadly for people who live on boats and ignore evacuation orders.

“I don’t know anybody who tried to ride out a hurricane and is still alive,” said Larry Krug, who grew up in Queens and the Bronx and worked as a yacht captain in Miami for more than 30 years. “There were two guys who decided to do that in Hurricane Andrew. The rescue people found the boats. A few days later they found the bodies.”

Shortly after daybreak Friday, live-aboard sloops and big power boats began pulling away from the docks on the edge of Biscayne Bay in Coconut Grove. Mr. Krug said he often took boats to shelter in the Miami River. He never hesitated when evacuation orders were issued.

Along the coast from Florida to South Carolina, people were warily considering their options — if they have them. The Atlanta Motor Speedway, which is one 850 acres 45 minutes south of Atlanta has opened its gates for those fleeing the storm.

But many people figure they don’t have a choice.

On a farm just south of Charleston, S.C., on the mostly rural Johns Island, Thomas Legare, 55, said that with over 150 cattle, and a couple of hundred pigs and chickens to care for, evacuation would not be an option for him and his two sisters. “Our biggest worry living on an island is evacuating and not being able to get back to make sure the animals are O.K.,” he said.

In downtown Charleston on Friday afternoon, the city’s Emergency Management director, Shannon Scaff, cringed at the notion of people refusing to follow an evacuation order. During Hurricane Floyd in 1999, he worked as a Coast Guard rescue swimmer along the coast of North Carolina — airlifting residents who chose not to evacuate.

“Every single person I put in a rescue basket hanging out of a helicopter had the same shocked look on their faces,” he said. “They couldn’t believe they’d gotten into that position.”

But in Miami, Jaime Gonzalez, 65, a custodian at a high school, said he would have evacuated to North Carolina where his daughters live. However, the trip would have been too much for his 99-year-old mother, who lives with him and his wife. Instead, he shuttered his house and tested his 400-watt gasoline generator. He is prepared, he said, for when the electricity goes out.