U.S. Border Patrol on Monday said agents apprehended a large group of nearly 200 illegal immigrants near a base at a New Mexico port of entry over the weekend.

The agency said 194 illegal immigrants were apprehended after 3 a.m. Sunday. They were trying to cross the border near Camp Bounds Forward Operating Base, located near the Antelope Wells Port of Entry in New Mexico, a statement read. The group consisted mostly of families and unaccompanied minors from Guatemala, Honduras and El Salvador. 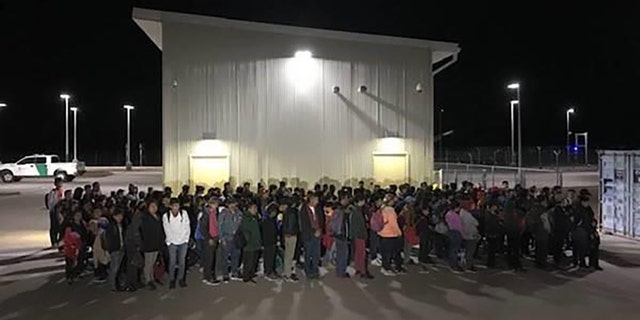 Migrants, mostly from Central America, were apprehended Sunday trying to cross the border illegally near the Antelope Wells Port of Entry in New Mexico. (U.S. Customs and Border Patrol)

A 7-year-old travelling with a parent was airlifted to a hospital after tests showed he had a high fever. The child was diagnosed with the flu and later returned to Border Patrol custody. Initial medical screenings showed other migrants had lice and scabies.

“Large groups like these exacerbate the current immigration process further impacting our workforce, facilities, and resources,” Interim Chief Patrol Agent Gloria Chavez said in a press release. “I commend the incredible work of our Border Patrol Agents who continue to push forward through this border crisis.”

Though the number of apprehensions has been down in recent months, border patrol operations are challenged by a high numbers of illegal immigrants entering the United States when compared to last year’s figures. 172,000 migrants had been apprehended in the El Paso Sector this fiscal year, a large increase from more than 31,000 migrants apprehended during the entire fiscal year 2018.