Detroit hurries to board vacant houses after serial slayings 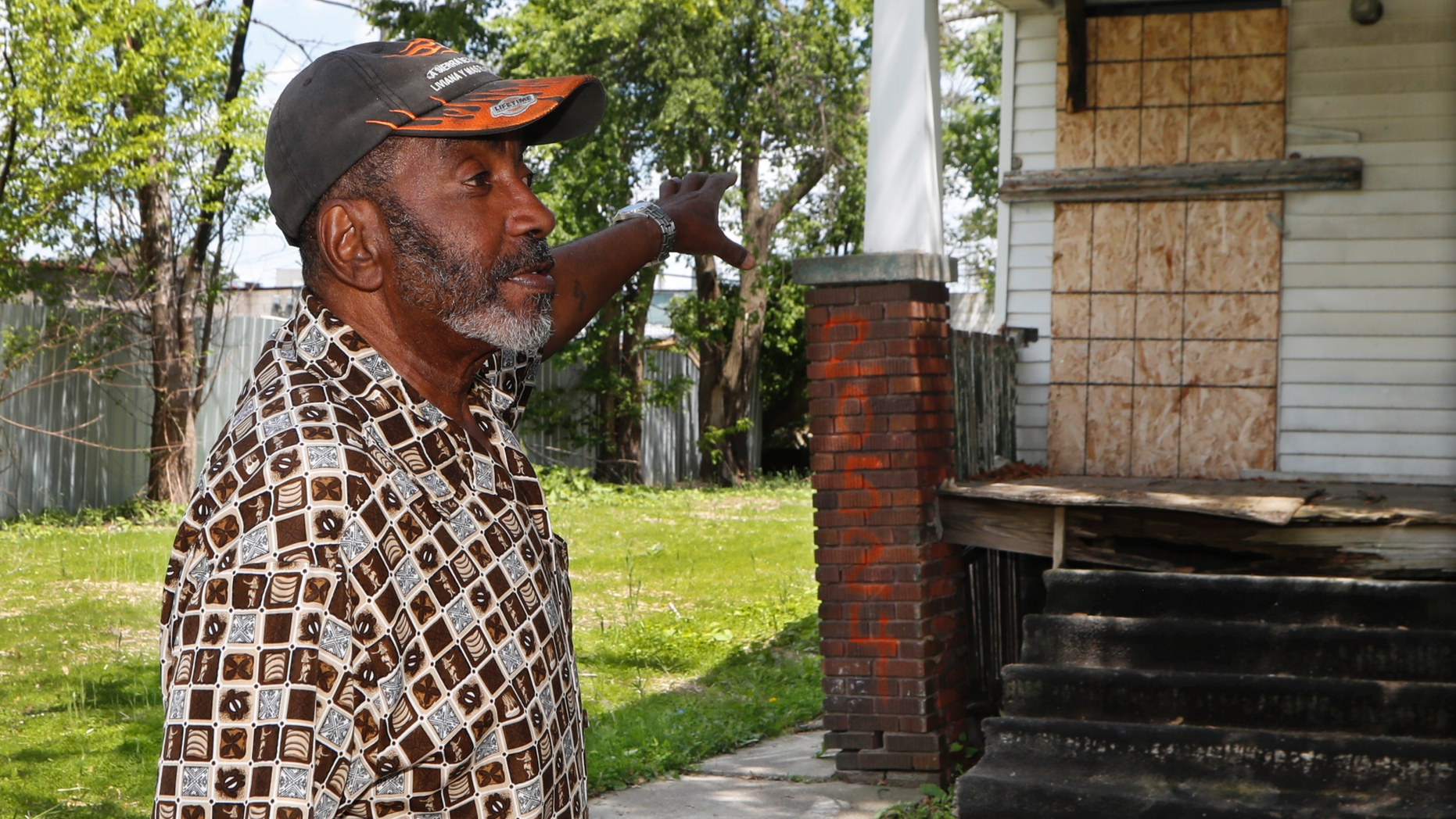 In a photo from Tuesday, June 11, 2019, Stanley Allen talks about an empty house next to his in Detroit. Hundreds of vacant houses in Detroit are being boarded up as the city responds to safety concerns following the arrest of a man suspected of killing at least three women. Since Friday, plywood has been nailed across doors and lower-level windows on more than 120 houses just south of the city’s northern limits. (AP Photo/Carlos Osorio)

DETROIT – Stanley Allen mowed the lawn at a vacant house next to his Detroit home as teams of police and city workers scoured nearby empty houses as part of an investigation into a suspected serial killer who used similar structures as stash houses for the bodies of at least three women.

Later, Allen sat on the front porch of his west side home where he’s lived for 12 years, surrounded by blight, and looked down the street as city workers boarded up another vacant house.

Police and city workers had been searching for bodies, or decomposed remnants of potential additional victims. And in their wake, they left behind boarded-up houses to keep trespassers out.

Deangelo Martin, 34, was arrested last week and charged in a separate case in which a 26-year-old woman was stabbed and sexually assaulted, but escaped. He has not been charged in the slayings.

“What we’re talking about right now is nothing new” ,” the 70-year-old Allen said of Detroit’s decades-long battle against abandonment and other blight as the city’s population plummeted by more than one million people. “Now, it’s reached somebody’s nerve that they want to do something.”

Allen’s own small, tidy home on Derby Street is flanked by an empty lot and another vacant house near Detroit’s northern city limits. Still another vacant home stands two doors down. Across the street, two lots sit barren but for a thicket of overgrown weeds and mangled trees that throw heavy shade on a squatter-occupied house.

Responding to the bodies found between March and last week, the city has added more urgency to an existing program that already has boarded up thousands of vacant houses across Detroit.

On Tuesday, officers combed noxious and weed-choked backyards and nosed through dank, empty houses on Derby and surrounding streets, stepping carefully amid piles of debris before giving the all-clear to other city workers who in auto assembly line fashion nailed boards tightly to doors and windows before moving on to the next house.

Eventually, the houses will be demolished, like thousands before them. In the meantime, they pose a threat when open to trespass.

More than 120 houses were searched and boarded up through Tuesday in the sparsely populated neighborhood straddling the east- and west-side boundary of the 139-square-mile city. Other parts of the east side also were checked. Police looked first for corpses in each house and cadaver dogs were called to some Friday and Saturday. Officers stumbled upon some dead pit bulls in one house, said Crystal Perkins, a city project manager and analytics specialist.

Plans are to board up about 2,000 vacant houses across Detroit by summer’s end. Officials hope to do about 200 houses each week, Perkins said.

Detroit’s effort to eradicate blight is not new. It’s been a decades-long battle that went into overdrive following the city’s 2014 exit from the largest municipal bankruptcy in U.S. history.

About 1.8 million people lived in the city during the 1950s. White flight to the suburbs and simmering hostilities between blacks and the city’s mostly-white police force that exploded in a race riot in 1967 helped spur the exodus of people in the 1960s and early 1970s. Thousands of middle-class African-Americans followed, mostly to suburban communities just outside Detroit.

The 2008 financial crisis and national housing bust slammed Detroit and magnified the ongoing battle against blight. In some neighborhoods today, abandoned houses and lots outnumber families.

Six years ago, Detroit was reported to have at least 30,000 empty houses and 20 square miles of vacant land. More than 18,000 vacant structures have been demolished since 2014. About 19,000 have been boarded up in the past 20 months, according to Mayor Mike Duggan’s office.

By September, “we will be to the point where every vacant house in the city that isn’t too damaged to board or isn’t about to be demolished will be boarded and secured,” spokesman John Roach said.

About 1,000 vacant houses near and on the city’s east side where the bodies of Nancy Harrison, 52, Trevesene Ellis, 53, and Tamara Jones, 55, were found are being boarded first. They will be followed by another 1,000 on the west side.

Jones’ badly decomposed body was found last week. Ellis’s body was discovered May 24, while Harrison’s corpse was found March 19. Each is believed to have worked in the sex trade, according to police.

Police Chief James Craig has said the women could have been lured into blighted houses, raped and killed.

Craig said investigators see similarities in the three deaths and assaults on at least two other women. Police also say Martin is known to have frequented the neighborhood where houses currently are being boarded up.

Investigators continue to receive tips in the case and officers are soliciting information from residents living near vacant houses which often are used in Detroit and other cities by drug dealers, drug users and for prostitution.

In Detroit, many residents learn early to avoid passing too closely to vacant homes, choosing to walk in the middle of the street instead of on the sidewalk.

Allen knows the problems and dangers all too well.

Like the crews securing houses during the past week, he occasionally nails boards across the doorways of the house next door when they mysteriously get ripped away. Several years ago, he went to investigate after noticing the rear door ajar. A man was inside.

For now, the boards remain.

Fears of a serial killer operating in her neighborhood and the plethora of vacant houses trouble Vernita Newton, who has lived on Derby for about 22 years and keeps pet dogs for safety, including one she described as “kind of aggressive when someone is too close.”

Newton watched Tuesday as officers searched an empty house next door in advance of it being boarded up.

“If I see it has been removed,” Newton said pointing to another house with a boarded front door, “that means somebody has tampered with it.”

Boards help, she said. “I feel safer as long as I’m in my area.”

Michigan man held for spying in Russia was frequent visitor

As a staff sergeant with the Marines in Iraq, Paul Whelan enjoyed fine cigars and showed an affinity for Russia — even spending two weeks of military leave in Moscow and St. Petersburg instead of at home in the U.S. with family and friends.