TOKYO – Japanese internet company SoftBank has reported a 36% increase in profit for the fiscal year through March from the previous fiscal year, partly on gains from its Vision Fund.

After the killing of Saudi journalist Jamal Khashoggi, SoftBank has said it will diversify its funding source for investments. Much of the Vision Fund money had come from Saudi Arabia.

BEIJING – A Chinese court has held an appeal hearing for a Canadian who was sentenced to death for drug smuggling in a case that has deepened a diplomatic rift between the countries.

No decision was immediately announced after the hearing Thursday morning. Robert Schellenberg was initially sentenced to 15 years in November, only to be handed the death sentence at a hastily scheduled January retrial.

That came after Canada arrested Meng Wanzhou, chief financial officer of Chinese telecom giant Huawei, at the request of the U.S. in December. Days later, two Canadians were detained in China in apparent retaliation.

Iran firefighters put out blaze at historic bazaar in Tabriz

TEHRAN, Iran – Iranian media say firefighters managed to put out a blaze that erupted at the historic market in the northwestern city of Tabriz.

Thursday’s report by the official IRNA news agency says some 16 people were slightly injured in the fire, which erupted around 9 p.m. on Wednesday at the Bazaar of Tabriz, which dates back 1,000 years.

IRNA says it took six hours to extinguish the fire. About 150 of the market’s 5,500 shops were damaged.

The bazaar has been a UNESCO World Heritage Site since 2010 and was mentioned by Marco Polo when he travelled the Silk Road in the Middle Ages.

There was no word on what started the fire. The Bazaar of Tabriz has seen several fires over the past years due to disregard of safety measures.

Malaysian PM says no timetable for handing over power PUTRAJAYA, Malaysia – A year after his election victory, Malaysian Prime Minister Mahathir Mohamad has defended his government’s record but gave no timetable for handing over power to his successor Anwar Ibrahim.

Mahathir says there were hiccups in pushing through some reforms because of insufficient support in Parliament for the required constitutional changes.

The 93-year-old Mahathir has said he needed two years to fix the country’s problems after ousting a scandal-plagued government. Uncertainties over the timing of the handover rattled some investors who fear it could disrupt the economy.

Mahathir told foreign journalists Thursday that he is an “interim prime minister” but there was no fixed period for him to leave. He says the transition will be smooth as any changes by Anwar will “not be radical.”

Anti-Kurdish protests in east Syria could endanger US plans BEIRUT – The U.S.-backed Syrian Democratic Forces defeated the Islamic State group in Syria in March, but the Kurdish-led force is now facing protests by local Arab tribesmen in eastern Deir el-Zour province — territory once held by IS.

The protesters are demanding better services, jobs and a bigger role in taking decisions in the predominantly Arab oil-rich and fertile region.

The demonstrations in more than a dozen villages in the eastern province are limited for now, but if they turn to an all-out uprising against the SDF, it could be a blow to Washington and President Donald Trump’s plans to reduce America’s military presence in Syria.

Several rounds of talks between the SDF — founded in 2015 to fight IS — and local officials have so far failed to make progress.

The self-governing island’s President Tsai Ing-wen presided over a ceremony Thursday in the southern port city of Kaohsiung, saying submarines were an effective way to deter a foe from surrounding the island by sea.

Taiwan operates four aged submarines but pressure from China has prevented it from buying more abroad. Plans call for the shipyard to produce eight diesel craft.

Taiwan relies on America for much of its defense needs, but the U.S. now only produces nuclear powered submarines. Holland’s decision to sell Taiwan two 30 years ago resulted in a major diplomatic rift with Beijing.

Tsai has made reviving Taiwan’s indigenous armaments industry a priority for her administration.

In the images, the 71-year-old Sheikh Khalifa wears white sneakers under his traditional robes.

He is greeted by Sheikh Mohammed bin Zayed Al Nahyan, the powerful crown prince of Abu Dhabi who analysts believe runs day-to-day affairs in the UAE.

Sheikh Khalifa became the UAE’s president in 2004. He is also the ruler of Abu Dhabi, the oil-rich capital of the UAE’s seven sheikhdoms.

Sheikh Khalifa suffered a stroke on Jan. 24, 2014, and underwent emergency surgery. He has rarely been seen in public since.

In the images, the 71-year-old Sheikh Khalifa wears white sneakers under his traditional robes.

He is greeted by Sheikh Mohammed bin Zayed Al Nahyan, the powerful crown prince of Abu Dhabi who analysts believe runs day-to-day affairs in the UAE.

Sheikh Khalifa became the UAE’s president in 2004. He is also the ruler of Abu Dhabi, the oil-rich capital of the UAE’s seven sheikhdoms.

Sheikh Khalifa suffered a stroke on Jan. 24, 2014, and underwent emergency surgery. He has rarely been seen in public since.

After failed military uprising, No. 2 leader of Venezuelan congress is towed to jail in car

The No. 2 leader of Venezuela’s opposition-controlled congress was arrested by security forces Wednesday as President Nicolás Maduro’s government began going after foes tied to the failed attempt to stir up a military uprising last week.

National Assembly Vice President Edgar Zambrano was leaving his Democratic Action Party’s headquarters when he was surprised by a commando unit from the feared SEBIN intelligence agency. The unit members surrounded his car, according to reports.

A half-hour later, the officers towed the vehicle away with the lawmaker still inside, at the same that Maduro was speaking live on state TV and inaugurating an agricultural project. Neighbors looking on, shouting, “Assassins!” as the heavily armed agents pulled away. 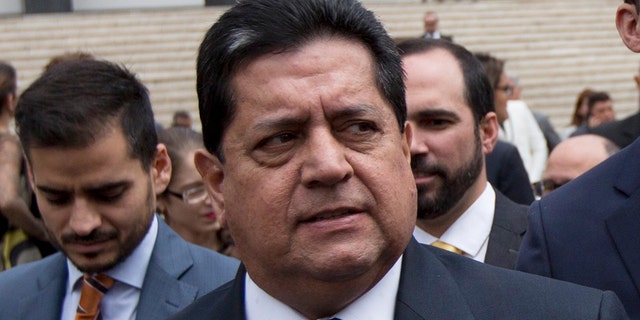 The arrest was the first following a fizzled uprising that started early on April 30 outside a Caracas airbase. It was led by Juan Guaidó, head of the National Assembly, who is leading the U.S.-backed effort to end what he calls Maduro’s dictatorship.

Zambrano, 63, was one of the first opposition leaders to answer Guaido’s call for an insurrection, going to the bridge in Caracas where the opposition leader had appeared at dawn with a small cadre of soldiers ready to rebel against Maduro.

A lawyer by training, Zambrano is seen as a conciliatory figure within the opposition who is close to Henry Ramos, the former head of congress, who has been accused of taking part in an earlier alleged conspiracy to oust Maduro. He took up his role as Guaido’s deputy as part of a power-sharing arrangement among the biggest parties.

Government officials had announced that Zambrano and eight other opposition lawmakers faced investigation on charges of “betraying the homeland” and “instigating an insurrection,” for their roles in last week’s unrest.

Gathered Wednesday at the University of Sao Paulo, the former officials issued a blistering statement on what they called the government’s attacks on public policies that protect the ecosystem.

They said the Bolsonaro government has installed a sense of “impunity” that may favor deforestation in the Amazon, the vast expanse of rain forest whose existence many scientists consider vital to curbing climate change.