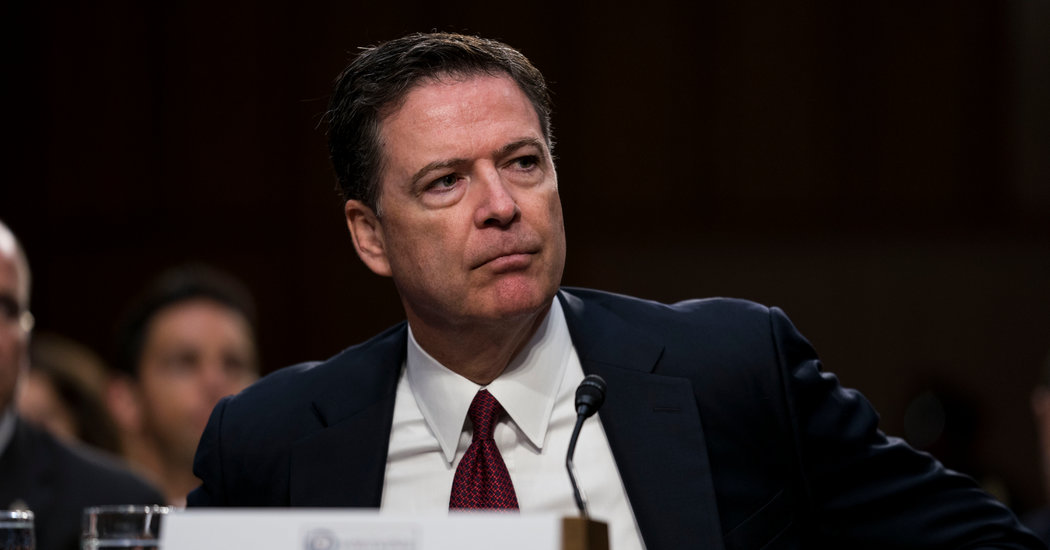 WASHINGTON — The former F.B.I. director James B. Comey violated policy by disclosing memos about his interactions with President Trump to people outside the bureau, said a blistering Justice Department inspector general report released on Thursday, admonishing him for setting “a dangerous example” for officials with access to government secrets.

The inspector general, Michael E. Horowitz, faulted Mr. Comey for releasing the memos to his lawyers, which officials retroactively determined contained classified information, but prosecutors declined to charge him. Mr. Comey, who gave one memo to a confidant who provided its contents to The New York Times, has said he helped make the information public in part to bring about the appointment of a special counsel.

“Comey violated F.B.I. policy and the requirements of his F.B.I. employment agreement when he chose this path,” the report said.

Mr. Trump and his allies are sure to use the report’s conclusions to attack Mr. Comey, whom the president fired abruptly in 2017 and partly blames for opening the Russia investigation, which threatened his presidency from its inception.

The report is the latest chapter in the story of Mr. Comey, who was castigated last year as part of a broader inspector general’s investigation that examined his handling of the Hillary Clinton email inquiry during the 2016 presidential campaign. In trying to protect the F.B.I., the earlier report said, Mr. Comey instead damaged its reputation.

Mr. Comey responded on Thursday by noting that the new report found he had broken no laws and criticizing those who had accused him of lying or leaking information.

“I don’t need a public apology from those who defamed me, but a quick message with a ‘sorry we lied about you’ would be nice,” he wrote on Twitter, challenging his critics to stop trusting “people who gave you bad info for so long, including the president.”

Mr. Comey wrote memos after meeting with Mr. Trump in the first days and weeks of his presidency, saying later that he wanted to document the encounters because he worried that the president would lie about their discussions. Mr. Trump and his allies accused Mr. Comey of illegally leaking the memos as they tried to undermine his standing as a key witness in the investigation by the special counsel, Robert S. Mueller III.

Mr. Comey has said he would not do anything differently if faced with the same set of choices. Rod J. Rosenstein, the former deputy attorney general, has said that Mr. Comey’s intransigence was partly why he backed firing him.

At issue in part is who owns the information in the memos: Mr. Comey or the F.B.I. While Mr. Comey said that he believed that two of his memos were his personal documents, all of the senior leaders interviewed by the inspector general disagreed, believing they were the property of the F.B.I.

Mr. Comey kept four memos inside a safe at his home and shared details about one with Mr. Richman, who told a Times reporter about its contents. Mr. Comey later sent some of the memos to Mr. Richman and his other lawyers, David Kelley and Patrick Fitzgerald. The F.B.I. eventually deleted the memos from its computer systems.

The contents of the memo that Mr. Richman shared detailed a private dinner Mr. Comey had with the president — itself an unusual encounter — where Mr. Trump demanded Mr. Comey’s loyalty. That memo contained no classified information, officials later determined.

The reaction to the memos, first revealed in Times articles in the days after his dismissal two years ago, was swift. Angered by their accounts of his demands for loyalty from typically independent law enforcement officials, the president threatened retaliation. Close aides to Mr. Comey also told the inspector general they were “stunned” and “shocked” to learn he had relayed the details of his encounters with the president to a reporter through Mr. Richman.

In the days after Mr. Comey was fired and the first Times article was published, the F.B.I. began investigating whether the president obstructed justice and opened a counterintelligence inquiry into whether he was secretly working on behalf of Russia. And one day after another article about a Comey memo revealed the president’s request that the F.B.I. end an investigation into Michael T. Flynn, then the national security adviser, Mr. Rosenstein appointed the special counsel.

Inside the F.B.I., members of Mr. Comey’s inner circle were forced to deal with the fallout from Mr. Comey’s revelations, the inspector general found, even as they confronted the investigations into Mr. Trump, which themselves had outsize political implications.

Former aides to Mr. Comey, including the former F.B.I. lawyers Lisa Page and James A. Baker, along with the senior agent Peter Strzok, were assigned to examine the seven memos to determine whether they contained classified information. The found that four of the memos had small amounts of classified details, and the others were designated as unclassified but “for official use only.”

Congress made the memos public in April 2018 with some information blacked out, and Mr. Comey wrote about them in a book published last year.

Even if he believed that disclosing details about Mr. Trump’s actions was the right course of action, Mr. Comey nonetheless hurt the F.B.I., which depends on its employees to keep sensitive information private, the report said.

“Comey failed to live up to this responsibility,” the inspector general concluded, then noted its earlier criticism of Mr. Comey’s handling of the Clinton email investigation.