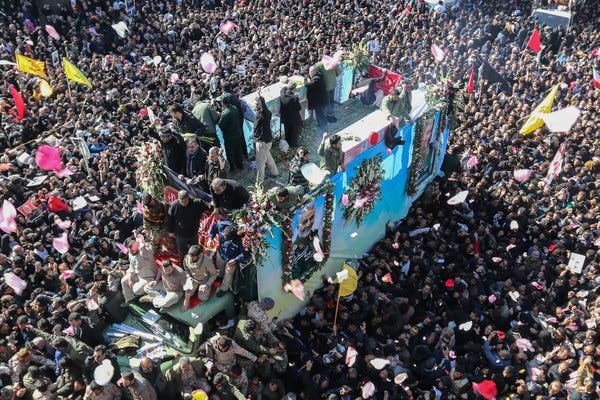 Mourners gathered around a vehicle carrying the coffin of Maj. Gen. Qassim Suleimani in Kerman, his hometown, on Tuesday.Credit…Atta Kenare/Agence France-Presse — Getty Images

Iranian state-run news outlets reported a deadly stampede during the funeral procession for Maj. Gen. Qassim Suleimani in his hometown, Kerman, in southeastern Iran, on Tuesday.

Millions were reported to have flooded the town’s streets to witness the procession for the general, who was killed in an American drone strike in Baghdad last week. His death has fanned smoldering tensions between the United States and Iran, and fueled fears of a broader conflict.

Pirhossein Koulivand, head of the Iranian emergency medical services, did not immediately detail the number of victims, according to several of the outlets, but at least 35 people may have been killed, one news service reported, according to The Associated Press.

Images and videos posted on social media showed the aftermath of the crush, with emergency workers and bystanders attempting to resuscitate people lying on the ground. The lifeless bodies of other victims, jackets covering their faces, could be seen nearby.

The general’s body had been flown to Kerman after a funeral in Tehran on Monday that had brought even bigger crowds into the streets of the Iranian capital.

In a fiery speech made moments before Maj. Gen. Qassim Suleimani was buried in his hometown, the leader of Iran’s Islamic Revolutionary Guards Corps vowed to “set ablaze” places where Americans and their allies live.

“We will take revenge; a revenge that will be tough, strong, decisive and finishing and will make them regret,” the paramilitary group’s leader, Hossein Salami, said Tuesday in a front of a crowd of mourners. “We will set ablaze the place they like, and they know where it is.”

“Today, the seeds of hatred for the U.S. have been sown in the hearts of Muslims,” he said, according to Fars, the state news agency.

The pledge to seek vengeance echoed the rhetoric of many of the country’s leaders since General Suleimani’s killing on Friday. “Death to Israel,” the crowd chanted back, according to news reports. Israel, a close ally of the United States, has long been an enemy of Iran.

Thousands of mourners, dressed in black and carrying photos of General Suleimani, crowded the central square of Kerman, where the general’s body was taken for burial after a funeral procession Monday in Tehran, the capital.

Before arriving in Kerman, the general’s remains were taken to the holy city of Qom, where thousands of residents came out, hoping for a chance to touch the coffin of a man the state has declared a martyr.

On Monday, Ayatollah Khamenei wept and offered prayers over General Suleimani’s coffin at the massive state funeral. The ayatollah had a close relationship with the general, who was widely considered to be the second most powerful man in Iran.

General Suleimani’s successor swore revenge during Monday’s ceremony, while chants of “Death to America” rang out from the crowds in the capital.

State-run news outlets reported that millions had gathered in Tehran, and images showed a sea of mourners, many wearing black and waving the Iranian flag.

“God the almighty has promised to get his revenge, and God is the main avenger,” said Esmail Ghaani, the Iranian general who will succeed General Suleimani as head of the Quds Force, the foreign expeditionary arm of the Revolutionary Guards Corps. “Certainly, actions will be taken,” he added.

In Jerusalem and elsewhere across the Middle East, United States embassies warned Americans of potential attacks from Iran, as Iranian generals vowed to avenge the senior commander killed in an American drone strike.

In Jerusalem, the embassy told Americans on Monday to watch out for “mortars and rocket fire.” A day earlier, the United States Mission in Saudi Arabia had warned citizens to be prepared for “missile and drone attacks.”

At General Suleimani’s funeral in Tehran on Monday, military commanders promised vengeance. Iran’s supreme leader, Ayatollah Ali Khamenei, told advisers that any retaliation against the United States should be direct, proportional and carried out openly by Iran.

That is a startling departure for the Iranian leadership, which has typically cloaked its attacks behind the actions of proxies it has cultivated around the region. But in the fury generated by the killing of General Suleimani, a close ally and personal friend of the supreme leader, the ayatollah was apparently willing to cast aside those traditional cautions.

In Israel, the United States Embassy on Monday issued a security alert for the entire country and warned Americans of potential mortar and rocket attacks.

“Out of an abundance of caution, the Embassy strongly encourages U.S. citizens to remain vigilant and take appropriate steps to increase their security awareness, as security incidents, including rocket fire, often take place without warning,” the embassy said in an alert published on its website.

The United States Mission to Saudi Arabia on Sunday warned Americans in the kingdom to be aware of a “heightened risk of missile and drone attacks.”

American embassies across the region have been on heightened alert since Dec. 31, when militants, backed by the Iranian government, stormed the embassy in Baghdad. President Trump said the assault was organized by General Suleimani.

The Iranian Parliament on Tuesday passed a bill declaring the American military’s top leadership to be “terrorists,” subject to Iranian sanctions, according to news reports in state media.

The bill aimed at the Pentagon’s top brass mirrored a Trump administration policy implemented in April that imposed economic and travel sanctions on the Islamic Revolutionary Guards Corps as well as organizations, companies and individuals with ties to it.

That policy represented the first time an arm of a sovereign government had been designated a terrorist organization.

The Defense Department justified the killing of General Suleimani in part because of the Guards Corps’ terrorist designation. General Suleimani led the paramilitary organization’s Quds Force, which conducted intelligence-gathering and attacks outside of Iran’s borders.

Parliament expedited the bill through an emergency process, according to the semi-official Tasnim News Agency.

Also on Tuesday, Parliament allocated $223 million to the Quds Force to “avenge” General Suleimani’s death, according to Fars, the state news agency.

Mark T. Esper, the secretary of defense, said striking Iranian cultural sites with no military value would be a war crime, putting him at odds with President Trump, who has insisted that such places would be legitimate targets. The president’s threats generated condemnation at home and abroad while deeply discomfiting American military leaders who have made a career of upholding the laws of war.

The furor over the threat to Iranian antiquities was a classic controversy of Mr. Trump’s own creation, the apparent result of an impulsive threat and his refusal to back down in the face of criticism. While Mr. Trump declared on Saturday that the United States had identified 52 potential targets in Iran, none of them qualified as cultural sites, according to an administration official who asked not to be identified correcting the president.

Audrey Azoulay, the director-general of UNESCO, met with the Iranian ambassador to the organization on Monday to discuss the current situation, and issued a statement pointing to international agreements that condemn acts of destruction of cultural heritage.

“Ms. Azoulay stressed the universality of cultural and natural heritage as vectors of peace and dialogue between peoples, which the international community has a duty to protect and preserve for future generations,” UNESCO said in the statement.