A number of Delta employees are itching to get rid of the company’s new uniforms.

Hundreds of Delta Air Lines employees have filed a lawsuit against Land’s End — which produced the uniforms for the airline in 2018 — claiming the chemicals used in the manufacturing of their work-mandated attire has caused itching, rashes and breathing difficulties, among other health issues.

“These uniforms are high stretch, wrinkle and stain-resistant, waterproof, anti-static, and deodorizing. Lands’ End used various chemical additives and finishes to achieve these characteristics,” the lawsuit alleges, according to The New York Post.

Additional issues reported by Delta Air Lines employees include coughing, tightness of the chest, hair loss, hives and headaches, leading to “severe emotional distress” in some.

The lawsuit claims the health problems were reported soon after the uniforms were debuted in May 2018, and “continue to this day.”

Following the initial launch in 2018, Delta Air Lines said the uniforms were tested on 1,000 employees across 80 focus groups.

“When we began working with employees to design new uniforms, we wanted to improve design, fit and function, while ensuring the health and safety of all Delta people. That’s why we took three years to collect feedback and listen, including three months of testing live in the operation on 1,000 randomly selected employees,” the airline told Fox News in June 2018.

The airline also admitted that it had received “a few reports” of “potential chafing of skin irritation,” but claimed that the clothing articles believed to be responsible were optional.

The uniforms, which were designed by Zac Posen and consisted of 1.2 million individual articles of clothing, cost Delta Air Lines “probably in the $20 million range,” CEO Ed Bastian said at the time. 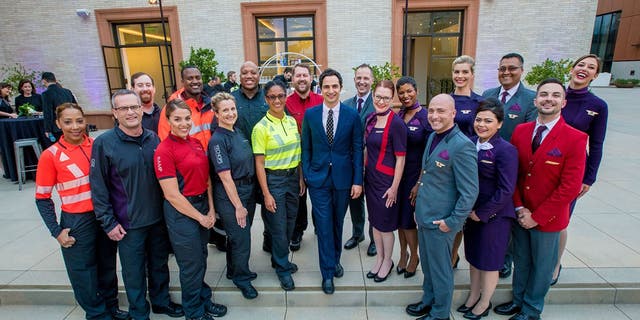 The uniforms, which were designed by Zac Posen, cost the airline somewhere “in the $20 million range,” Delta CEO Ed Bastian said at the time. (Delta Air Lines)

In a statement shared with Fox News on Friday, the airline claimed its own study verified the “highest textile standards” of the uniform.

“Our top priority continues to be the safety of our employees, which is why we invested in a rigorous toxicology study to determine if there was a universal scientific issue with the uniform,” the airline shared in a statement. “The results of the study confirm our uniforms meet the highest textile standards – OEKO-TEX – with the exception of the optional flight attendant apron, which we removed from the collection.”

The airline has earlier confirmed that the uniforms were provided to some 64,000 employees. About 24,000 of those are flight attendants, the lawsuit claims, according to the New York Post.

The workers are accusing Land’s End of negligence and providing defective uniforms, as well as the alleged failure to call on Delta to recall the uniforms.

A representative for Land’s End said the company would not comment on pending litigation.

Delta’s uniform issues are not unique to the industry. In Nov. of 2016, the Association of Professional Flight Attendants called on American Airlines to recall its then-new uniforms following complaints of rashes and hives. In March of 2017, American Airlines officially announced that alternatives would be provided.

Janine Puhak contributed to this report.