WASHINGTON — House Democrats pressed forward on Monday with the next phase of their impeachment inquiry, putting the final touches on an Intelligence Committee report expected to form the basis of their case that President Trump’s effort to pressure Ukraine to announce investigations of his political rivals was an abuse of power that warrants his removal from office.

Lawmakers from the panel reviewed the staff-written report for the first time on Monday evening, ahead of a scheduled Tuesday evening vote to transmit it to the Judiciary Committee. It is expected to conclude that Mr. Trump, working with allies inside and outside his administration, used the power of his office to pressure Ukraine to do his bidding in order to gain an advantage in the 2020 presidential race.

Though the factual conclusions are likely to closely track public witness testimony in recent weeks, key elements of the majority report remained shrouded in mystery on Monday night. It was not yet clear, for instance, whether Democrats would use the document to call for specific impeachment charges against Mr. Trump, or whether it would simply outline evidence of presidential wrongdoing and leave it to the Judiciary Committee, the arbiter of impeachment proceedings past, to make that judgment.

Either way, the vote on Tuesday will bring to a close more than two months of investigation by the intelligence panel and shift the case against Mr. Trump into the judiciary panel, which will oversee the drafting and debate of articles of impeachment in what is likely to be a messy public spectacle suffused with partisan rancor.

As the Democrats prepared their case, House Republicans moved to seize the narrative and spin it in the president’s favor, releasing their own report arguing against impeachment based on the facts both parties have reviewed.

In a 123-page document that echoed the defiant messaging that Mr. Trump has employed in his own defense, the Republicans did not concede a single point of wrongdoing or hint of misbehavior by the president. Instead, they concluded that Mr. Trump was acting on “genuine and reasonable” skepticism of Ukraine and “valid” concerns about possible corruption involving Americans, not political self-interest, when he pressed the country for investigations of his Democratic rivals.

Mr. Trump, who spent much of the day traveling to Britain to celebrate the 70th anniversary of the North Atlantic Treaty Organization, appeared to be preoccupied with the coming fight. He posted on Twitter from Air Force One about the weakness of the Democrats’ case and the strength of Republican unity. Not long after landing in London, the president lavished praise on the Republicans’ report, which he said he had read, and raised the prospect of unilaterally asking the Supreme Court to stop the House impeachment proceedings, a process enshrined in the Constitution, in its tracks.

“Great job!” Mr. Trump tweeted of Republicans. “Radical Left has NO CASE. Read the Transcripts. Shouldn’t even be allowed. Can we go to Supreme Court to stop?”

The Constitution puts the chief justice of the Supreme Court in charge of overseeing any impeachment trial in the Senate, but empowers the House and the Senate to carry out the proceedings as they see fit. The Supreme Court has no purview over the process.

As Washington re-engaged in the impeachment drama after Thanksgiving, the timetable for the process remained unclear. House leaders announced they would remain in session until Dec. 20, more than a week longer than initially planned, leaving open the possibility of a vote to impeach Mr. Trump days before Christmas. But with the Judiciary Committee scheduling only one hearing for this week, Democrats were facing a calendar squeeze that could make it difficult for them to complete the intricate impeachment process before year’s end.

The Judiciary Committee unveiled the list of constitutional scholars its members plan to question on Wednesday, when they convene their first formal impeachment session to help inform the debate over whether Mr. Trump’s conduct was impeachable.

The witnesses are Noah Feldman of Harvard Law School, Pamela S. Karlan of Stanford Law School, Michael J. Gerhardt of the University of North Carolina Law School and Jonathan Turley of the George Washington University Law School. Mr. Turley was invited by Republicans on the panel.

The Justice Department filed a brief before the United States Court of Appeals for the District of Columbia, seeking to block impeachment investigators from gaining access to secret grand jury evidence gathered by Robert S. Mueller III, the special counsel who investigated Russia’s 2016 election interference and the Trump campaign.

Lawyers for the House have argued that they need to see that material in part because it could further illuminate the question of whether Mr. Trump lied to Mr. Mueller, a matter they have said is part of their impeachment inquiry. But the House is likely moving too quickly for the courts to settle the case before an impeachment vote.

In the Republicans’ dissenting views, they argued that after two months of investigation, the evidence “does not support” that Mr. Trump withheld a coveted White House meeting for Ukraine’s president or nearly $400 million in security assistance for the country as leverage for securing the investigations. 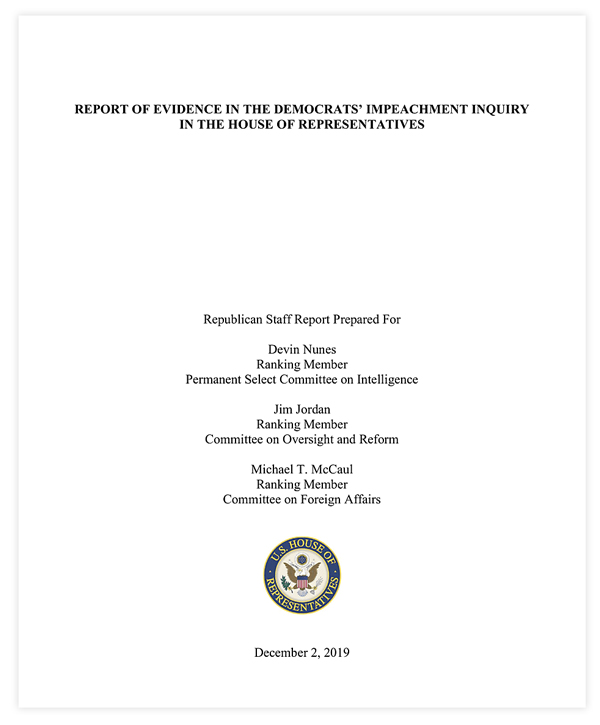 Read the House Republicans’ Report on the Impeachment Inquiry

Republicans on three House committees on Monday finalized a report documenting their impeachment defense of President Trump. The Democrats are expected to release their own report in the near future.

The conclusion is at odds with sworn testimony from senior American diplomats and White House officials who said they believed Mr. Trump sought to use American influence over Ukraine to suit his domestic political purposes, repeatedly pressing President Volodymyr Zelensky of Ukraine to announce investigations into former Vice President Joseph R. Biden Jr. and an unproven claim that Ukraine conspired with Democrats to interfere in the 2016 election.

Rather than take those assertions at face value, the Republicans charged that they came from civil servants who dislike Mr. Trump’s agenda and style and are therefore allowing themselves to be part of a push by Democrats to undo the results of the 2016 election and thwart Mr. Trump’s re-election chances in 2020.

“The Democrats’ impeachment inquiry is not the organic outgrowth of serious misconduct; it is an orchestrated campaign to upend our political system,” the Republicans wrote. “The Democrats are trying to impeach a duly elected president based on the accusations and assumptions of unelected bureaucrats who disagreed with President Trump’s policy initiatives and processes.”

The argument mirrored one made at the White House on Monday by Kellyanne Conway, Mr. Trump’s counselor, who sought to portray Democrats’ case as flimsy.

“One out of 12 people had ever talked to the president of the United States and met him or discussed Ukraine with him — that is just mind-boggling to me,” Ms. Conway said, referring to the number of current and former government officials who testified publicly in the inquiry. “And we are supposed to impeach the president for high crimes and misdemeanors for that reason?”

Ms. Conway also dared the chairman of the Intelligence Committee who has been leading the inquiry, Representative Adam B. Schiff of California, to testify publicly during the Judiciary Committee’s proceedings about his handling of the case. If he did, she promised to “show up on behalf of the White House,” which on Sunday declined to participate in the hearing scheduled for Wednesday.

Democrats are expected to argue the virtual opposite of the Republican report.

The Democrats’ case centers on a July phone call in which Mr. Trump pressed Mr. Zelensky to investigate Mr. Biden and the claim that Ukraine worked with Democrats to subvert the 2016 election. It is also likely to charge that Mr. Trump conditioned the White House meeting and military assistance money on a public commitment to the investigations.

Mr. Schiff indicated as much Monday when he said that the Republican report “ignores voluminous evidence that the president used the power of his office to pressure Ukraine into investigating his political rival by withholding military aid and a White House meeting the president of Ukraine desperately sought.”

He added, “In so doing, the president undermined our national security and the integrity of our elections.

The minority report was compiled by committee staff for the top three Republicans on the House Intelligence, Foreign Affairs and Oversight and Reform Committees.

It essentially formalized a range of defenses Republicans road-tested last month during two weeks of public impeachment hearings in the Intelligence Committee. For members of the Judiciary Committee and the larger Republican conference in the House, it provided several alternative tacks for defending Mr. Trump or at least arguing against impeachment.

If the Democrats’ case hinges on linking actions by Mr. Trump and his agents to a unified pressure campaign, the Republican defense is staked on pulling those pieces apart and offering an alternate explanation for each.

Many of the actions in question, Republicans argue, stem from Mr. Trump’s “longstanding, deep-seated skepticism of Ukraine due to its history of pervasive corruption.”

“Understood in this proper context, the president’s initial hesitation to meet with President Zelensky or to provide U.S. taxpayer-funded security assistance to Ukraine without thoughtful review is entirely prudent,” the Republicans wrote.

Likewise, they argued, there was “nothing wrong with asking serious questions” about Mr. Biden and his younger son, Hunter Biden, who served on the board of a Ukrainian energy firm when his father was vice president, or about “Ukraine’s attempts to influence the 2016 presidential election.”

Though some officials who testified before the inquiry said that Hunter Biden’s role had prompted concerns about the appearance of a conflict of interest, no evidence had emerged to support any accusations of wrongdoing. And Mr. Trump’s own former national security advisers testified that the concerns he raised to Mr. Zelensky about 2016 were conspiracies promulgated by Russia to absolve its own interference campaign in 2016 and harm American democracy. They said the president had repeatedly been told as much.

Republicans also argued there was “nothing inherently improper” with Mr. Trump empowering Rudolph W. Giuliani, his private lawyer who led the push for investigations, to help steer Ukraine matters, despite testimony that there was widespread alarm at Mr. Giuliani’s involvement.

The report also repeated familiar Republican grievances about the denial of “fundamental fairness” in the investigative process put forward by Democrats. Mr. Trump’s decision to discourage participation in the inquiry, they wrote, was “a legitimate response to an unfair, abusive, and partisan process, and does not constitute obstruction of a legitimate impeachment inquiry.”

Democrats do not see it that way, and have prepared a catalog of all of the ways that Mr. Trump has obstructed their inquiry that could form the basis for its own article of impeachment.