Ex-Cowboys great Drew Pearson disappointed after being passed over for Hall of Fame: ‘They broke my heart’

Former Dallas Cowboys great Drew Pearson was surrounded by family and friends when he realized he had been passed over for the Pro Football Hall of Fame Centennial Class on Wednesday.

A video showed Pearson upset and understandably frustrated when he found out he was not a part of the group that was going to be enshrined to the Hall of Fame this summer.

“They broke my heart,” Pearson says in the clip.

The former Cowboys receiver is the lone member of the 1970s All-Decade team who is not in the Pro Football Hall of Fame. He later told ESPN that he’s not giving up hope about one day making it to Canton, Ohio.

“It’ll stick with me until later today and after all these texts and internet stuff stops coming through, and I’ll move on,” he said. “This is the story of my life. Nothing has ever come easy. I came in here as [an] undrafted free agent. I had a bone disease as a kid, went to Tulsa, had three losing seasons in four years, three head coaches in four years, on probation three years, not getting drafted, signing for $150, making the team, overcoming the odds with 100 rookies in camp. Then turning that opportunity after making it. I made All-Pro my second year, had over 1,000 yards my second year.” 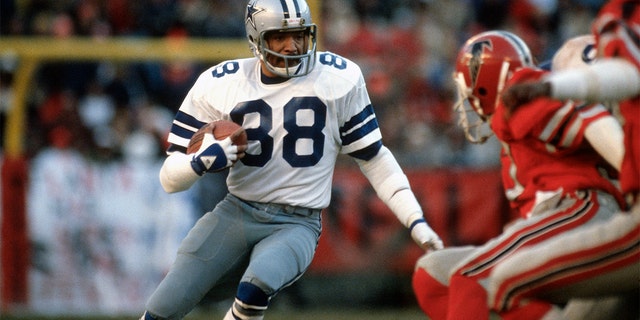 Drew Pearson played his entire career with the Cowboys. (Photo by Focus on Sport/Getty Images)

“If it happens, I’ll be so appreciative,” Pearson said. “I’ll still be the same excited because I think I deserve it and hopefully one day it happens. If it doesn’t, I can’t just wait around for that. I can’t sit and hope anymore.

“If you can’t get in on your merits as an All-Decade player of the ’70s and watch others who did make it that weren’t All-Decade players, I’m not discounting them,” he added. “All I’m saying is if they are, then I am too. That’s what’s frustrating. I respect the process, but I was disappointed with the way this played out.”