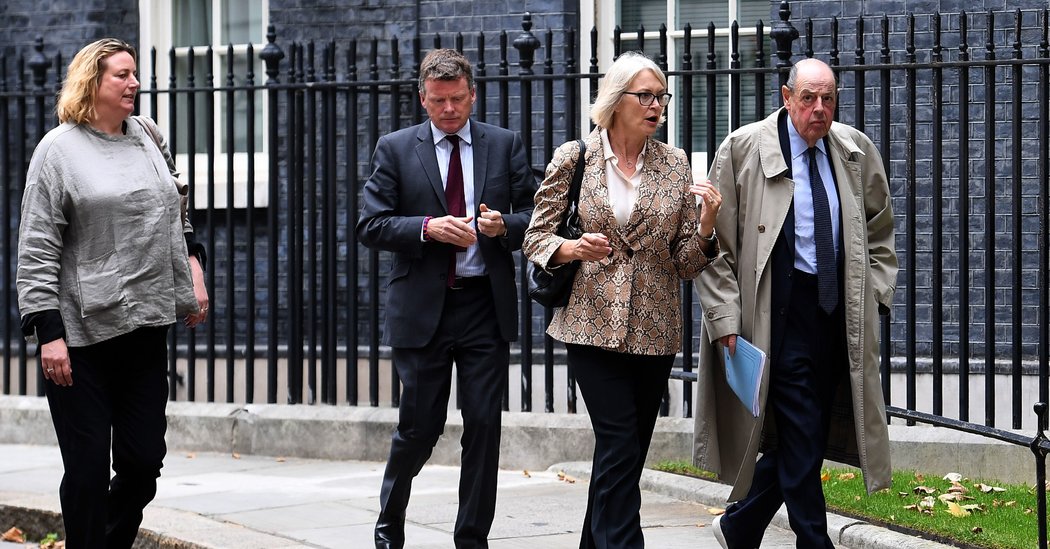 LONDON — Rising to speak before a half-empty House of Commons on Wednesday, Nicholas Soames, the grandson of Winston Churchill, choked up, fighting back tears.

Mr. Soames, 71, has served in Parliament for 37 years and is a popular figure, known to have a lively sense of humor. But he now was announcing his decision to retire from politics, a day after Prime Minister Boris Johnson had expelled him from the Conservative Party. He had joined a group of 21 Tory rebels who defied Mr. Johnson on Tuesday night by voting against legislation that would pave the way toward blocking a no-deal Brexit.

“I’m truly very sad that it should end in this way,” Mr. Soames said. “It is my most fervent hope that this house will rediscover the spirit of compromise, humility and understanding that will enable us finally to push ahead with the vital work in the interests of the whole country that has inevitably had to be so sadly neglected whilst we have devoted so much time to wrestling with Brexit.”

If Brexit is shaking the foundations of party politics in Britain, the expulsion and resignation of Mr. Soames is a moment that not long ago would have been unimaginable. It is especially searing given that Mr. Johnson, who cast him aside, considers Churchill one of his greatest heroes, and has written a biography of Britain’s wartime leader.

Mr. Soames, whose mother was Mr. Churchill’s youngest child, said he had voted against the Tory government three times in his 37 years but that this was the first time he had “the whip removed,” meaning he will no longer be allowed to represent his party in Parliament.

“I have been told by the chief whip, who is my friend and who I like very much, that it will be his sad duty to write to me tomorrow to tell me I have had the whip removed after 37 years as a Conservative member of Parliament,” he said Tuesday night in an interview with the BBC. “That’s fortunes of war. I knew what I was doing.”

Determined to deliver Brexit on Oct. 31 “come what may,” Mr. Johnson has become increasingly ruthless, exacerbating existing frictions within his party over Britain’s exit from the European Union. Since taking office in July, Mr. Johnson has purged cabinet ministers and ordered a five-week suspension of parliament as a tactic to limit its ability to challenge his plan to leave the European bloc with or without a deal.

But lawmakers struck back on Tuesday, aided by the Tory rebels, by wresting control of the Brexit agenda in a parliamentary vote. Next they are pushing through legislation to prevent a no-deal Brexit.

Mr. Soames said he thought the purge was part of a plan by Mr. Johnson to wage a general election as the candidate for the pro-Brexit crowd, to blunt the challenge of the Brexit Party of Nigel Farage.

“It is a pity — a great pity — that this has in my view all been planned,” Mr. Soames said. “This is exactly what they wanted, and they will try to have a general election which is what they wanted.”

The ousted, or, in technical terms, the deselected lawmakers are free to stand for Parliament as independent candidates in the next general election, but Mr. Soames said he would not.

From the outset of his political career, Mr. Soames was confronted with the shadow of his grandfather but managed to create his own space.

In 1952, when Mr. Soames was 5, he was oblivious to his grandfather’s significance. He told the Guardian newspaper that he had walked into Mr. Churchill’s bedroom one day and asked, “Is it true, grandpapa, that you are the greatest man in the world?”

Mr. Soames, who was knighted by Queen Elizabeth II for his services in politics, is also known to be brash. Guy Woodward, a journalist who interviewed him about his passion for wine, described the experience as bruising. “The Tory grandee doesn’t so much talk at you as through you, barely pausing for respite,” Mr. Woodward wrote in The Decanter Journal.

The Tory veteran, who has been married twice and has three children, has been accused of being one of the most sexist lawmakers in Parliament. In the book “Women in Parliament — The New Suffragettes,” at least six women accused Mr. Soames of verbal sexual harassment. Others accused him of making cupping gestures with his hands, suggestive of female breasts, the Independent newspaper reported.

Mr. Soames has dismissed the allegations as “nonsense” and “fiction” that had been made up to sell the book.

For his part, Mr. Johnson has repeatedly spoken of his deep admiration for Mr. Churchill’s leadership and marked the 50th anniversary of his death in 2014 by publishing a biography, “The Churchill Factor: How One Man Made History.”

In his introduction he wrote: “When I was growing up there was no doubt about it. Churchill was quite the greatest statesman that Britain had ever produced. From a very early age I had a pretty clear idea of what he had done: he had led my country to victory against all the odds and against one of the most disgusting tyrannies the world has seen.”

It turns out that deselection is another thing that Mr. Soames now has in common with his grandfather. Churchill himself was deselected in 1904 in an argument over free trade. Politically, he did recover.