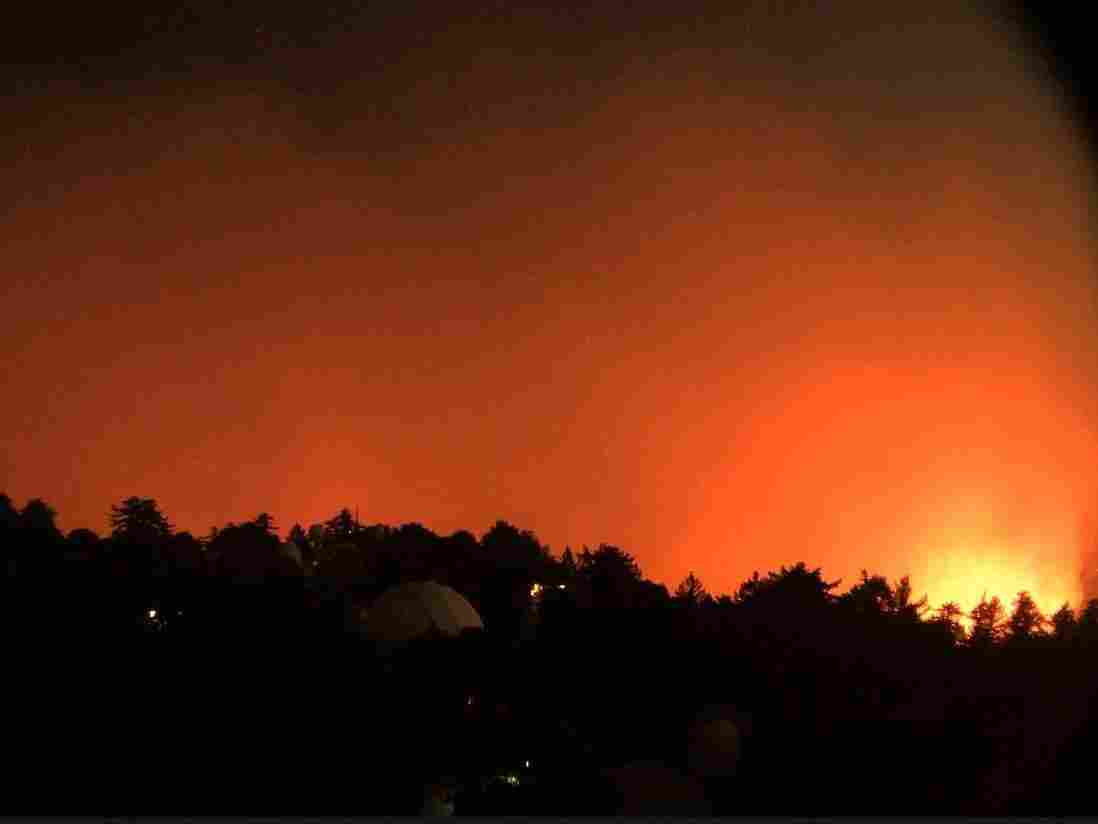 A view facing east from the Mount Wilson Observatory near Los Angeles shows the nearby flames of the Bobcat Fire early Wednesday. Screenshot by NPR/HPWREN hide caption 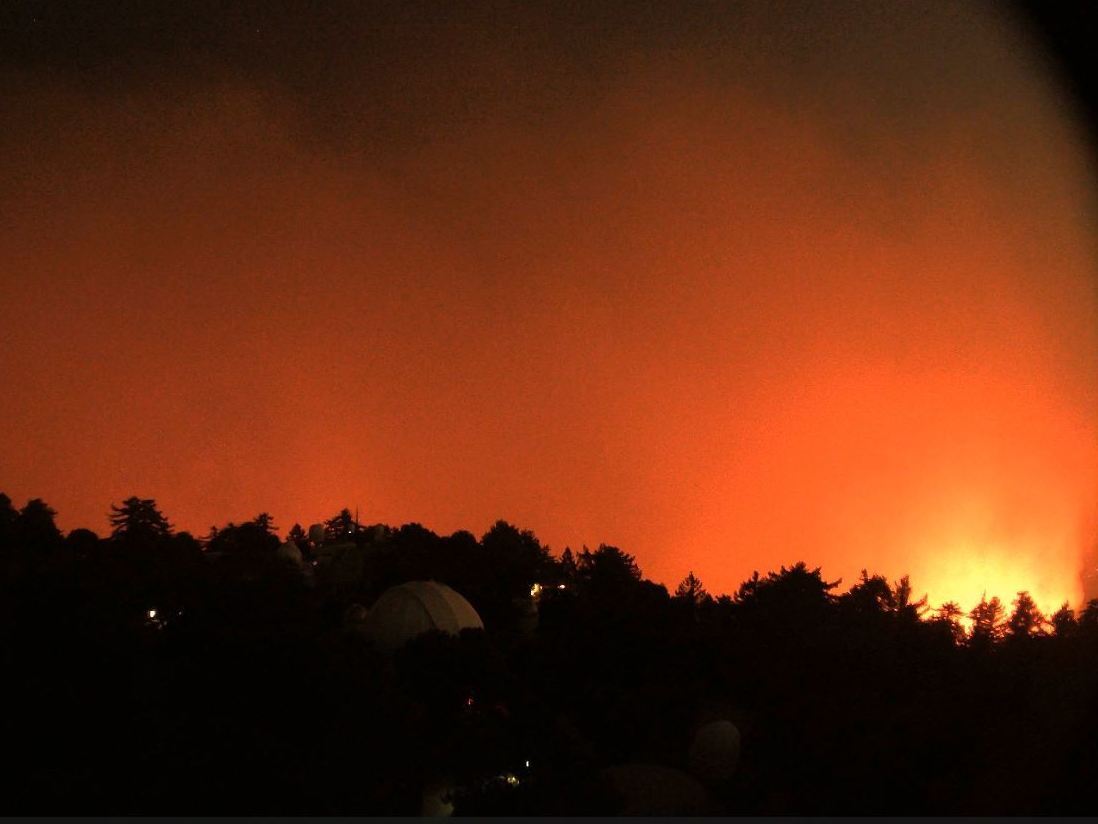 A view facing east from the Mount Wilson Observatory near Los Angeles shows the nearby flames of the Bobcat Fire early Wednesday.

Los Angeles’ Mount Wilson Observatory, the site of major 20th century scientific discoveries, has survived a terrifyingly close brush with a wildfire in the hills northeast of the city.

The Bobcat Fire came within 500 feet of the observatory on Tuesday afternoon. Crews gathered to fight the fire, and tracked vehicles with front blades cleared fire lines to protect the area.

We give our sincerest thanks to the firefighters who are on the ground defending our observatory as well as the pilots flying aircraft for fire suppression. Here’s a picture from of firefighters crossing the “Einstein Bridge” from the 100-inch dome. #BOBCATFIRE pic.twitter.com/yrbLPtnhJh

Their efforts were successful, and on Tuesday night the Angeles National Forest tweeted: “While there is still much work to be done in southwest and in the northern sections of the fire, your firefighters did incredible work around Mt. Wilson today.”

Tom Meneghini, executive director of the Mount Wilson Observatory, said in an email to NPR on Wednesday afternoon that he understands there will soon be “some major retardant and water drops on the section threatening the observatory.”

Kerri Gilliland of California Interagency Management Team 1 said Wednesday morning that the lines had held against the fire overnight, but increased activity south and southeast of Mount Wilson continues to be a threat.

Authorities said that dry fuels continue to be a risk factor, and increased fire activity over the next couple days is expected. In the nearby Cooper Canyon area, air tankers have been deployed to help contain a large spot fire north of Highway 2. 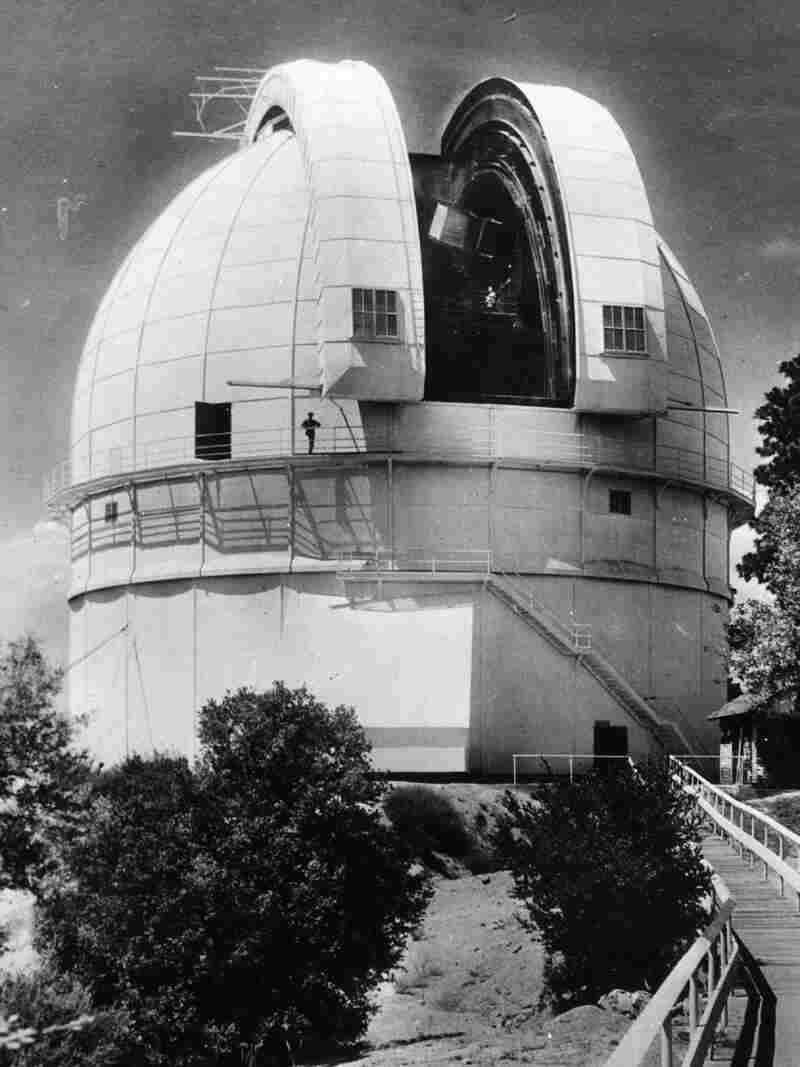 The same dry, isolated conditions that make Mount Wilson susceptible to wildfires are the same ones that made it perfect for stargazing, as LAist/KPCC’s Jacob Margolis reported:

” ‘Effectively [Edwin] Hubble discovered the universe in the 1920s up on Mt. Wilson,’ said John Mulchaey, director of the Carnegie Observatories in Pasadena, which owns the observatory.

“Scientists had long believed that the Milky Way was just about all there was to the universe.

“Then, in the early 1920s, Hubble focused the Mt. Wilson telescope on what was thought to be gas or matter floating through the Milky Way. Through a series of complex calculations, he figured out that it wasn’t dust, but an entire galaxy of its own, specifically the Andromeda galaxy.

“He’d continue to discover other galaxies throughout the 1920s, eventually making another big finding in 1929: that the universe was expanding.”

As the lights of Los Angeles grew brighter, the observatory became a less ideal place for viewing the heavens.

When there isn’t a wildfire or a pandemic, the observatory is open to the public for visits and celestial viewing through its telescopes.