A Florida sheriff’s deputy was placed on restricted duty after cellphone video showed him forcefully restraining a pepper-sprayed high school student, at one point hitting him in the head while he was on the ground.

Deputy Christopher Krickovich was ordered to surrender his gun and badge until an investigation into Thursday’s fight is completed by the Department of Internal Affairs, Broward County Sheriff Gregory Tony said.

“I wanted to assure you that this incident is being conducted under a thorough investigation,” Tony said in a video statement. “We will look at this as a fact-finding measure to make sure we hold folks accountable,” 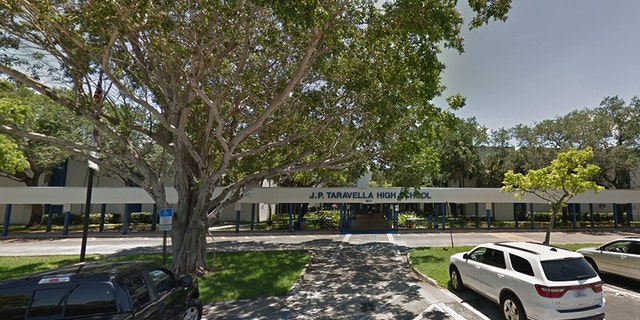 A Florida deputy was been placed on restricted duty after he was seen forcefully restraining a pepper-sprayed J. P. Tavarella High School student. (Google Street View)

Broward County Mayor Mark Bogen called for Krickovich to be fired and another deputy disciplined, writing on Twitter that their conduct was “outrageous & unacceptable.”

However, Jeff Bell, the president of the Broward Sheriff’s Office Deputies Association, criticized Tony’s decision, saying Krickovich and his colleagues were implementing the aggressive police tactics the new sheriff has pushed. After the shooting which killed 17 people at Marjory Stoneman Douglas High School last year, deputies were disciplined for not charging into the school. Former Sheriff Scott Israel was replaced by Tony earlier this year.

The video posted on social media showed Krickovich and Sgt. Greg Lacerra amid a crowd of mostly African American students from J.P. Taravella High School after a fight outside a suburban Fort Lauderdale McDonald’s. Krickovich wrote in his report that because of a large fight Wednesday at the shopping center where the restaurant is located, the two were stationed there Thursday in case of a new eruption. Bell said the Tamarac plaza has been a longtime afterschool trouble spot, with students threatening and harassing the mostly elderly clientele.

The deputies “did exactly what they were trained to do,” Bell said. He argued that Krickovich and the others were surrounded by 200 students and feared for their safety. He also said Tony should release the deputies’ body camera video, which he said would show why they reacted as they did.

MAN CHARGED WITH MURDER FOR ALLEGEDLY KILLING DAUGHTER, NIECE HE MAY HAVE FATHERED CHILD WITH: REPORT

Krickovich said Thursday’s fight ended before deputies could get there. He said as the crowd dispersed, Lacerra noticed a teen who had been told to stay out of the plaza after Wednesday’s fight. Krickovich said he arrested the teen for trespassing and put him on the ground, causing the teen to drop his cellphone. Then, he said, another teen in a red tank top bent down to pick up the phone.

Video from the incident then showed the teen in the red tank top standing up. He turned sideways and appeared to say something to Lacerra, who pepper-sprayed him and threw him to the ground. Krickovich jumped on the teen, forcing his head to the ground and punching him. A third deputy helped Krickovich pin the teen’s arms behind his back to be handcuffed as the video ended.

Krickovich said he pushed down on the teen because he was trying to get up and he feared the teen would try to fight him or run off.

“The three of us were outnumbered by the large group of students who were yelling, threatening us and surrounding us,” Krickovich wrote in a statement. “I had to act quickly, fearing I would get struck or having a student potentially grab weapons off my belt.”

The teen, whose name was not released, was charged with assaulting a police officer, resisting arrest and trespassing.