Former Clinton impeachment manager: Senate Dems want witnesses because House ‘did not do its job’ 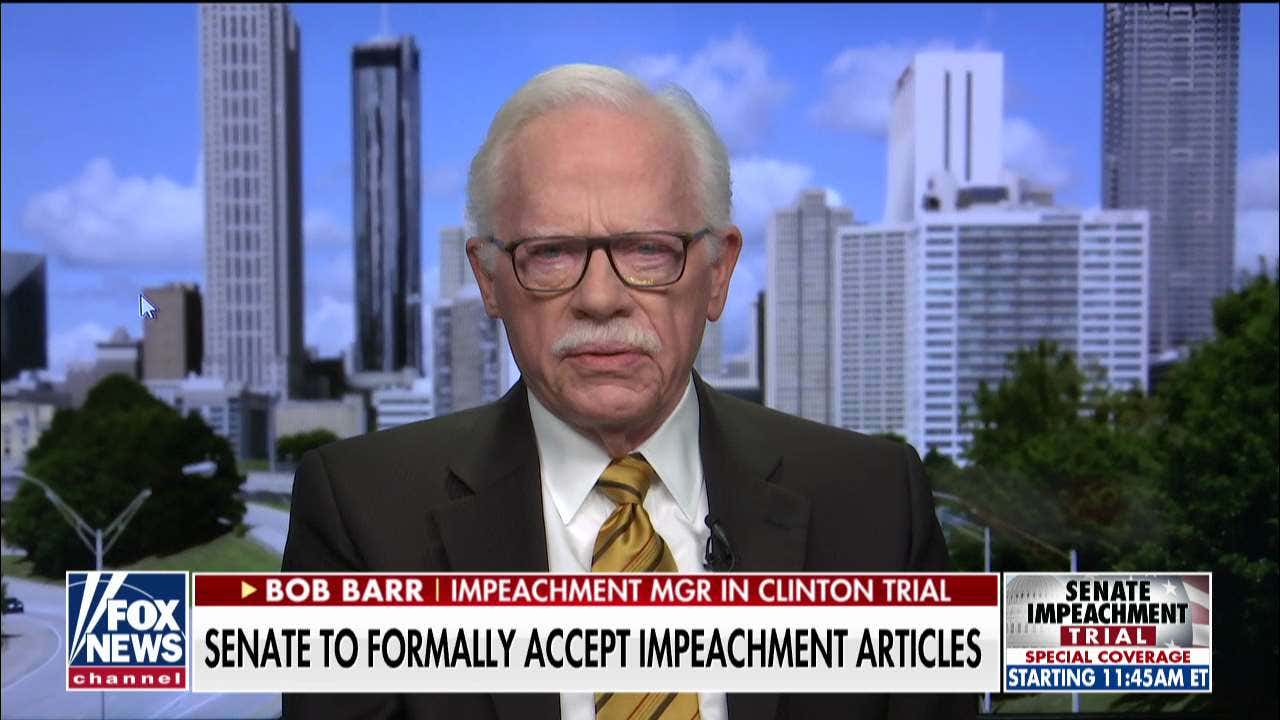 Bob Barr, who served as a House manager in the impeachment of President Bill Clinton, said Democrats want to call witnesses and are pushing for additional evidence to be presented in Trump’s impeachment trial because the House of Representatives “did not do its job.”

“Back in 1999 the Senate made very clear to us that they were not interested in handling this at all,” the former Georgia congressman said Thursdsay on “America’s Newsroom,” minutes before the Senate formally received the articles of impeachment,

“This time around there does seem to be more interest on the part of the Democrats to extend the trial and the evidence and the witnesses because the House did not do its job. It did not present a full, robust case, so the Democrat senators now realize that they better do that and that’s why they’re pushing so hard for witnesses and additional evidence,” Barr continued.

Shortly after Barr made the statements on “America’s Newsroom,” House Sergeant-at-Arms Paul Irving led a procession of Democratic “managers” across the Capitol and the upper chamber formally received the two articles of impeachment against Trump for charges of abuse of power and obstruction of Congress for his dealings with Ukraine.

The proceedings marked the formal start of the Trump impeachment trial a day after the House transmitted the articles of impeachment to the Senate following one month of House Speaker Nancy Pelosi withholding the articles.

Barr weighed in on the one-month delay, acknowledging the House had been dillydallying, something that he said did not happen when he was an impeachment manager more than two decades ago.

“We have certainly seen it now in the weeks that have gone by between the House passage of the two articles of impeachment and finally appointing House managers and conveying the articles over to the Senate,” Barr said. “That is not something that we did or even considered back in 1998 and in 1999.”

“We believed at the time that precedent and good procedure required that as soon as the House took action, we would then move to appoint the managers and send it over to the Senate,” he continued. “We didn’t wait around for public opinion to shift or for new evidence to come forward, we went over there right away so that the Senate could start its work.”

Barr also said he expects Senate Majority Leader Mitch McConnell, who has not yet revealed the rules governing the process, to mirror the procedures during the Clinton impeachment trial.

“By everything I’ve seen so far he seems to be moving in the direction of mirroring the procedures in 1999, which was to have a bifurcated trial,” Barr said.

“You have arguments first, some questions, and then the House, the Senate decides if they want witnesses.”

Barr said McConnell could choose to avoid a “procedural mess” by allowing the Senate Judiciary Committee to handle the impeachment case, adding that Senate rules allow for such a move.

“Under Senate rules, a committee of the Senate has the power to call witnesses and take testimony without any additional votes on the part of the Senate. So that would be a way to shift the venue so we don’t take up all of the time of the Senate and they don’t have to deal with all of the messes involved,” he added.