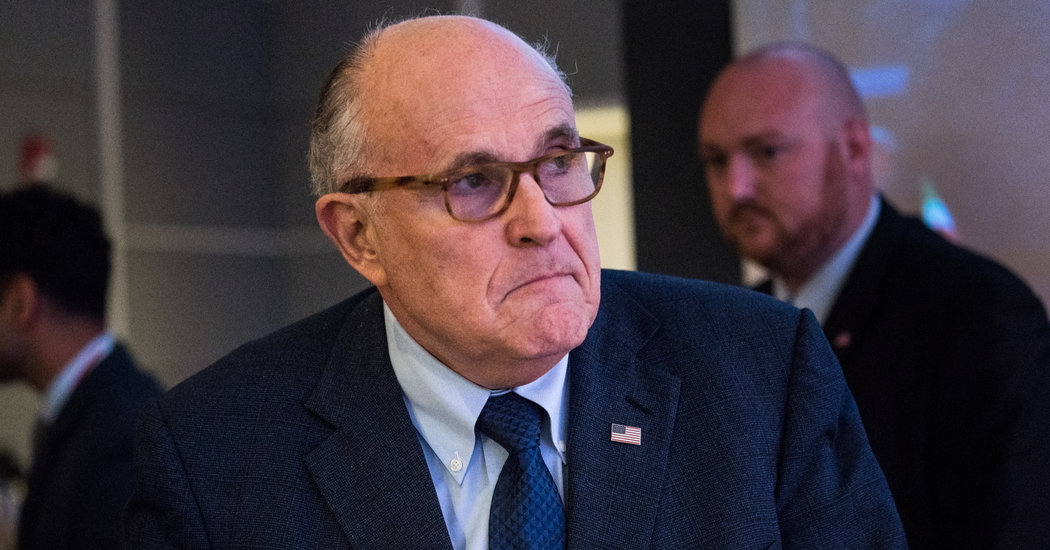 WASHINGTON — Even as Democrats intensified their scrutiny this week of Rudolph W. Giuliani’s role in the pressure campaign against the Ukrainian government that is at the heart of the impeachment inquiry, Mr. Giuliani has been in Europe continuing his efforts to shift the focus to purported wrongdoing by President Trump’s political rivals.

Mr. Giuliani, the president’s personal lawyer, met in Budapest on Tuesday with a former Ukrainian prosecutor, Yuriy Lutsenko, who has become a key figure in the impeachment inquiry. He then traveled to Kyiv on Wednesday seeking to meet with other former Ukrainian prosecutors whose claims have been embraced by Republicans, including Viktor Shokin and Kostiantyn H. Kulyk, according to people familiar with the effort.

The former prosecutors, who have faced allegations of corruption, all played some role in promoting claims about former Vice President Joseph R. Biden Jr., a former United States ambassador to Ukraine and Ukrainians who disseminated damaging information about Mr. Trump’s campaign chairman, Paul Manafort, in 2016.

Those claims — some baseless and others with key disputed elements — have been the foundations of the effort by Mr. Trump and Mr. Giuliani to pressure the Ukrainian government to commit itself to investigations that would benefit Mr. Trump heading into his re-election campaign. That effort in turn has led to the impeachment proceedings in the House against the president.

Mr. Giuliani is using the trip, which has not been previously reported, to help prepare more episodes of a documentary series for a conservative television outlet promoting his pro-Trump, anti-impeachment narrative. His latest moves to advance the theories propounded by the prosecutors amount to an audacious effort to give the president’s supporters new material to undercut the House impeachment proceedings and an eventual Senate trial.

It was Mr. Giuliani’s earlier interactions with some of the same Ukrainian characters that set the stage for the impeachment inquiry in the first place, and also led to an investigation by federal prosecutors into whether Mr. Giuliani violated federal lobbying laws.

Mr. Giuliani’s trip has generated concern in some quarters of the State Department, coming amid scrutiny of his work with American diplomats earlier this year on the pressure campaign. His trip to Budapest and Kyiv suggests that he is unbowed by the intense scrutiny that has enveloped him and his associates, including revelations from the House Intelligence Committee on Tuesday of frequent calls from Mr. Giuliani to the White House and other figures in the pressure campaign at key moments this year.

The European trip was organized around the filming of a multipart television series featuring Mr. Giuliani that is being produced and aired by a conservative cable channel, One America News, or OAN.

The series, the first two installments of which have already aired, is being promoted as a Republican alternative to the impeachment hearings, including Ukrainian “witnesses” whom House Democrats running the inquiry declined to call. Some of the Ukrainians interviewed by Mr. Giuliani were sworn in on camera to “testify under oath” in a manner that the network claims “debunks the impeachment hoax.”

Mr. Giuliani was joined in Budapest by an OAN crew, including the reporter hosting the series, Chanel Rion, who conducted an interview in the Hungarian capital with Mr. Lutsenko, according to someone familiar with the interview.

Earlier this year, Mr. Lutsenko played a formative role in what became Mr. Trump’s pressure campaign, meeting with Mr. Giuliani in New York, where he made claims about a gas company that paid Mr. Biden’s son as a board member and the dissemination of a secret ledger listing slush payments from a Russia-aligned Ukrainian political party earmarked to Mr. Manafort and others. When The New York Times revealed the payments earmarked to Mr. Manafort in August 2016, it forced him to resign under pressure from the Trump campaign.

Mr. Lutsenko, whom Mr. Giuliani considered representing as a client, is facing allegations in Ukraine of abuse of power during his years as a prosecutor and was characterized by some American officials in the impeachment inquiry as untrustworthy. But his office moved to pursue investigations sought by Mr. Trump, and he was praised by the president as a “very good prosecutor” during a July 25 phone call with President Volodymyr Zelensky of Ukraine.

Mr. Lutsenko discussed some of the subjects into which Mr. Trump sought investigations during his interview on Tuesday with Ms. Rion, said the person familiar with the interview.

Also joining Mr. Giuliani and the OAN crew in Budapest were two former Ukrainian officials who have been supportive of Mr. Trump, Andrii Telizhenko and Andrii V. Artemenko.

The pair, along with a third former Ukrainian official, Mykhaylo Okhendovsky, recorded interviews at OAN’s studios in Washington late last month with Ms. Rion and Mr. Giuliani for an episode of the series that aired on Tuesday night.

The three Ukrainians questioned the Democrats’ case for impeachment during the episode. And they asserted that Mr. Trump had ample reason to ask Mr. Zelensky during their July 25 phone call to investigate the Bidens and whether Ukrainians acted improperly to damage Mr. Trump’s 2016 campaign.

In the OAN episode broadcast on Tuesday, Mr. Telizhenko reiterated his claims that, while working in the Ukrainian Embassy in Washington in 2016, he was instructed to help a Democratic operative gather incriminating information about Mr. Manafort. The Ukrainian Embassy has denied his account.

Mr. Artemenko, a former member of Parliament, and Mr. Okhendovsky, the former chairman of Ukraine’s Central Election Commission, both called into question the authenticity of the ledger listing payments to Mr. Manafort.

Ms. Rion falsely claimed on air that the Democratic operative connected to the Ukrainian Embassy, who has become a frequent target of House Republicans, provided the ledger to The Times. She declared that her interviews with Mr. Telizhenko, Mr. Artemenko and Mr. Okhendovsky “pulls the rug out from under” Democrats’ “central premise that Trump was wrong to ask about Joe Biden and the Democrat party’s starring role in Ukrainian corruption.”

Ms. Rion, Mr. Telizhenko, Mr. Artemenko and the White House did not respond to requests for comment.

Mr. Giuliani rejected any notion that it was audacious or risky for him to continue pursuing the Ukrainian mission, given the scrutiny of him by impeachment investigators and federal prosecutors in the Southern District of New York, or S.D.N.Y.

“If S.D.N.Y. leaks and Democrats’ threats stopped me, then I should find a new profession,” he wrote in a text message on Wednesday.

Asked about his interview with Mr. Lutsenko and efforts to interview other Ukrainian prosecutors, he responded that “like a good lawyer, I am gathering evidence to defend my client against the false charges being leveled against him” by the news media and Democrats.

He accused Representative Adam B. Schiff, the chairman of the House Intelligence Committee, which conducted impeachment hearings last month, of preventing testimony that could help Mr. Trump. “I am hoping that the evidence concealed by Schiff will be available to the public as they evaluate his outrageous, unconstitutional behavior.”

He did not respond to a question about whether he briefed Mr. Trump on his trip or his involvement in the OAN series, but he has said that he keeps Mr. Trump apprised of his efforts related to Ukraine.

In a news release Tuesday, OAN indicated that the third installment of its series with Mr. Giuliani was “currently in the works with OAN investigative staff outside the United States conducting key interviews at undisclosed safe houses.” It said the network would release additional details “upon return of OAN staff to U.S. soil.”

In Budapest, Mr. Giuliani had dinner on Tuesday night at the residence of the United States ambassador to Hungary, David B. Cornstein, a longtime friend and associate of both Mr. Trump and Mr. Giuliani.

A spokesman for the American Embassy in Budapest issued a statement describing the Tuesday night get-together as “a private dinner” hosted by the ambassador “with his longtime friend,” Mr. Giuliani, and Mr. Giuliani’s assistant. “No one else was present at the dinner.”

A reporter who showed up outside the ambassador’s residence during the dinner was turned away by a security guard.

Some State Department officials said they were tracking Mr. Giuliani’s continued efforts to engage the Ukrainians with concern. One department official, speaking on the condition of anonymity to discuss a politically sensitive topic, called it “shocking” that, in the face of scrutiny of his prior efforts related to Ukraine, Mr. Giuliani was traveling internationally in continued pursuit of information from Ukrainians.

One of the former prosecutors with whom Mr. Giuliani is seeking to meet in Kyiv is Mr. Shokin, who claims his ouster was forced by Mr. Biden to prevent investigations into the gas company paying Mr. Biden’s son Hunter Biden. Allies of the oligarch who owns the gas company say they welcomed Mr. Shokin’s firing, but not because he was actively investigating the company or the oligarch. Rather, they say, he was using the threat of prosecution to try to solicit bribes.

Another prosecutor with whom Mr. Giuliani was seeking to meet, Mr. Kulyk, had compiled a seven-page dossier in English accusing Hunter Biden of corruption, and had taken steps to pursue an investigation into Burisma Holdings, the gas company on whose board Hunter Biden served. Mr. Kulyk was fired recently by Mr. Zelensky’s new top prosecutor as part of an anti-corruption initiative.

OAN’s crew hopes to interview the former prosecutors as well, Ms. Rion suggested during the first episode of the series, which aired late last month.