On the highest floor of the tallest building in Boston, Senator Elizabeth Warren was busy collecting big checks from some of the city’s politically connected insiders. It was April 2018 and Ms. Warren, up for re-election, was at a breakfast fund-raiser hosted for her by John M. Connors Jr., one of the old-guard power brokers of Massachusetts.

Soon after, Ms. Warren was in Manhattan doing the same. There would be trips to Hollywood and Silicon Valley, Martha’s Vineyard and Philadelphia — all with fund-raisers on the agenda. She collected campaign funds at the private home of at least one California megadonor, and was hosted by another in Florida. She held finance events until two weeks before her all-but-assured re-election last November.

Then, early this year, Ms. Warren made a bold bet that would delight the left: She announced she was quitting this big-money circuit in the 2020 presidential primary, vowing not to attend private fund-raisers or dial up rich donors anymore. Admirers and activists praised her stand — but few noted the fact that she had built a financial cushion by pocketing big checks the years before.

The open secret of Ms. Warren’s campaign is that her big-money fund-raising through 2018 helped lay the foundation for her anti-big-money run for the presidency. Last winter and spring, she transferred $10.4 million in leftover funds from her 2018 Senate campaign to underwrite her 2020 run, a portion of which was raised from the same donor class she is now running against. 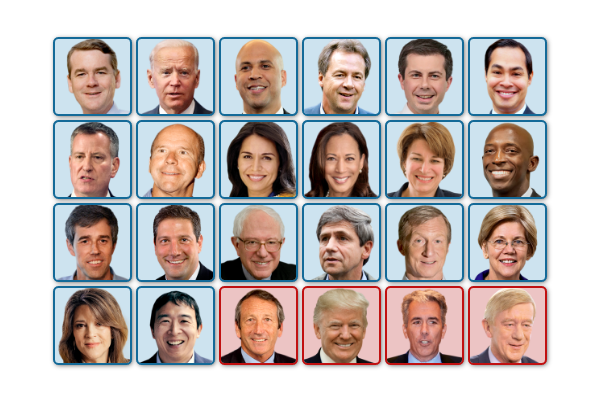 As Ms. Warren has risen in the polls on her populist and anti-corruption message, some donors and, privately, opponents are chafing at her campaign’s purity claims of being “100 percent grass-roots funded.” Several donors now hosting events for her rivals organized fund-raisers for her last year.

Mr. Rendell said he had recruited donors to attend an intimate fund-raising dinner for Ms. Warren last year at Barclay Prime, a Philadelphia steakhouse where the famed cheesesteak goes for $120. (The dish includes Wagyu rib-eye, foie gras, truffled cheese whiz and a half-bottle of champagne.) He said he received a “glowing thank-you letter” from Ms. Warren afterward. 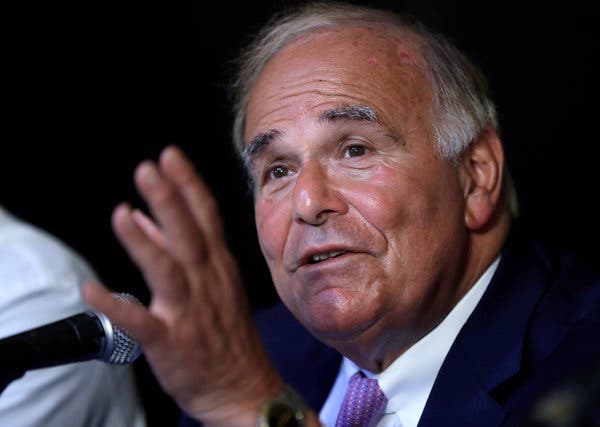 But when Mr. Rendell co-hosted Mr. Biden’s first fund-raiser this spring, Ms. Warren’s campaign sent brickbats, deriding the affair as “a swanky private fund-raiser for wealthy donors,” the likes of which she now shuns.

“She didn’t have any trouble taking our money the year before,” Mr. Rendell said. “All of a sudden, we were bad guys and power brokers and influence-peddlers. In 2018, we were wonderful.”

Supporters of Ms. Warren say her presidential campaign should not be criticized for trying to lessen the influence of big donors now, even if she wooed and benefited from them previously.

“There’s a perverse incentive system for public officials,” said Adam Green, co-founder of the Progressive Change Campaign Committee, which has endorsed Ms. Warren. If candidates continue the big-money status quo, he said, “you don’t get called a hypocrite. But if you stick your neck out, take chances, challenge power, and try to change the system step by step, you get criticized for not taking every step possible all at once.”

Ms. Warren’s surplus Senate cash has undergirded two important elements of her 2020 run. She was able to invest early in a massive political organization — spending 87 cents of every dollar she raised in early 2019 — without fear of bankrupting her bid, and she had that financial backstop to lessen the risk of forgoing traditional fund-raisers.

“It gave her some running room,” said Mary Anne Marsh, a Democratic strategist based in Massachusetts, though she still called banning fund-raisers a “big risk.”

Advisers to Ms. Warren defended her campaign finance decisions and noted that big-money fund-raisers, like the ones with Mr. Connors and Mr. Rendell, accounted for only about one-quarter of the $25.8 million she raised in 2017 and 2018.

Kristen Orthman, Ms. Warren’s communications director, said the senator “believes that to take back the White House we need to build a grass-roots movement.”

“When we made the decision to run the campaign this way, the players in the usual money-for-influence game dismissed it as naïve and said it would never work and it would kill the campaign,” Ms. Orthman said. “We’re pleased that our grass-roots strategy has been so effective that they’re now threatened enough to be attacking us for it.”

Since Ms. Warren’s announcement in February, her disavowal of closed-door events with the donor class has become an inextricable part of the DNA of her candidacy as she promises to bring about structural change to American society.

It is the reason, her campaign advisers say, that she has the time to dedicate to hourslong selfie lines, to expand the map of states she can visit, and to call up small donors at random to thank them for giving, rather than pleading for more $2,800 donations from the well-to-do.

That message — paired with a raft of ambitious policy proposals — resonated with enough small contributors to propel Ms. Warren to raise $19.2 million in the second quarter of 2019 (the third most in the field) and to the top tier in the polls.

The only other Democratic candidate to bypass big-money events is her fellow liberal in the race, Senator Bernie Sanders. He has transferred $10.1 million from old accounts to his 2020 campaign, but, unlike Ms. Warren, he had eschewed high-dollar fund-raisers in past races. (Other senators transferred money into their 2020 bids as well.)

There is no way to say exactly how much of the $10.4 million Ms. Warren transferred from 2018 was attributable to large donations. Her campaign said she had 380,000 donors to her re-election who gave an average of $30 — a strong grass-roots following. Records show about $6 million of her Senate funds also came from donors who gave $1,000 or more.

Throughout 2017 and 2018, Ms. Warren paired appeals to small contributors with a robust operation courting big ones.

In early 2017, Ms. Warren had created the Elizabeth Warren Action Fund, which could raise money above the $5,400 candidate limit. The extra funds went to her political action committee, which she would then redistribute to other party committees and politicians, and the Massachusetts Democratic Party; she closed the joint account in late 2018.

Ms. Warren also traveled the country extensively to fund-raise, according to invitations obtained by The New York Times and people familiar with the events, though she often found a chillier reception in New York because of her anti-Wall Street rhetoric.

In Florida, she was hosted for an event by the billionaires Henry and Marsha Laufer. In New York, Meyer S. Frucher, the vice chairman of Nasdaq, held a reception for her. She was hosted by the “Lost” creator Damon Lindelof and his wife, Heidi, in Southern California. The philanthropist Stephen M. Silberstein had Ms. Warren over to his San Francisco-area home. And as late as the fall of 2018, she visited Silicon Valley, where Karla Jurvetson, a multimillion-dollar Democratic contributor, hosted an event for her.

This year, Ms. Jurvetson also donated money to the Democratic National Committee on Ms. Warren’s behalf, as first reported by BuzzFeed, to help her campaign purchase information about voters (she was not solicited directly by Ms. Warren).,. Ms. Jurvetson declined to comment through a spokesman.

Mr. Silberstein said he had bristled when he first heard Ms. Warren would stop doing events like the dinner he had held for her. “My first reaction was I was insulted,” he said in an interview, but then came to see it as a “gutsy move.”

“After I sort of got over the fact that she wouldn’t be calling me anymore, I saw that she made a big success out of it,” he said.

As the 2018 election neared, Ms. Warren’s big money was partly bankrolling an apparent 2020 apparatus in waiting. Ms. Warren said in late September last year that she would “take a hard look” at a White House run. Her Senate campaign notably aired zero television ads (as did Senator Kirsten Gillibrand of New York, ahead of her run). Some of the money that Ms. Warren did not stockpile went to strategic giveaways and investments, such as deploying staff in the early nominating states of Iowa and New Hampshire in 2018.

Ms. Warren continued to press for donations into October. Her campaign invited donors to attend a Senate debate watch event, with the added draw that Ms. Warren would visit after she got offstage. Her last fund-raising event, an intimate round table in Cambridge, came on Oct. 27.

Sean Curran, who contributed $5,400 to Ms. Warren’s Senate campaign but co-hosted an event for Senator Kamala Harris of California this year, said the move by Ms. Warren to forgo private fund-raisers now was “consistent with her values.”

“If any other candidate did this, I’d say they were looking for the cheap political advantage,” Mr. Curran said.

The choice to swear off fund-raisers was certainly seen as fraught when she made it. Her finance director and another top fund-raising official quickly resigned. And in late March, she had to dip briefly into those Senate reserves, as her fund-raising briefly did not keep up with her spending. But the decision has proved a central selling point for Ms. Warren, who by the end of June had nearly $20 million in the bank and will stand at center stage with Mr. Biden at Thursday’s debate.

Ms. Warren campaigning at a house party in Hampton Falls, N.H., in September.CreditElizabeth Frantz for The New York Times

Steven Grossman, a Boston-area donor and former chairman of the Democratic National Committee, who contributed the maximum amount to Ms. Warren’s 2018 campaign, said the biggest advantage of Ms. Warren’s carry-over cash was the ability for her to invest in staff early on.

“Everyone else was playing catch-up ball,” Mr. Grossman said. He is now a supporter of Mayor Pete Buttigieg of South Bend, Ind.

Mr. Green, the Warren supporter, said her vow to skip fund-raisers had led to small donations.

“When we point out to our grass-roots that Elizabeth Warren needs you more because she’s forgoing big-money fund-raising, that definitely is a more compelling pitch that results in more people taking out their credit card,” he said.

Ms. Warren has said her ban on fund-raisers only applies to the primary. Should she win the nomination, she would return to the events to compete with Republicans. (Faiz Shakir, campaign manager to Mr. Sanders, said the senator would not hold such fund-raisers if he is the nominee.)

So how much did the Senate money help Ms. Warren get a jump on her presidential rivals?

Here’s one way to look at it: As of the end of June, only five candidates besides Ms. Warren, out of two dozen Democratic hopefuls, had even raised more than $10.4 million, the amount of her Senate transfer.

“Certainly it’s a lot easier if you have $12 million as a starting point,” Andrew Yang, the businessman and first-time candidate, said with a laugh. “If she hadn’t, then it might have been a slightly different calculation.”

Mr. Yang went on: “But you can’t begrudge something that someone has done at an earlier point if they decide to move in a direction that I personally think is very positive.” 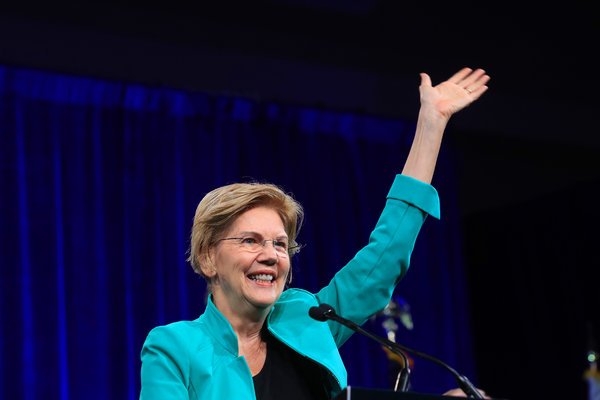 The 5 Days That Defined the 2020 Primary 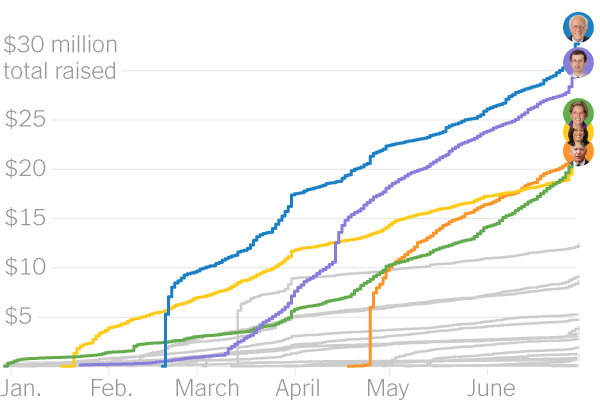 Many Democrats Love Elizabeth Warren. They Also Worry About Her. 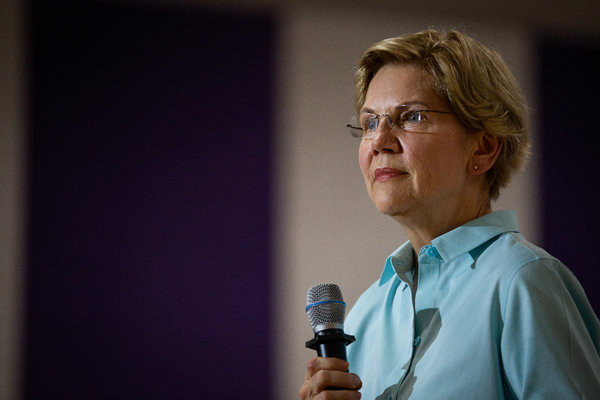