How Iran’s President Left Trump Hanging, and Macron in the Hall

The telephone line had been secretly set up. President Trump waited on the other end. All President Hassan Rouhani of Iran had to do was come out of his hotel suite and walk into a secure room where Mr. Trump’s voice would be piped in via speaker.

Mr. Rouhani and his aides were blindsided by the offer, presented to them by President Emmanuel Macron of France on an unannounced visit last Tuesday night to their quarters at the Millenium Hilton Hotel near the United Nations, where world leaders had converged for the annual General Assembly.

It was a mission lifted out of a Hollywood thriller. Mr. Macron has sought for months to broker a thaw in the standoff between the United States and Iran, which has threatened to escalate into a new Middle East war.

Accompanied by a small team of advisers, Mr. Macron awaited an answer outside the Iranian leader’s suite, according to three people with knowledge of the diplomatic gambit, which was first reported on Monday by The New Yorker. Messages were passed between them via Mr. Rouhani’s aides.

In the end, Mr. Rouhani refused even to come out of his room. Mr. Macron left empty-handed and Mr. Trump was left hanging.

With no guarantee that Mr. Trump would end the onerous sanctions he has imposed on Iran, Mr. Rouhani feared he would be trapped in an encounter that Mr. Trump could exploit as a headline-grabbing success, the people with knowledge of the episode said.

It also was clear that Mr. Rouhani might suffer a political backlash at home, where hard-liners were already fuming at the mere possibility that Mr. Rouhani would consider a dialogue with Mr. Trump.

For the Iranians, however, the incident underscored what they see as Mr. Trump’s eagerness, bordering on desperation, to connect directly to Iran’s leaders and defuse the spiraling hostility. For them, it was a validation that their strategy of escalating tensions in response to Mr. Trump’s “maximum pressure” campaign of sanctions was paying off.

“For Rouhani, talking to Trump is a liability,” said Ali Vaez, director of the Iran program at the International Crisis Group, a research organization on conflict resolution. Mr. Rouhani would not take such a risk, Mr. Vaez said, unless “he knew a reward would come out of it.”

Mr. Trump’s desire for a meeting or at least a phone call with Mr. Rouhani during the General Assembly reflected what some analysts called the American leader’s broader frustrations over international problems that keep piling up.

Those frustrations have only been compounded by the congressional impeachment inquiry over Mr. Trump’s phone call with Ukraine’s president in July, in which he pushed for an investigation into former Vice President Joseph R. Biden Jr., a leading Democratic challenger in the 2020 presidential election.

“Trump really wants a foreign policy win and can’t find one,” said Cliff Kupchan, chairman of the Eurasia Group, a political-risk consulting firm in Washington. “He thinks talks with Iran now may be his best shot.”

Mr. Kupchan said Mr. Trump “was especially desperate at the U.N.G.A. — he wanted to flip the news cycle from Ukraine and Biden to a dramatic meeting with Rouhani.”

The people who recounted Mr. Macron’s ill-fated visit to Mr. Rouhani’s hotel declined to be identified by name or nationality because they were not authorized to discuss it. The White House did not immediately respond to requests for comment. Officials from the foreign ministries of France and Iran declined to comment.

Mr. Macron’s visit followed Mr. Trump’s speech that day at the General Assembly, in which he repeated his standard denunciations of Iran but signaled the possibility of a reconciliation, reminding the world that some of America’s current friends are former enemies.

But on Wednesday, when it was Mr. Rouhani’s turn to address the General Assembly, he appeared to all but rule out a meeting with Mr. Trump as he castigated the United States for quitting the 2015 nuclear agreement. For Iran, Mr. Rouhani said, photo opportunities must come after, not before, progress has been achieved. He did not hint that Mr. Trump had tried unsuccessfully to talk with him by phone the night before. 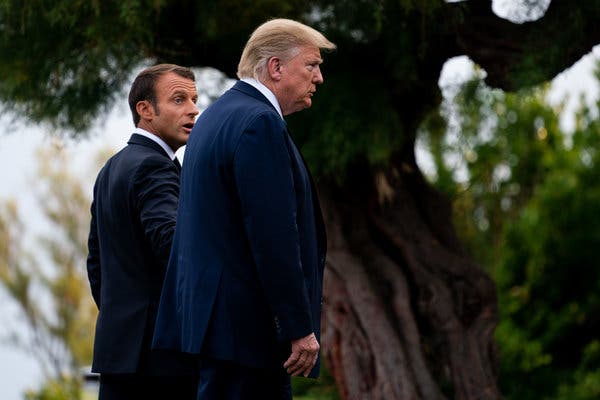 President Trump and his French counterpart, Emmanuel Macron, at the Group of 7 summit in Biarritz, France, in August.CreditErin Schaff/The New York Times

Richard Nephew, the former principal deputy coordinator for sanctions policy at the State Department and now a research scholar at Columbia University’s School of International and Public Affairs, said the Iranians had two reasons for keeping such an episode to themselves.

“They don’t see any upside internationally in them embarrassing Macron by showing the rebuff,” Mr. Nephew said. “They may want this channel in the future, so why undermine it?”

The second reason, he said, was that “Rouhani may be concerned about how his opponents in Tehran would use this regardless of him having said ‘no.’”

For the members of Iran’s hierarchy, which has largely defined itself by hostility to the United States government since the 1979 Islamic revolution, any hint of an easing in estranged relations comes with extraordinary political risk.

At the United Nations General Assembly in particular — the one place where Iranian and American officials could run into each other — Iran’s leaders have gone out of their way to avoid encounters.

In 2000, President Bill Clinton and Iran’s president at the time, Mohammad Khatami, had a near encounter at the General Assembly. Aides on both sides had orchestrated a hallway handshake that was meant to look impromptu, but Mr. Khatami had a change of heart at the last minute and hid in a bathroom until Mr. Clinton and his party had left the hallway, diplomats who knew about the incident have said.

In 2013, in the midst of the Iran nuclear deal negotiations, American and Iranian officials discussed the possibility of President Barack Obama and Mr. Rouhani shaking hands at the General Assembly.

Ultimately the two only shared a phone call — but even that was like a diplomatic thunderbolt, the first time leaders of the two countries had spoken since the Tehran hostage crisis more than three decades earlier. In Iran, hard-liners rebuked Mr. Rouhani for having spoken to Mr. Obama.

Later that year, Mr. Rouhani did not attend the funeral for the South African leader Nelson Mandela, partly over fear of getting cornered into seeing Mr. Obama. The Iranian newspaper Kayhan, a mouthpiece of Tehran’s hard-line faction, warned that the funeral would be a trap, leading to face-to-face contact “with the head of Great Satan’s government.”

Foreign Minister Mohammad Javad Zarif of Iran accidentally ran into Mr. Obama at the sidelines of the General Assembly in 2015 and the two shook hands. But when news of the handshake leaked, Mr. Zarif sought assurances from the White House that a photograph of the handshake, taken by one of Mr. Obama’s staff members, would not be released.

Mr. Macron’s misadventure at the Millennium Hotel was not the first time he had been entangled in awkwardness involving Mr. Trump’s effort to talk with the Iranians.

According to Aftab, a semiofficial Iranian news agency, Mr. Trump made a spontaneous attempt to meet Mr. Zarif in August at the Group of 7 summit in France hosted by Mr. Macron, who had invited Mr. Zarif to discuss a potential meeting with the Americans.

Iran’s condition for accepting the invitation was that there would be no chance encounters with the American delegation, the Aftab account said.

When Mr. Macron told Mr. Trump that he would be meeting Mr. Zarif, Aftab said, Mr. Trump surprisingly insisted that he join Mr. Macron, but the French president said he had promised the Iranians there would be no such contacts.

During his meeting with Mr. Zarif, Aftab said, Mr. Macron joked that he could call Mr. Trump to join them. Mr. Zarif declined.

The persistent efforts of European leaders to broker a meeting between Mr. Trump and Mr. Rouhani has engendered jokes among Iranians.

They say the effort to push the two leaders into a meeting reminds them of a wedding where cousins who are locked in a family dispute encounter each other, and elders push them to kiss and make up without resolving their issues.