Hong Kong police have fired tear gas and rubber bullets to force back anti-government protesters trying to escape a university, in which hundreds of people are holed up with petrol bombs and homemade weapons amid fears of a bloody crackdown.

Dozens of people attempted to flee the Polytechnic University campus on Monday after a night of chaos in the Chinese territory, during which a police officer was shot with a bow and arrow, major routes were blocked and a bridge set on fire.

Protests have been raging in the former British colony for six months – at first in opposition to a highly controversial ﻿extradition bill, which could have seen Hong Kong residents detained in mainland China. 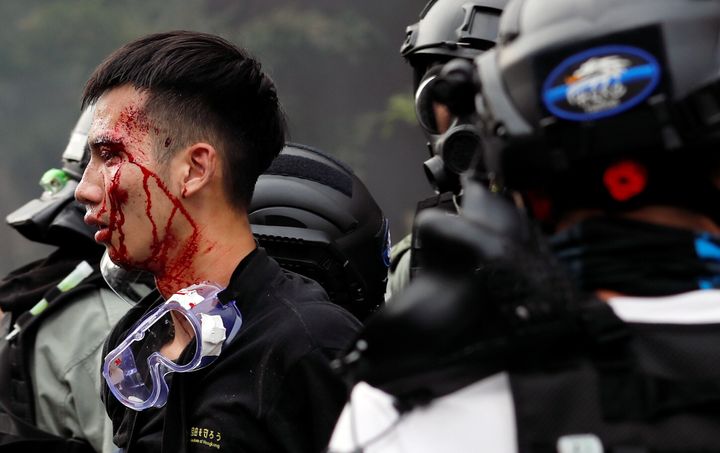 After the initial backlash, the bill was withdrawn, but protests have evolved into broader rebellions against both the police and what is perceived by some as the encroaching influence of Beijing.

Public broadcaster RTHK reported that “many” had been arrested near the campus, while in Nathan Road – the nearby commercial district – activists brought traffic to a halt and forced the closure of shopping centers.

“We’ve been trapped here for too long. We need all Hong Kongers to know we need help,” said Dan, a 19-year-old protester on the campus, as he burst into tears.

“I don’t know how much longer we can go on like this. We may need international help.”

The Hong Kong government involved a colonial-era emergency law in October banning faced masks commonly used by protesters. The High Court ruled on Monday the ban was “incompatible with the Basic Law.”

Remember you have life in your hands. Why do you need to push us to death?

The Basic Law is the mini-constitution setting the terms under which the former colony returned to China.

Following a group who had attempted to make a run for it in the morning, protesters tried again to escape in the afternoon – but were pushed back with volleys of tear gas.

“Remember you have life in your hands. Why do you need to push us to death?” one person shouted at police from a campus rooftop as protesters wearing gas masks and clutching umbrellas looked for ways to escape.

Police urged protesters to “drop their weapons” and leave. 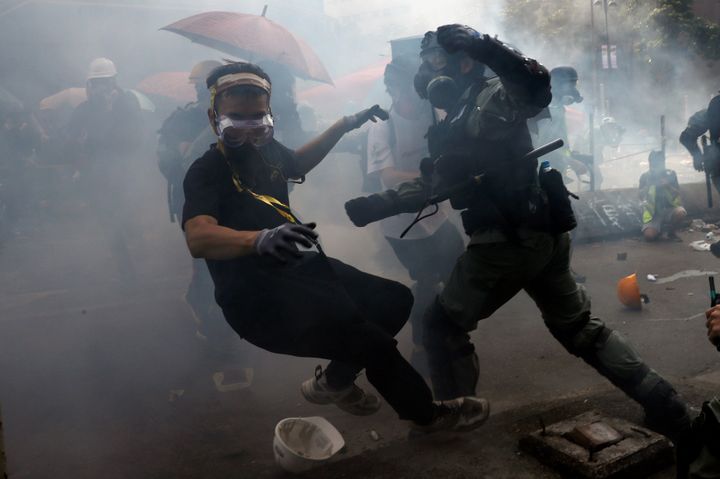 Tyrone Siu / Reuters A protester is detained by riot police while attempting to leave the campus of Hong Kong Polytechnic University (PolyU) during clashes with police in Hong Kong on Nov. 18, 2019.

“Police appeal to everyone inside the Polytechnic University to drop their weapons and dangerous items, remove their gas masks and leave… in an orderly manner,” they said in a statement.

“They should follow police instructions and must not charge at police cordons.”

Live video footage from the scene showed protesters sitting cross-legged in the road with their hands tied behind their backs as riot police watched over them.

Police said they fired three live rounds when “rioters” attacked two officers who were attempting to arrest a woman. No one was wounded and the woman escaped amid a dramatic escalation of the unrest that has plunged the Asian financial hub into chaos for almost six months. 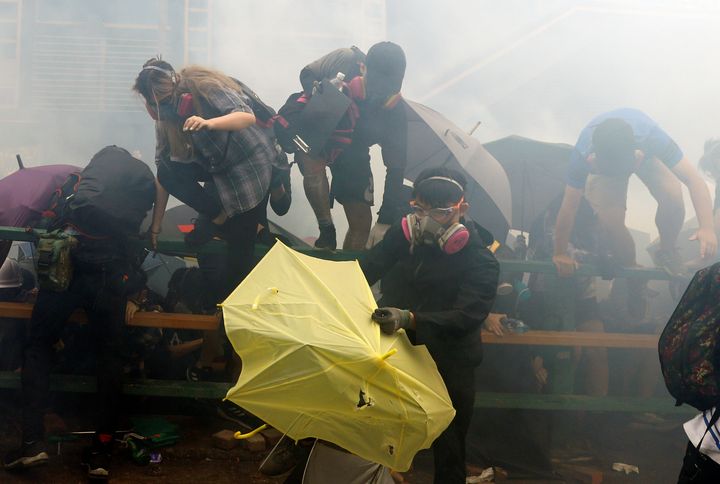 Thomas Peter / Reuters Protesters, some of whom stand behind the umbrellas which have become a symbol of the protest, attempt to escape the campus.

Demonstrators are furious at what they see as Chinese meddling in Hong Kong’s promised freedoms when it returned to Chinese rule in 1997, and claim they are responding to excessive use of force by police.

China says it is committed to the “one country, two systems” formula granting Hong Kong autonomy, with the city’s police denying accusations they use undue violence.

However, the U.S. has condemned the “unjustified use of force” in Hong Kong, and has called on Beijing to protect the territory’s freedoms, a senior official in Donald Trump’s administration said.

Chinese troops in shorts and T-shirts, some carrying red plastic buckets or brooms, emerged from their barracks on Saturday in a rare public appearance to help clean up debris. 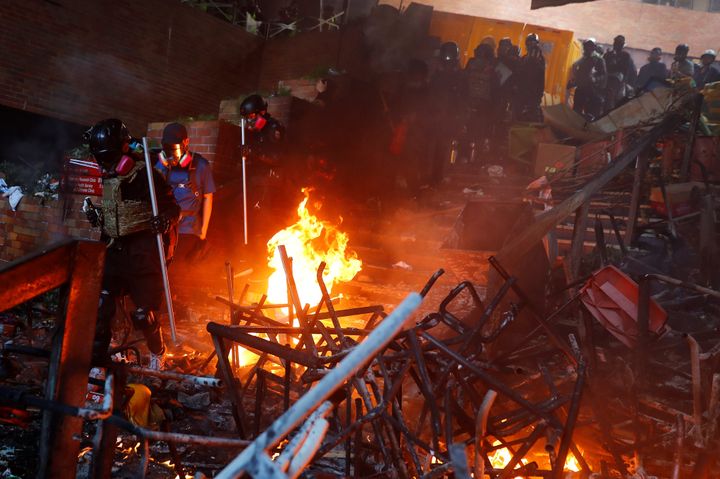 Chinese forces have appeared on Hong Kong’s streets only once since 1997, to help clear up after a typhoon last year.

The city’s Cross-Harbour Tunnel, next to the Polytechnic University, linking Hong Kong island to the Kowloon peninsula, remained closed after protesters torched a bridge above the toll booths on Sunday.

Some train services and many roads across the Kowloon peninsula were closed. All schools were shut.

As police approached the barricaded front gate of the university in the predawn hours, protesters retreated into the campus and started fires at the gate and a footbridge.

We need to fight until the end. If we don’t fight, Hong Kong will be over. Ah Lung, 19

As some protesters discussed attempting to leave, others reinforced the barricades and distributed boxes of petrol bombs around the site.

Thousands of residents and protesters flocked to districts around the university including Tsim Sha Tsui, Jordan and Yau Ma Tei, to try to penetrate the riot-police lines to rescue the trapped students.

“If we can only hold on until dawn, more might come,” said one young activist in the university.

University President Teng Jin-Guang said he had brokered a truce with police to allow protesters to leave the campus peacefully, however it was unclear whether a truce was taking effect.

Some of those trapped on the sprawling red-brick campus close to the city’s harbor said they would never surrender.

The unrest in Hong Kong poses the gravest popular challenge to Chinese President Xi Jinping since he came to power in 2012. Xi has said he is confident Hong Kong’s government can resolve the crisis.

Beijing denies interfering in Hong Kong’s affairs and has blamed Western countries for stirring up unrest.