Extensive flooding and damage were reported along the Gulf Coast on Wednesday after Hurricane Sally roared ashore in Alabama, bringing torrential rain that threatens to spread further inland.

The U.S. National Hurricane Center (NHC) in Miami said as of Wednesday morning, Hurricane Sally is now a Category 1 storm, packing maximum sustained winds of 90 mph, and is located about 25 miles west of Pensacola, Fla., moving northeast at an agonizingly slow 3 mph.

The NHC said that “historic and catastrophic flooding is unfolding,” with up to 35 inches of rain expected in parts of the region.

As the storm churned inland after making landfall as a Category 2 storm near Gulf Shores, Ala., damage reports were coming in from across the area. 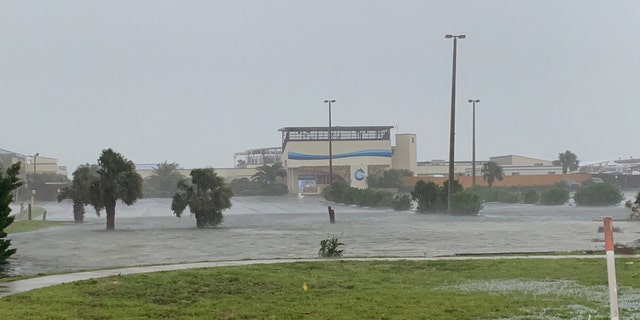 Flooding and damage can be seen on Okaloosa Island in Florida after Hurricane Sally made landfall on Sept. 16, 2020. (Okaloosa Sheriff’s Office)

The Baldwin County Emergency Management Agency in Alabama reported an “extremely dangerous situation,” as major flooding was reported in the area as well as “severe widespread damage.” 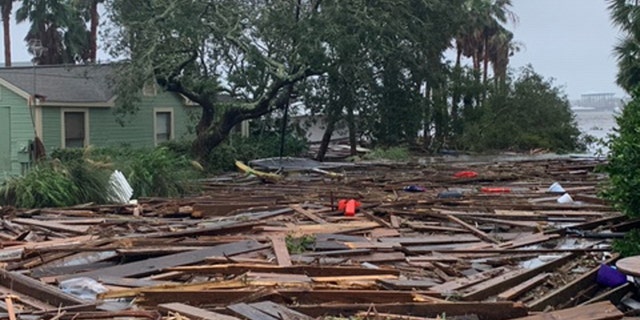 Reports of damage and debris left in the wake of Sally in Baldwin County, Ala. on Sept. 16, 2020. (Baldwin County Emergency Management Agency)

“If you are on high ground above flooded areas, being prepared to stay where you are may be the best protection,” officials stated in an emergency alert.

Officials in Florida’s Panhandle have shut down Interstate 10 at the Escambia Bay Bridge near Pensacola due to sustained high winds on Wednesday morning.

Multiple roads have also been shut down due to flooding in Florida’s Panhandle. 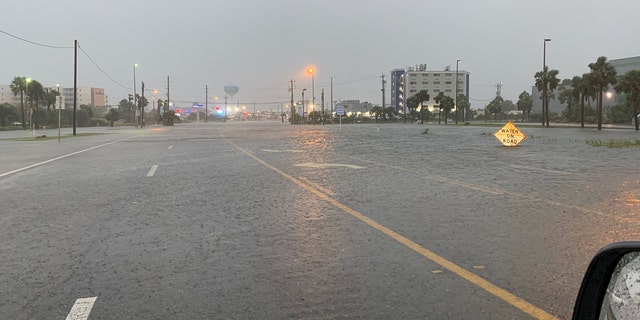 Flooding and damage can be seen on Okaloosa Island in Florida after Hurricane Sally made landfall on Sept. 16, 2020. (Okaloosa Sheriff’s Office)

The National Weather Service (NWS) forecast office in Mobile said that major storm surge flooding was reported in downtown Pensacola with at least 3 to 4 feet of water by 8 a.m. local time, which “continues to worsen.”

“Conditions are NOT improving along the coast this morning,” the NWS tweeted. 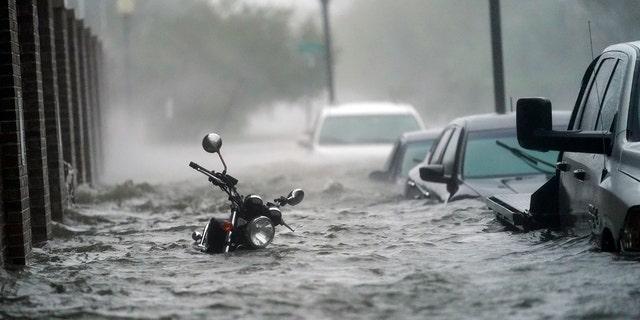 More than 2 feet of rain was recorded near Naval Air Station Pensacola, and the NWS reported nearly 3 feet of water covered streets in downtown Pensacola.

Car alarms in downtown Pensacola were triggered, setting off honking horns and flashing lights that illuminated floodwaters up to the bumpers of parked cars. 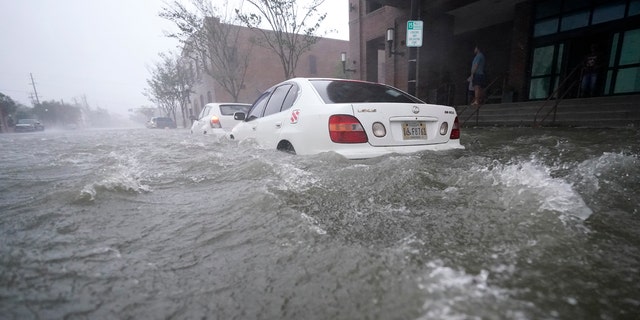 A section of Florida’s Highway 98, which runs parallel to the Gulf of Mexico, was also blocked by debris and downed power lines Wednesday morning.

In a tweet, the Walton County Sheriff’s Office said that residents should stay home because roads in the area “are dangerous right now.”

The agency added that numerous roads in the area are closed due to the storm.

In Alabama, trees throughout the region were downed and cars were struck in floodwaters in Gulf Shores, where the hurricane made landfall.

City officials in Orange Beach, Ala. told the Associated Press they received 120 calls after midnight from people who had homes flooded by the storm. 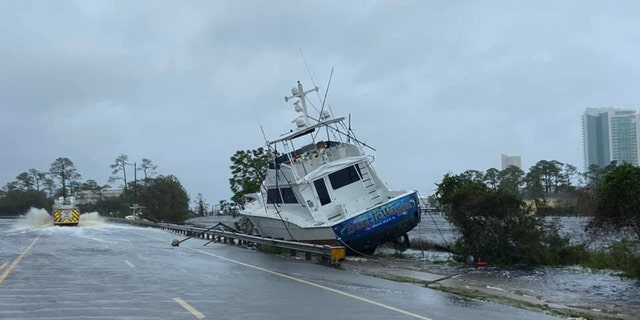 Damage in Orange Beach, Ala. can be seen after Hurricane Sally on Wednesday, Sept. 16, 2020. (City of Orange Beach/Facebook)

Kennon added there are people they haven’t been able to get to because of high water but he said they’re safe in their homes and will be rescued as soon as the water recedes.

“We got a few people that we just haven’t been able to get to because the water is so high,” Kennon told the AP. “But they are safe in their home, as soon as the water recedes, we will rescue them.” 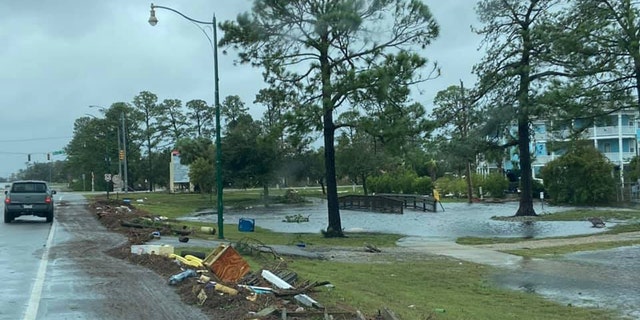 Damage in Orange Beach, Ala. can be seen after Hurricane Sally on Wednesday, Sept. 16, 2020. (City of Orange Beach/Facebook)

A curfew was in effect for the city until noon, with officials asking people to stay off the roads.

“Orange Beach Police/Fire dispatch have been inundated with calls and ask everyone to please be patient. They are doing everything they can to assist,” the city said on Facebook. “They will respond as soon as conditions allow.”

Sally is still a powerful, dangerous and life-threatening storm as it moves inland from the Alabama and Florida coast. 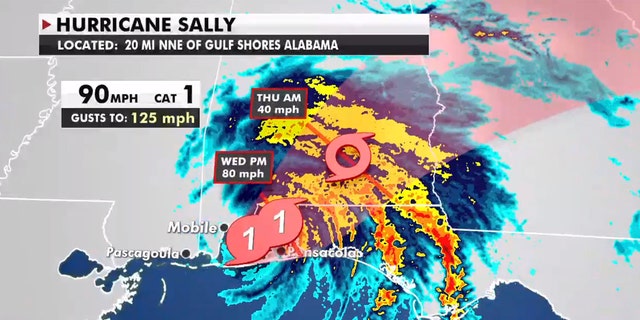 The forecast track of Hurricane Sally as of Wednesday morning. (Fox News)

The slow movement of Sally will bring prolonged, disastrous impacts on this region. 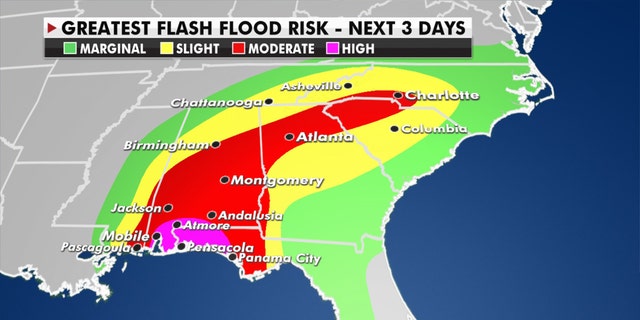 Areas from Gulf Shores in Alabama to Pensacola in Florida have been under a rare flash flood emergency as some areas are already seeing reporting stations recording feet of rain.

BEST WAY TO PREPARE FOR A STORM SURGE

The technical landfall of the storm came early Wednesday morning, but the impact will be long-lived across the area.

Hurricane-force winds, life-threatening storm surge, very heavy rainfall, and a threat for tornadoes will continue through Wednesday for portions of the Central Gulf Coast region.

As the storm crawls inland, significant flash flooding, urban flooding, and some river flooding will move into Alabama and Georgia, even the Western Carolinas over the next few days. 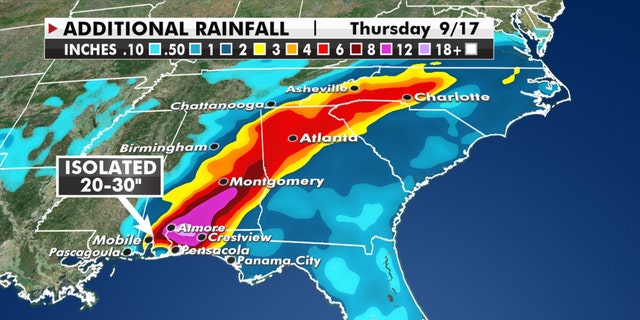 Storm totals range from 10-35 inches of rain along the path of Sally. This will be a historic, catastrophic event for this area. This forecast is a dire one especially for areas that didn’t evacuate in time. 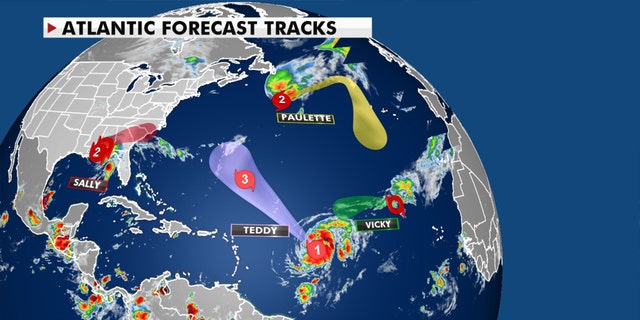 Teddy has strengthened into a hurricane and will threaten Bermuda later this weekend.

Fox News’ David Aaro and the Associated Press contributed to this report.