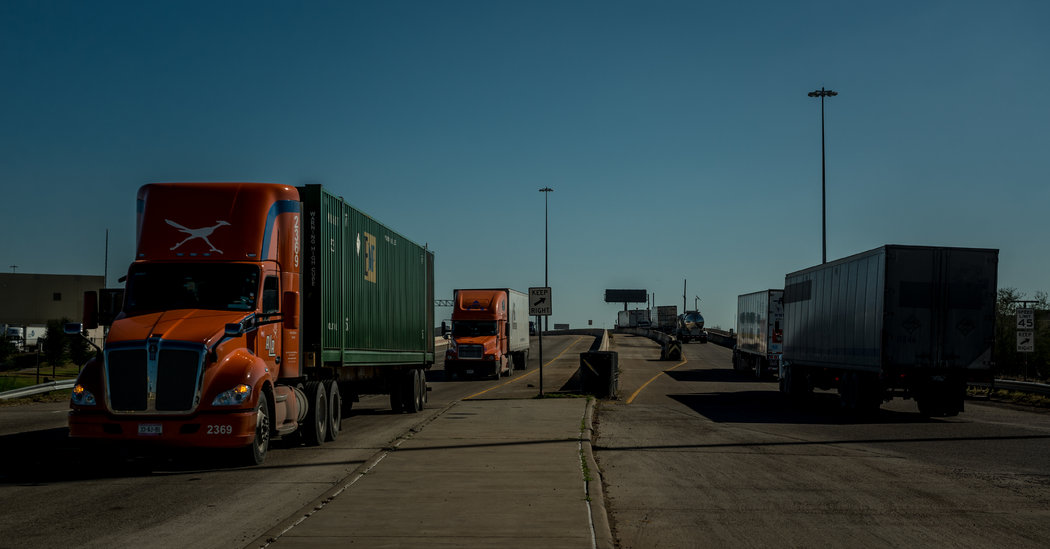 WASHINGTON — The escalating impeachment drama between Congress and the White House that has all but doomed hopes of most legislative progress this fall has instead enhanced the prospects for approval, within weeks, of one major initiative: a sweeping new trade agreement among the United States, Canada and Mexico.

Top lawmakers in both parties and others closely following the talks said that substantial progress had been made in resolving the sticking points, and that a decisive House vote on the accord to replace the North American Free Trade Agreement could occur before Congress departed for Thanksgiving.

The deal may be a rare bright spot in an otherwise dysfunctional dynamic that has taken hold in the capital, and it owes its progress to a coincidence of timing, productive negotiations that have unfolded behind closed doors for months and political necessity for two parties that each has distinct reasons to hope it succeeds.

“We are on a path to yes,” Speaker Nancy Pelosi told reporters last week in one of the strongest signals yet that she would put the full weight of her leadership behind passage of the agreement, the United States-Mexico-Canada Agreement.

Both parties have strong political incentives to approve the trade deal despite deep Democratic skepticism over such pacts after American jobs flowed into Mexico after the ratification of NAFTA in 1993.

For President Trump and Republicans, the agreement is a major priority that could bolster American businesses and help struggling farmers, while showing voters that they have been good stewards of the economy. For Democrats, the accord is a way to give lawmakers from swing districts a broadly popular achievement to show constituents, and a way to counter criticism that they have accomplished little during their time in Washington, which has more often consisted of passing legislation that dies in the Republican-controlled Senate.

That has become even more important now that House Democrats are engaged in an impeachment inquiry that could lead to the president’s ouster. Democrats who represent Republican-leaning districts are facing a potential backlash from Republican and independent voters angry over the Democrats’ emphasis on impeachment, and they are looking for ways to show that they can still produce policies that benefit Americans.

“We are going to demonstrate that simultaneously you can govern,” said Representative Richard E. Neal, the Massachusetts Democrat who leads the Ways and Means Committee. Mr. Neal is leading a delegation to Mexico for a meeting on Tuesday with President Andrés Manuel López Obrador to seek final assurances over aspects of the trade agreement.

Top Democrats also see the agreement as a vehicle to achieve some major progressive goals that would otherwise be impossible to extract from a Republican administration. Republicans are considering potential sweeteners for Democrats, including a plan to shore up pensions that has been sought by Mr. Neal and labor unions.

House Democrats and Robert Lighthizer, the United States trade representative, have been exchanging proposals and counterproposals for weeks, trying to satisfy demands for labor and environmental guarantees. Both sides say the confidential talks have produced results that are leading to increasing confidence that Ms. Pelosi will put the measure on the floor relatively soon.

“It has been a patient give-and-go, and I think we have moved the ball toward the goal,” Mr. Neal said.

Even Democrats skeptical of a trade deal based on their previous experience said the talks with Mr. Lighthizer, who has built credibility with the lawmakers, had been substantive and helpful.

“We have been having conversations for I think over a year, and the Democrats made very serious, thoughtful proposals around issues that we have been consistent on over the years,” said Representative Rosa DeLauro of Connecticut, a member of a working group appointed by the speaker to work out Democratic concerns over the agreement.

But Ms. DeLauro, who opposed NAFTA and was an early critic of the failed Trans-Pacific Partnership agreement, was not quite ready to sign off.

“We are making headway,” she said. “Our view is that when it is right, we will go. We are not there yet.”

There are substantial issues that could still hold up a final agreement. It is not clear, for instance, how negotiators plan to address Democrats’ objections to a provision that would extend protections to pharmaceutical companies for new products. Democrats argue that such measures could hamper future efforts to enact legislation to lower the cost of prescription drugs.

Democrats say that their main fear is that Mexico will not enforce the provisions of the trade deal in areas such as minimum wage requirements and environmental standards, and that the United States will not be allowed to make inspections to determine whether the agreement is being followed. They were alarmed by news reports of labor department budget cuts in Mexico, a fear the Mexican government has raced to alleviate.

Republicans lobbying for the agreement argue that supporting it should be an easy choice for Democrats who have long criticized NAFTA, since the new version amounts to an update with several far more progressive elements than the existing agreement, such as new minimum pay levels.

Senator Rob Portman, Republican of Ohio and a chief trade negotiator for President George W. Bush, is a leading proponent of the agreement and has been trying to sell Democrats on its merits.

“If you vote no on this, that means you are saying, ‘Let’s go with NAFTA,’ and politically for most Democrats, NAFTA is a four-letter word,” Mr. Portman said in an interview. “I just think logic prevails in the end.”

More than that, some Democrats believe the trade agreement is their best prospect for achieving some bipartisan success in such a highly polarized environment.

Ms. Fletcher, who represents the Houston area, noted in an interview the number of trade relationships between her district and both countries in the new trade agreement, and said sealing the deal would show that the gridlocked Congress could achieve some consensus.

“People really want to know about how we’re working together and where there’s bipartisan agreement,” she added. “They want to know that we’re trying to solve real problems.”

Representative Abigail Spanberger, Democrat of Virginia, said the trade deal was a rare consequential measure that could pass the House without falling victim to Republican resistance in the other chamber or in the White House.

“The notable thing about U.S.M.C.A. is that it’s also a priority for the Senate and for the president,” Ms. Spanberger said of the new trade deal. “That hasn’t been the case for some of our most impactful legislation.”

To move the agreement forward, Democrats will need to conclude that it is beneficial enough to them that they are willing to share credit with Mr. Trump over an accomplishment that he will undoubtedly herald in his re-election campaign. Ms. Pelosi, who voted for NAFTA in the House, has told colleagues that she wants to get the new trade agreement approved, and has made clear that she hopes Democrats can separate the impeachment fight and the trade deal.

“They have nothing to do with each other,” Ms. Pelosi said. She added that if the president did not work with Democrats because they questioned his conduct, “then the ball is in his court.”

Despite the priority the Trump administration and congressional Republicans have put on the trade agreement, some concern has arisen in recent days that Mr. Trump, furious over the impeachment showdown, would pull back on the agreement and try to blame Democrats for its collapse, saying they could not get it done because of a single-minded focus on impeachment.

“The Do Nothing Democrats don’t have time to get it done!” Mr. Trump tweeted Thursday about the trade deal.

Ultimately, backers of the agreement believe, the White House will embrace congressional approval of the long-sought agreement as a major victory for the president.

“We are pretty bullish,” said Neil Bradley, executive vice president at the U.S. Chamber of Commerce. “The speaker is saying all the right things, and they are actually making progress in the negotiations.”

“At the end of the day,” he said, “you want to show that impeachment is not the only thing you are focused on.”