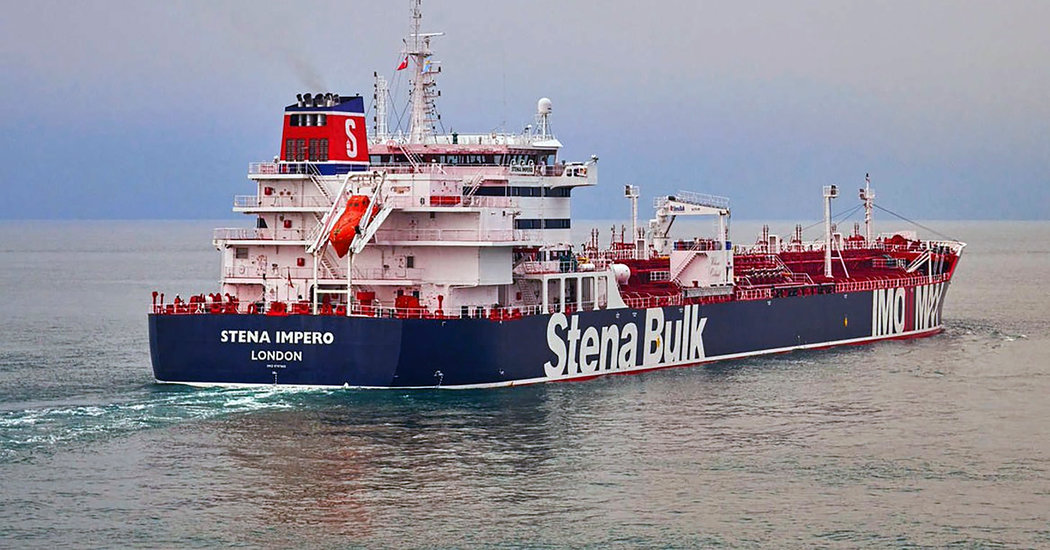 LONDON — Iran seized two ships in the Persian Gulf, the British government said Friday, in the latest episode in three months of escalating tensions between Iran and the West.

Britain’s foreign secretary, Jeremy Hunt, said that the Iranian authorities had seized “a British-flagged vessel and a Liberian-flagged vessel” in the Strait of Hormuz. He added that he was “extremely concerned” and that British officials were working “to swiftly secure the release of the two vessels.”

Earlier Friday, Iran said it had seized a British oil tanker, the Stena Impero, in the Strait of Hormuz, and the ship’s owner said it had lost contact with the vessel as it appeared to be heading toward Iran.

“These seizures are unacceptable,” Mr. Hunt said. “It is essential that freedom of navigation is maintained and that all ships can move safely and freely in the region.”

Mr. Hunt said the ships’ crews included “a range of nationalities, but we understand there are no British citizens on board either ship.” He said the British ambassador to Iran had been in communication with the Iranian Foreign Ministry.

The seizure came a day after the United States said it had downed an Iranian drone in the area, which the Iranians denied, and after weeks of dispute between Britain and Iran over Britain’s seizure of an Iranian tanker near Gibraltar. Iran had vowed to retaliate.

Iran’s Fars News Agency said the Stena Impero had been impounded because it was “violating maritime rules and regulations.”

The ship’s owners issued a statement that the Stena Impero had been “approached by unidentified small crafts and a helicopter during transit of the Strait of Hormuz while the vessel was in international waters.”

“We are presently unable to contact the vessel which is now heading north toward Iran,” the owners, Stena Bulk, and the ship’s managers, Northern Marine, said in the statement.

The British Defense Ministry said it was urgently looking into what had happened to the Stena Impero, a 30,000-ton British-flagged ship, which was heading for Saudi Arabia when it abruptly left the international sea lanes through the Strait of Hormuz.

Earlier Friday, Iranian officials denied that the American military had downed an Iranian drone in the Strait of Hormuz, a day after President Trump and Pentagon officials first made that announcement.

A spokesman for the Iranian Armed Forces said that the “unfounded claim” had been intended to increase tensions in the Persian Gulf, according to Tasnim, an official Iranian news agency.

The Strait of Hormuz has been the focal point of increasing tensions between Iran and the United States in recent months, after a series of incidents in the waterway, a narrow stretch through which a fifth of the world’s supply of oil flows.

Six tankers were damaged in May and June in the Gulf of Oman. The United States described the incidents as attacks by Iran, though Tehran denied any role.

On Thursday, Iranian media reported that the Islamic Revolutionary Guards Corps had detained a foreign oil tanker in the Strait of Hormuz. The Revolutionary Guards said the vessel had been smuggling fuel, just days after a United Arab Emirates vessel with the same name disappeared in the Persian Gulf.

Relations between Iran and the United States have been deteriorating since last year, when Mr. Trump pulled the United States out of the landmark 2015 nuclear accord and began imposing a series of punishing economic sanctions on Tehran.

The 2015 agreement had limited Iran’s nuclear development in exchange for economic relief. With the new sanctions battering Iran’s economy, Tehran set deadlines for the European signers of the deal to come up with a strategy to ease their impact.

Since early July, Iran has begun slowly reducing its compliance with the accord.