Copyright 2015 Libero Themes.
All Rights Reserved.
Westlake Legal Group > impeachment  > It Was a Great Day for Trump, Except for That ‘Scam’
0 Comments
Share

It Was a Great Day for Trump, Except for That ‘Scam’ 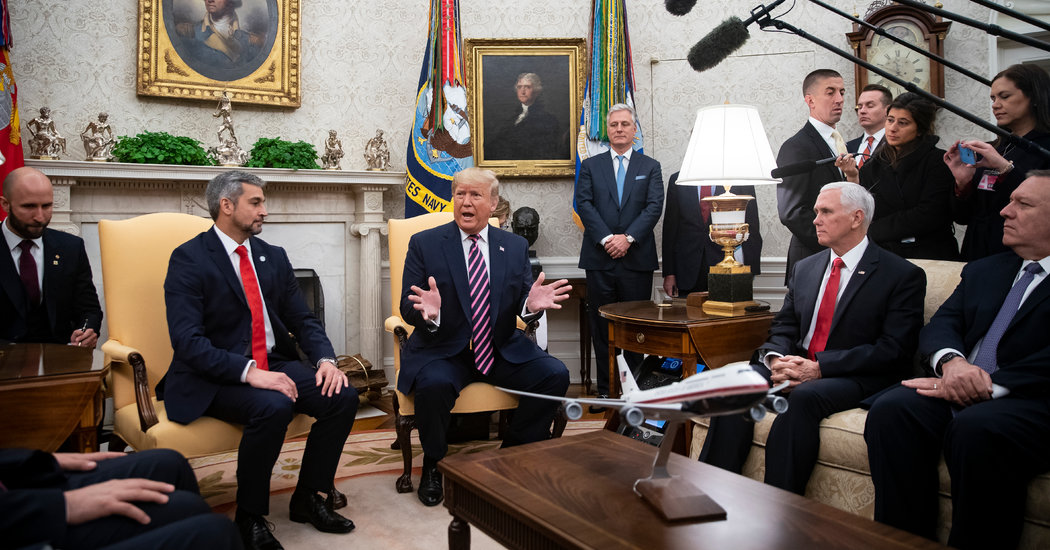 WASHINGTON — President Trump had plenty of good news to talk about on Friday, beginning with the news from across the Atlantic that a close ally, Prime Minister Boris Johnson of Britain, had just seen his party win a decisive majority in Parliament. There were also his accomplishments at home to promote: finishing the first phase of a trade deal with China, averting a government shutdown and moving forward with House Democrats on his signature North American trade pact.

“This has been a wild week,” Mr. Trump said, stating the obvious to reporters in the Oval Office as he praised Mr. Johnson and hailed the China accord as a “phenomenal deal.”

On any other day, the session with reporters would have been an unqualified victory lap for Mr. Trump, a leader who has long felt he does not receive enough credit for his policy accomplishments, and who on Friday had several such wins to crow about. Except that earlier in the morning, the House Judiciary Committee had voted to advance two articles of impeachment against him, prompting an all-but-certain impeachment vote and Senate trial.

Nothing about the vote was a surprise, but Mr. Trump’s private frustration and embarrassment over most likely becoming the third president in American history to be impeached bubbled again to the surface, at least momentarily, dashing the hopes of advisers who have been encouraging him to keep focused on “presidenting.”

“I think it’s a horrible thing to be using the tool of impeachment, which is supposed to be used in an emergency,” Mr. Trump said, scowling as he sat next to President Mario Abdo Benítez of Paraguay. “It’s a scam. It’s something that shouldn’t be allowed. And it’s a very bad thing for our country.”

The timing and mechanics of an impeachment trial in the Republican-controlled Senate remain in flux, but Mr. Trump said he would support a lengthy proceeding, an idea his aides have long said he favors. He added that it would give him a chance to learn more about a whistle-blower whose account of Mr. Trump’s July call with the Ukrainian president formed the basis of the impeachment inquiry.

The president’s support for a more drawn-out process was at odds with a plan set forth by Senator Mitch McConnell, Republican of Kentucky and the majority leader, who has tried to persuade the president to support an abbreviated trial.

“I’ll do whatever they want to do,” Mr. Trump said, before adding, “I wouldn’t mind a long process because I’d like to see the whistle-blower, who is a fraud.”

Mr. Trump’s extensive comments on impeachment seemed at least momentarily to conflict with the operative stance at the White House of emphasizing what the president was getting done for the American people — similar to the approach aides to President Bill Clinton took when he was impeached. But while Mr. Clinton seethed and obsessed over the proceedings in private, Mr. Trump’s use of his preferred pressure release valve — Twitter — hit a new peak this week.

“How do you get Impeached when you have done NOTHING wrong (a perfect call), have created the best economy in the history of our Country, rebuilt our Military, fixed the V.A. (Choice!), cut Taxes & Regs, protected your 2nd A, created Jobs, Jobs, Jobs, and soooo much more? Crazy!” Mr. Trump wrote Friday morning.

Mr. Trump was in a meeting in the White House residence and not watching television as the Judiciary Committee vote began, but he kept his aides close throughout morning. That group included two in-house strategists focused on impeachment messaging: Tony Sayegh, a former Treasury Department spokesman, and Pam Bondi, a former Florida attorney general. Other advisers described the president, who has publicly and privately marveled over the unity he sees in the Republican Party around impeachment, as in good spirits.

Another ally in the mix was Rudolph W. Giuliani, the president’s personal lawyer whose work to dredge up unflattering information on Mr. Trump’s political opponents landed him at the center of the Democratic-led impeachment effort.

Mr. Giuliani was ushered into the White House moments before the vote, and one senior administration official said he was there, in part, to talk about a trip he had taken to interview Ukrainians in Budapest and Kyiv, Ukraine’s capital, for an anti-impeachment documentary.

Last month, Mr. Giuliani told an associate that Mr. Trump had approved of his participation in the documentary when he briefed the president about it during a meeting at the Trump International Hotel in Washington.

By the time the Paraguayan president arrived at the White House just before noon, Mr. Trump was flanked by several additional advisers, including Vice President Mike Pence, Secretary of State Mike Pompeo and Robert C. O’Brien, his national security adviser.

“It’s a very sad thing for our country but it seems to be very good for me politically,” Mr. Trump said. “The polls have gone through the roof for Trump.”

Mr. Trump and his advisers firmly believe they are winning the public opinion battle around impeachment. His advisers are leaning on polls they say show shifting fortunes in politically crucial swing states, and they are closely watching the behavior of House Democrats they believe are in vulnerable districts.

Frank Luntz, a longtime Republican pollster, offered a different assessment: Public opinion has remained polarized and static as impeachment moves forward, even with a strong economy and several trade accords in the making. “When taken together it’s a political home run,” Mr. Luntz said.

At least, it should be.

“The president never gets the credit he deserves because there’s always something ugly under the surface,” Mr. Luntz added. “Any other president would be in the 60th percentile after a week like this.”

The president’s approval rating continues to hover around 41 percent, according to national polls.