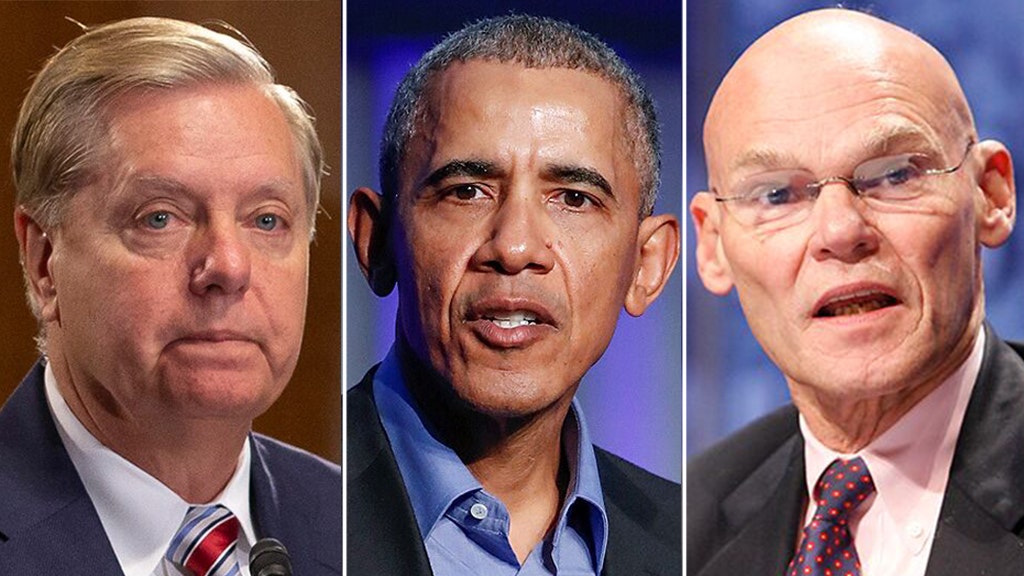 “Please call Obama — in the name of a just and merciful God, please call Barack Obama in October for your committee so every African-American Democratic voter can see exactly who you are,” he told “The Stuttering John Podcast” on Thursday.

“We don’t even need a turnout program at that point … Barack Obama’s IQ is like 85 points higher than Lindsey Graham or any other sitting Republican. So, I urge you Lindsey Graham, I beg of you: Please, please and bring Michelle up there with him too,” Carville added, referring to the former first lady.

Carville was referring to President Trump’s request that Obama testify as part of an effort to hold his administration’s officials accountable for what he says were abuses during the Russia investigation.

Graham, however, has already indicated he’s not interested in requesting Obama’s testimony.

In an interview on the “Brian Kilmeade Show” with host Brian Kilmeade, Graham said that he does not want to “wreak havoc on the institution” like House Intelligence Committee Chairman Adam Schiff, D-Calif., did during the impeachment trial against the president earlier this year.

“So, if I find something that makes me suspicious of President Obama, if he may have been part of committing a crime against General Flynn or anyone else, I will turn that over to Mr. [John] Durham,” he promised, referring to the U.S. attorney who is investigating the origins of the Trump-Russia probe.

“I tell you if you have a problem figuring out whether you’re for me or Trump, then you ain’t black,” Biden said during an epsiode of “The Breakfast Club” on Friday.

Graham responded by tweeting that Biden’s comments would guarantee the opposite of what Carville predicted.

“The comments from @JoeBiden were truly offensive, but a rare and honest insight into liberals thinking,” he said. “Liberals believe you really can’t be black, Latino, female, or intelligent unless you support their liberal agenda.”

“This attitude is wearing thin and one of the reasons President @realDonaldTrump will be reelected.”

Earlier in Carville’s interview, he argued that Trump was a “big fat loser” who would lose in November. “Alright, he’s gonna get his fat a– beat. The question is by how much. … If we go and take it to him and talk about what a massive, fat failure he is, then we can run away with this thing,” he said.