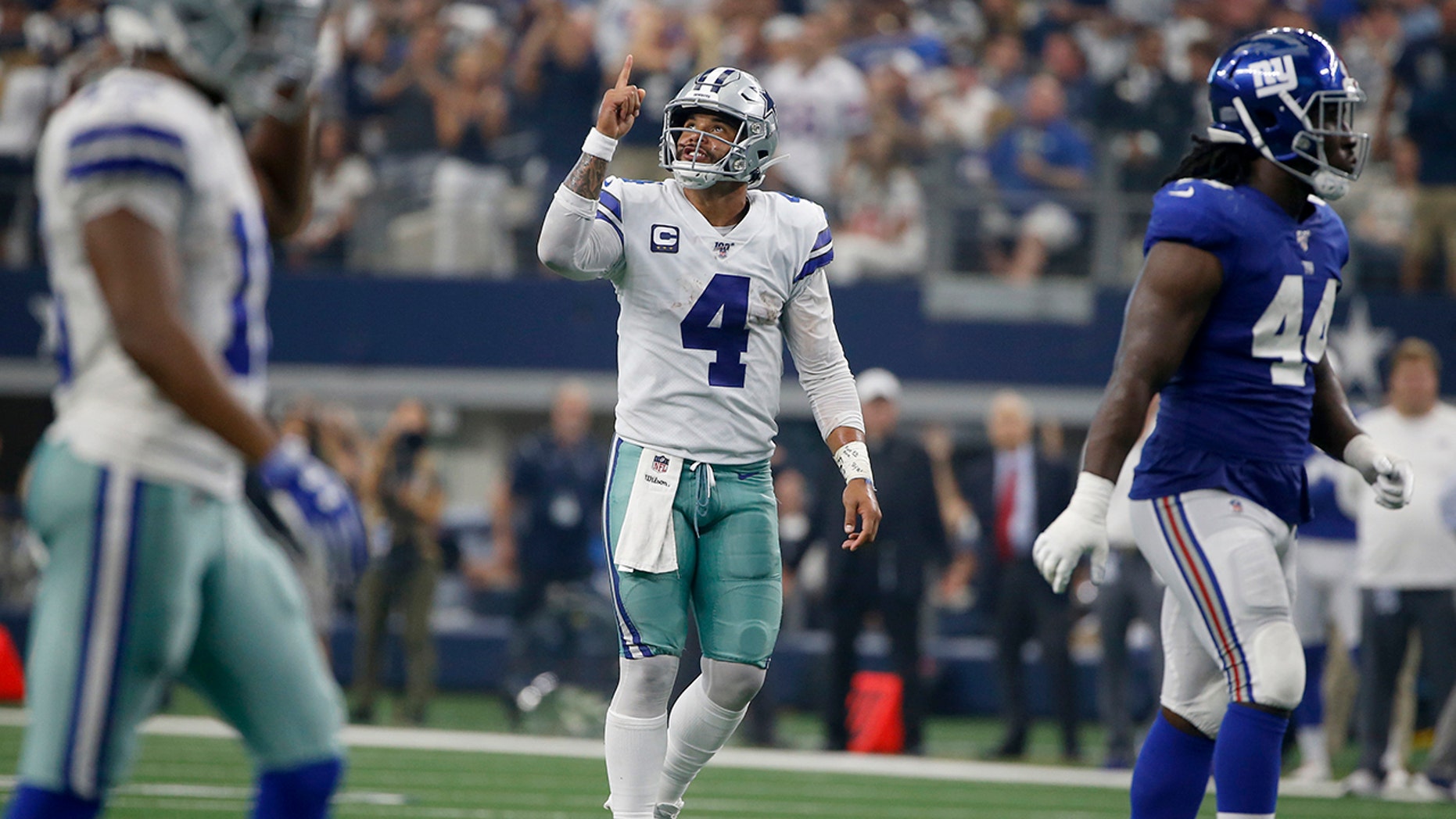 Dak Prescott still doesn’t want to talk about his contract.

Dallas Cowboys owner Jerry Jones says his star quarterback might not have to dodge the questions much longer.

After Prescott helped lighten the load on Ezekiel Elliott in the running back’s return from a long holdout by tying a career high with four touchdown passes in a 35-17 season-opening win over the New York Giants, Jones said a deal with the two-time Pro Bowler was “imminent.”

“Oh, yes, I do know that we’ll get it done,” Jones said Sunday night. “It would probably be fair to say it’ll be done on an imminent basis. Imminent. Without being real clear, bright lined. It’s not done. What’s imminent? Well, days. Days. Or something like that.”

Saquon Barkley ran 59 yards on his first carry of the season, setting up Eli Manning’s touchdown pass for a 7-0 lead. But the Giants simply couldn’t keep up with a Dallas offense eager to see what could happen at full strength.

“I think we moved the ball well, did a lot of good things,” Manning said. “Just didn’t play well enough, and just keep up with what Dallas was doing. And the second half kind of got out of hand.”

As expected, Elliott didn’t seem to be in peak form after spending almost all of the preseason trying to stay in shape in Mexico while waiting for the $90 million, six-year contract extension that was settled on the morning of the first full workout of the regular season.

The two-time NFL rushing champion did find a seam for a 10-yard touchdown to put the Cowboys up 35-10 late in the third quarter. Elliott finished with 53 yards on 13 carries.

“Obviously, I was a little rusty,” said Elliott, who had one catch for 10 yards as coach Jason Garrett acknowledged the Cowboys wanted to keep his snap count down, with the coach saying the number ended up in the low 30s.

“I didn’t have the best game I’ve ever had. I have to improve, but that’s just going to come with time and just getting more reps.”

This going-away win was all about Prescott in his second career 400-yard game, a 405-yarder in the first game of his fourth season.

Prescott’s representatives and the Cowboys were working on a deal for a new contract in the days before the opener, but now the issue will linger into the season. Perhaps the NFL’s best bargain ($2 million salary in the final year of his rookie deal) isn’t getting any less expensive.

“I have people that handle that,” Prescott said. “My focus is on this team, on the football game. I think as long as I can continue to do that, this team will do things like we did tonight. That’s been all my focus for the past three months.”

The 2016 NFL Offensive Rookie of the Year thrived in play-caller Kellen Moore’s debut, making several perfect throws on his way to a perfect passer rating of 158.3.

Prescott completed 25 of 32 passes without an interception, finding seven different receivers while two of them had 100-yard days: Michael Gallup (seven catches for 158 yards) and Amari Cooper (six for 106).

One of the on-the-money tosses was a 21-yard touchdown to Cooper, who’s in his first full season with Dallas after a midseason trade that boosted a stagnant offense and helped send the Cowboys to their second NFC East title in three seasons with Prescott and Elliott.

Prescott babied a throw to Blake Jarwin because the tight end was so open over the middle on a 28-yard score that was Jarwin’s fourth touchdown in two games against the Giants. The other three were in last year’s finale at the Giants, also Prescott’s other four-TD game.

The career high-tying TD pass for Prescott was to the newcomer among his receivers, Randall Cobb, who was wide open over the middle on a 25-yarder for a 28-10 lead.

A multitude of offseason changes on defense didn’t help the Giants, last in the NFC East in 2018. After taking the early lead on Manning’s 1-yard toss to Evan Engram, they gave up TD drives of 75, 93, 83, 75 and 89 yards on five consecutive possessions from the first through third quarters.

Barkley ended up with 120 yards on 11 carries after the huge opening run along with four catches for 19 yards. But most of those yards didn’t matter much because the Giants couldn’t get the Cowboys off the field until the outcome had been decided. Engram had 10 catches for 110 yards. New York ended up with 470 yards.

Jason Witten — back for a club-record 16th season for Dallas after a year in retirement as a broadcaster — scored his 69th career touchdown on a 4-yard grab. Manning reached the same milestone with the Giants while starting his 15th consecutive opener.

Daniel Jones, the sixth overall choice in the draft, made his NFL debut in the final two minutes. Jones had a strong preseason after facing criticism when the Giants made the surprising pick. The heir apparent to the 38-year-old Manning was 3 of 4 for 17 yards and lost a fumble on a play that was reversed after he was ruled down. “I thought it was the right thing to do to get him some work,” coach Pat Shurmur said.

Cowboys: At Washington next Sunday.