Juul Replaces Its C.E.O. With a Tobacco Executive

The vaping powerhouse Juul Labs replaced its chief executive with a veteran of Big Tobacco on Wednesday, deepening the company’s turmoil and raising doubts about the very future of the e-cigarette industry.

The sudden announcement capped a relentless cascade of events that has called into question the safety of devices once billed as a promising alternative to cigarettes, one of the world’s leading preventable causes of death. Now, Juul is looking to that very industry for its survival as it faces a federal criminal inquiry, new bans on some of its products, and an onslaught of state and federal regulatory investigations into its marketing practices.

Early Wednesday morning, after frantic days of internal meetings, the company announced that its current chief executive, Kevin Burns, would resign as chief executive. His chosen replacement is K.C. Crosthwaite, a top official at Altria, the cigarette giant that bought a 35-percent share in Juul for $12.8 billion last December and has seen the company it invested in rocked by growing crisis.

In another sign of regulatory and business uncertainty, Altria and Philip Morris International said on Wednesday that they had ended talks to merge, dashing the chances of reuniting the two arms of what had once been the tobacco giant Philip Morris.

The e-cigarette industry — which Juul commands, with more than 70 percent of the market — is being threatened by twin public health crises: the rise of teenage vaping, which public health officials fear could create a new generation of nicotine addicts, and a surge of severe lung illnesses, including at least 11 deaths, linked to vaping.

Dr. David Kessler, a former commissioner of the Food and Drug Administration, said that in light of the epidemic of youth vaping, he doubted that any e-cigarette company could now prove that the benefits of its products outweighed the risks — a critical factor to win agency approval to stay on the market in the United States.

“In some ways the last several years has provided a record where it’s hard to see that these products could ever meet the ‘protection of public health standard,’” Dr. Kessler said. “And if they can’t meet that standard, they can’t be marketed.”

Testifying at a congressional hearing on Wednesday, the acting F.D.A. commissioner, Dr. Ned Sharpless, appeared to echo that sentiment, saying, “We really don’t think anyone should be using e-cigarettes, except perhaps a person who is using it instead of a combustible cigarette.”

Dr. Sharpless said the agency could have done more to keep the products away from teenagers. “In retrospect the F.D.A. should have acted sooner,” he said. “We’re going to catch up.”

In addition to the deaths, 530 cases of the lung sicknesses have been reported by the Centers for Disease Control and Prevention, causing public health agencies to warn most people to refrain from vaping any substance.

Many of the patients have said they had been vaping THC, the high-inducing ingredient in marijuana, when they became short of breath and grew sicker, officials have reported. But some said they were using just nicotine, or both.

Juul sells only nicotine products along with its sleek and popular vaping pens. Nevertheless, the company has become synonymous with vaping generally for much of the public.

“Juul is the face of the current public health crisis. Heads need to roll,” said Stefanie Miller, a co-founder of Sandhill Strategy, which consults with investment firms on regulatory policy, particularly tobacco-industry regulations. “To see the top head roll is a sign to public health, investors, to everyone that they know they need to make some changes.”

In announcing its change of leadership, Juul appeared to cave on issues that could be detrimental to its business. It said it would not fight a Trump administration proposal to ban most flavored e-cigarettes, which would slash its domestic sales. The company also said it would end one of its marketing campaigns, “Make the Switch,” which the F.D.A. warned could be construed as an illegal effort to portray its e-cigarettes as safer than traditional cigarettes.

A Juul employee said the company was also considering whether it should abandon its multimillion-dollar campaign on a ballot initiative to overturn an e-cigarette ban that is to take effect in San Francisco early next year. 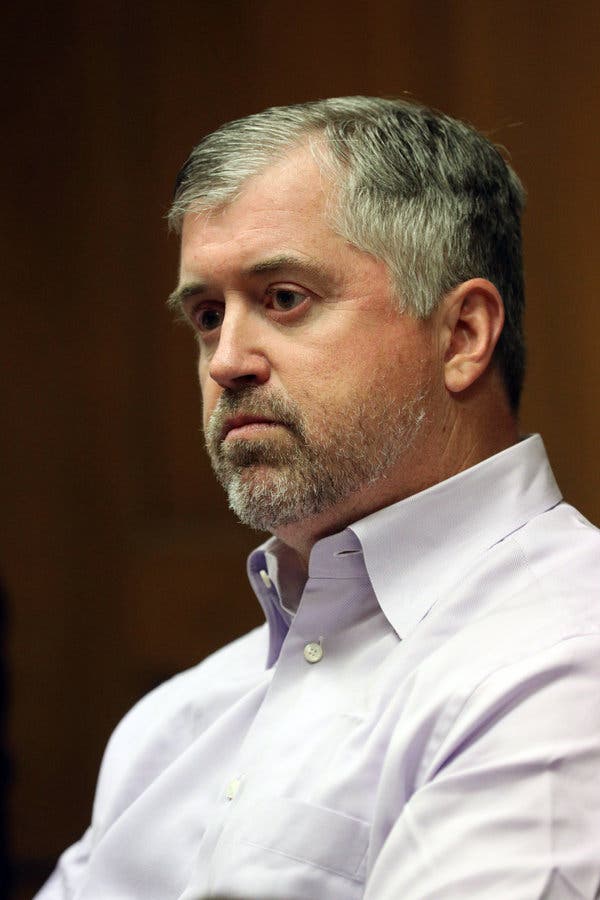 Within the last week alone, several television networks decided to stop broadcasting Juul’s ads; Massachusetts announced a four-month ban on the sale of all vaping products; Rhode Island announced a ban on flavors; Walmart said it would stop selling all e-cigarettes; and the F.D.A. announced it had opened a criminal inquiry into the supply chain of vaping products and devices. The Federal Trade Commission also has been investigating Juul’s marketing practices. And the United States attorney for Northern California opened a criminal investigation into the company, a development first reported by The Wall Street Journal.

On Sept. 10, President Trump met with Dr. Sharpless and Alex M. Azar II, the health and human services secretary. After informing the president of another spike in teenage vaping, the two officials said they would issue the proposed ban on most flavored e-cigarettes within several weeks.

That would include mint and menthol, they said, although some vaping industry leaders have vowed to contest the inclusion of those two items. Juul has said mint and menthol now account for about 80 percent of its products and a ban on those would severely hurt its domestic sales.

All of this foreshadows a regulatory showdown at the F.D.A. that is slated to begin in May next year when the agency will determine what, if any, e-cigarettes can remain on the domestic market.

“The United States is moving toward asking vaping companies for permission to sell any products,” Ms. Miller from Sandhill Strategy said. “The people they’re asking, the F.D.A., have shown these products are killing people.”

The turn in fortunes for Juul, and perhaps e-cigarettes generally, culminates one of the biggest disagreements in public health in recent years: whether e-cigarettes would prove a benefit to society. Supporters of e-cigarettes have argued that these devices have the potential to save millions of lives and billions of dollars by providing a safer alternative to the nation’s leading killer, traditional cigarettes.

Some investment advisers pointed to the disarray with e-cigarettes as a potential benefit to traditional smoking. “The recent media scrutiny on vaping will help overall cigarette consumption,” Nik Modi, a tobacco-industry analyst for RBC Capital Markets, wrote in a message to investors.

In recent weeks, as Juul sales have slowed, sales of cigarettes declined at a slower pace with each passing week, according to Nielsen, a market-research firm.

But skeptics have said all along that not enough is known about the long-term health effects of e-cigarettes and assert that they, and Juul, in particular, have spurred heavy experimentation by teenagers.

The upshot may drive the market for e-cigarettes overseas, a market that Juul’s new chief executive, Mr. Crosthwaite, highlighted to employees in an all-hands meeting at the company headquarters on Wednesday morning.

“International expansion continues to be a huge opportunity given the number of smokers around the world,” he told employees.

But the company’s initial foray in China this month failed almost immediately, and last week India also said it would ban the sale of e-cigarettes.

Mr. Crosthwaite, in coming from Altria, brings to Juul the experience of working for one of the most regulatory-savvy companies in the world; the tobacco industry has navigated perilous straits in keeping its product on shelves and pushing internationally, despite cigarettes being a proven, addictive killer.

In a speech to a tobacco industry gathering in Washington on Wednesday, Howard Willard III, chief executive of Altria, said Mr. Crosthwaite would help Juul “urgently control, confront and reduce youth vaping,” and deal with the company’s other problems.

“This is a pivotal moment,” he said. “Vaping is at an inflection point.”

Dr. Ned Sharpless, the F.D.A. acting commissioner, testified about the threats of e-cigarettes to the public before a House subcommittee on Wednesday.CreditPete Marovich for The New York Times

Despite the public concerns, Altria invested $12.8 billion in Juul in 2018 for a 35 percent stake, valuing Juul at about $38 billion. Mr. Crosthwaite became a board observer at Juul.

IQOS is a penlike electronic device with a battery pack that resembles a cigarette case. It features a heating blade that warms a tobacco stick and emits a vapor with the taste of tobacco, but with fewer noxious chemicals than cigarette smoke. The F.D.A. has approved it for sale in the United States and said the product could help people to quit smoking. The agency is still weighing whether to permit Altria to be marketed as a reduced-risk product.

Investors had appeared largely skeptical of the potential deal, despite the companies arguing that reuniting could revive their fortunes amid a decline in cigarette sales.

On Wall Street, analysts said they were not that surprised by the abrupt end to the merger talks, especially given the steady drumbeat of negative headlines around vaping and Juul’s products. The stock of Philip Morris International ended Wednesday up more than 5 percent at $75.28, while Altria’s stock ended essentially flat at $40.56.

But Altria is likely to face a bumpier future amid the uncertainty around Juul.

Analysts said it was increasingly likely that Altria might have to write down the value of its $12.8 billion investment in Juul, given the recent developments and uncertainty surrounding the company.

“When the Juul transaction was done, it valued the company at around $37 billion,” said Garrett Nelson, an analyst at CFRA Research. “Juul’s valuation today is probably a fraction of that.”

Meanwhile, Altria’s debt levels more than doubled as it borrowed to buy the Juul stake, he noted.

Tim Hubbard, an assistant professor of management in the University of Notre Dame’s Mendoza College of Business, said it was not surprising that Mr. Burns was stepping down from the company as it had struggled to adapt to the swift change of perceptions, from a company that was providing an alternative to smoking to one that had been vilified.

“When compared to traditional tobacco products — which have remained on the shelves for decades despite being proven dangerous — e-cigarette makers have failed spectacularly,” Mr. Hubbard said in an email. “Bringing in a traditional tobacco executive who knows how to market and manage government relationships with deadly products matches the firm’s needs.”