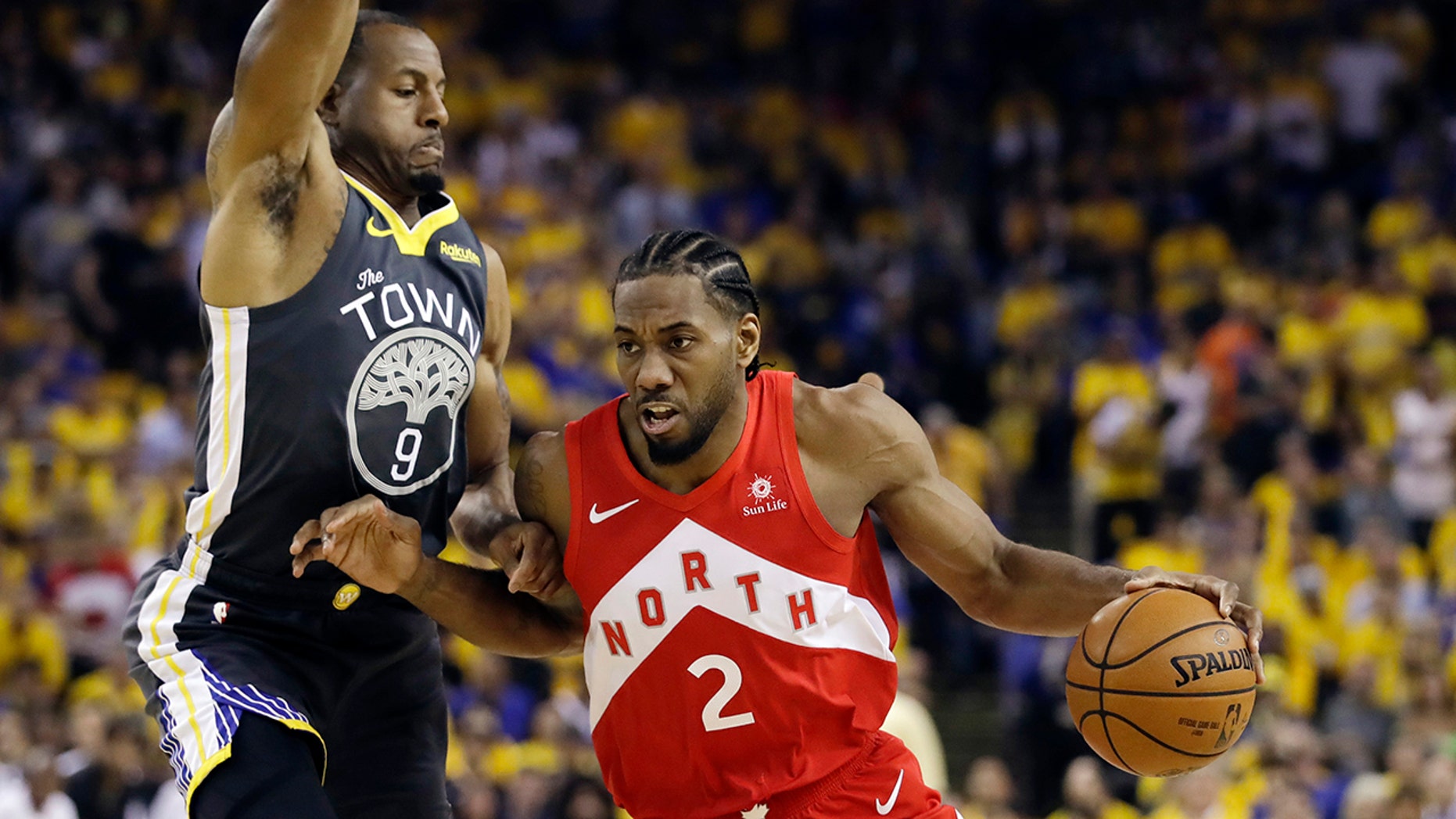 FILE – In this June 13, 2019, file photo, Toronto Raptors forward Kawhi Leonard (2) drives against Golden State Warriors forward Andre Iguodala (9) during the first half of Game 6 of basketball’s NBA Finals in Oakland, Calif. A person familiar with the negotiations says the Los Angeles Clippers will be landing Kawhi Leonard as a free agent after they acquire Paul George from the Oklahoma City Thunder in a massive trade for players and draft picks. (AP Photo/Ben Margot, File)

Paul George and Kawhi Leonard are now officially with the Los Angeles Clippers, moves that bring both of them back to their native Southern California.

It might not be forever: Both can become free agents in only two years.

The Clippers completed their blockbuster trade with the Oklahoma City Thunder on Wednesday, acquiring George for guard Shai Gilgeous-Alexander, forward Danilo Gallinari and five first-round draft picks — along with the chance to swap draft places in two other years.

“Paul George is one of the greatest two-way players in our game,” Clippers President Lawrence Frank said. “He is both an elite scorer and a relentless defender whose versatility elevates any team. When you have the opportunity to acquire a contributor of his caliber, you do what it takes to bring him home.”

George can become a free agent again in 2021 if he chooses to exercise that option, and Leonard will be in the same situation as well. A person with knowledge of the situation said that the deal Leonard signed Wednesday is a three-year max that could be worth nearly $110 million, though the third season is at Leonard’s option. The person spoke to The Associated Press on condition of anonymity because the Clippers did not release contract terms.

The Athletic first reported the three-year term and option provision in Leonard’s deal. When Leonard decided that he was leaving Toronto for the Clippers last week, he and the team had talked about a four-year max worth $141 million — but this move, which would make Leonard a free agent after his 10th season, gives him the maximum amounts of flexibility and future earning power.

“This is a historic moment for our organization and our fans,” Frank said. “We are grateful and honored that Kawhi Leonard has decided to come home and join the L.A. Clippers. Kawhi is a peerless two-way player, a relentless worker and a natural fit for the serious, professional culture our group has established.”

Another major deal got completed Wednesday: Klay Thompson, who will miss part of next season while recovering from a torn ACL, signed his five-year deal to stay with Golden State for nearly $190 million — the largest free-agent one agreed to this summer. Portland‘s Damian Lillard signed a $196 million extension that begins in two years, but he wasn’t a free agent. The Warriors also waived Shaun Livingston, who was part of all five of their NBA Finals teams over the last five seasons.

“He has been a tremendous credit to the Warriors organization and our community for the last five years,” Warriors co-chairman and CEO Joe Lacob said of Livingston.

Leonard will cost the Clippers a lot of money.

George is costing them a lot of money and a lot of picks.

The Clippers surrendered their first-rounder picks in 2022, 2024 and 2026, plus sent ones for 2021 and 2023 that were obtained through Miami, to Oklahoma City to complete the George trade. Oklahoma City also has the right to swap first-round picks with the Clippers in 2023 and 2025.

“From the time that Paul and his representation made us aware of what had been transpiring and their subsequent request, our focus as an organization was identifying the best paths for our future,” Thunder general manager Sam Presti said. “Resiliency has been a staple of our city and our franchise, and this challenge provided us with another opportunity to demonstrate that.”

The Thunder also now have a $10.4 million trade exception.

“Our goal with this transaction was to create value both in the short and long term and help reposition and replenish the organization’s future platform,” Presti said. “We are thrilled to welcome two extremely talented and efficient players in Shai and Danilo.”

It’s unclear if Presti is done making big moves this summer. The Thunder has engaged teams in conversations about the possibility of trading All-Star point guard Russell Westbrook, a person familiar with that situation told the AP. Miami is one of the teams that has been part of those talks, the person said, speaking on condition of anonymity because the Thunder have not revealed specific details.

“We are proud that Paul is a part of our history as an organization and that some of the best basketball of his career was in Oklahoma City,” Presti said. “He should be remembered fondly; we wish him and his family the best.”

George averaged a career-best 28 points last season even while dealing with shoulder issues that required surgery, and the Thunder couldn’t get out of the first round in either of his two seasons in OKC. George was a finalist for both NBA MVP and Defensive Player of the Year this past season, when he led the league with 2.21 steals per contest.

Leonard is also coming off the best season of his career. Leonard averaged a career-high 26.6 points in the regular season and was even better in the playoffs, averaging 30.5 points for the Raptors in their run to the title. He won NBA Finals MVP honors for the second time, adding this one to the one he got as a member of the San Antonio Spurs in 2014.

“His expectation, and ours, is to contend for championships,” Frank said.

— The Philadelphia 76ers completed the signings of forwards Tobias Harris (who ended last season with Philly) and now-former Boston Celtics standout Al Horford. Both of those deals were agreed upon last week.

“We’re excited to welcome one of the NBA’s best frontcourt players in Al Horford to Philadelphia,” 76ers general manager Elton Brand said. “He has built his reputation around hard work and a tradition of winning, which are the same qualities that have formed the foundation of the 76ers. Al’s playmaking, elite defensive talents and veteran leadership confirm why he is a crucial addition to our roster.”

— Washington completed the signing of two-time All-Star Isaiah Thomas to a one-year deal. He fills a major position of need for Washington, which is bracing to be without John Wall next season.

Thomas said he’s simply looking for a chance to prove himself again. Injuries have limited him to 44 games over the last two seasons.

“I want to compete. I want to win,” Thomas said. “That was one of the most important things in the Wizards’ meeting. I’m coming here to win. I don’t know any other way. They felt the same way.”