The mother and grandmother of Michael Brown, a decorated U.S. Marine now on the run after allegedly killing his mother’s boyfriend in Virginia, pleaded with him Friday to turn himself in.

“Please trust us when we tell you to trust the authorities and turn yourself in,” his grandmother, Diane Hanson, told Roanoke’s WFXR-TV.

Brown, 22, allegedly deserted his post at Marine Corps Base Camp Lejeune in North Carolina last month after he was accused in the shooting death of Rodney Brown on Nov. 9.

On Friday, authorities in North Roanoke cleared a search area after investigating a report of a possible sighting of Brown walking along train tracks. But authorities said they could not confirm Brown was in the area, WSLS-TV of Roanoke reported.

Also on Friday, the U.S. Marine Corps confirmed that Brown was considered a deserter, WDBJ-TV of Roanoke reported. A Marine Corps spokesman told the station Brown did not show up for duties Oct. 24, was listed as AWOL the next day, and was declared a deserter Nov. 10, the day after Rodney Brown was killed. 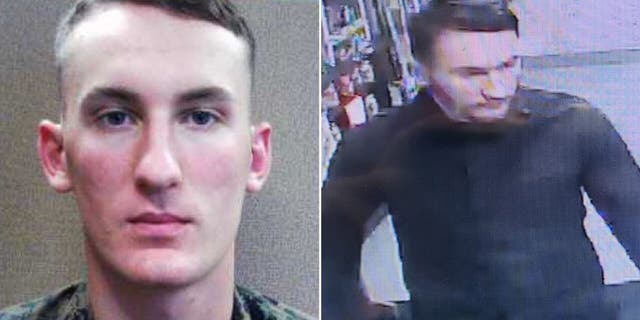 “I don’t want you hurt, please,” his mother, Vanessa Hanson, said.  “Michael you’re my baby I love you please I can’t lose you. I’m scared for you.”

Several agencies in North Carolina and Virginia — in addition to the U.S. Marshals, FBI, and Naval Criminal Investigative Service (NCIS) have been conducting a massive manhunt for him.

His mother went on to say they would help him get a lawyer if he turned himself in.

“I can’t lose another person,” she added.

“Michael I know that you’re alone and afraid right now but there are people who want to help you,” his grandmother told WFXR. “We still care about you. Please turn yourself in. Nobody wants to see you die also.”

Authorities said Brown should be considered “armed and dangerous.”