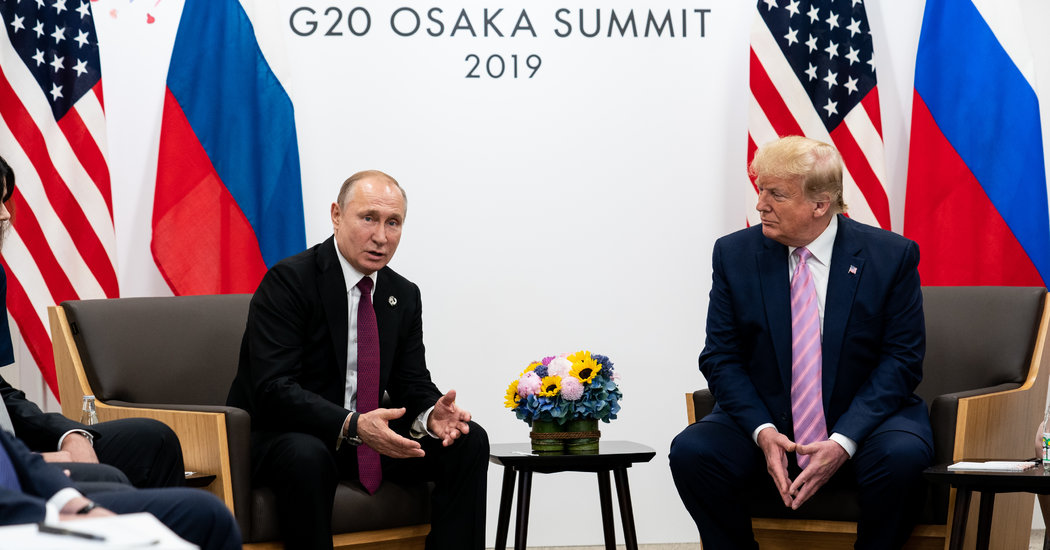 MOSCOW — Amid the uproar over President Trump’s call to the leader of Ukraine, the Kremlin said on Friday that it hoped the contents of Mr. Trump’s phone conversations with President Vladimir V. Putin of Russia would not be made public — a disclosure that would likely generate far more attention.

Mr. Trump’s conversations with Mr. Putin have been an enduring mystery and a subject of intense interest, given the evidence that Russia interfered in the 2016 election to benefit Mr. Trump, who has adopted a friendlier stance toward Moscow than his predecessors.

Two days after the White House released a reconstruction of Mr. Trump’s call with the Ukrainian leader, Volodymyr Zelensky, the Kremlin spokesman Dmitri S. Peskov was asked if he worried about the confidentiality of the American president’s contacts with Mr. Putin.

“We would like to hope that we would not see such situations in our bilateral relations, which already have plenty of quite serious problems,” he said in a conference call with reporters.

He emphasized that accounts of phone conversations between leaders were classified. The release this week was “quite unusual,” he added.

Asked if the Kremlin would be ready to agree to release the contents of a phone call with Mr. Trump, Mr. Peskov said that such situations should be treated on a case-by-case basis.

“No one has turned to us with such requests,” he said.

Some Democrats, charging that Mr. Trump may be beholden to the Kremlin, have said that the White House should disclose more of what he and Mr. Putin have said to each other. But those calls have never reached the fever pitch prompted by a whistle-blower’s complaint about Mr. Trump’s July 25 call to Mr. Zelensky.

Based partly on that complaint, Speaker Nancy Pelosi began a formal impeachment inquiry of the president on Tuesday. The White House record of the call shows that Mr. Trump repeatedly urged Mr. Zelensky to order Ukraine’s government to investigate former Vice President Joseph R. Biden Jr. — a leading candidate running against the president — and his son Hunter.

Mr. Trump has urged Mr. Zelensky to strike a peace deal with Russia, which seized Crimea from Ukraine in 2014 and has since that year supported separatist rebels trying to break eastern Ukraine away from the country.

Russia’s aggression prompted Western economic sanctions and Russia’s expulsion from the Group of 8 nations. Undoing those penalties is high on Mr. Putin’s agenda, and would depend on making peace with Ukraine.

Mr. Trump has said that Russia should be readmitted to what is now the Group of 7. And he has suggested that he believes Mr. Putin’s denials of Russian meddling in 2016, rather than the conclusion of United States intelligence agencies that the interference took place.

At a lengthy news conference at the United Nations, Russia’s foreign minister, Sergey V. Lavrov, appeared to studiously avoid calling on American reporters, presumably to avoid questions about Ukraine. When at last, a reporter from CNN was able to ask about the issue, Mr. Lavrov described it as unseemly and a violation of diplomatic decency.

“My mom taught me that it was improper to read other peoples’ letters,” Mr. Lavrov said. “There are traditions and manners, including in diplomacy, that presume a certain level of confidentiality.”

Over the past three years, Mr. Putin has had 11 phone conversations with Mr. Trump, the most recent in July, according to the Kremlin’s website. Only brief descriptions of the calls have been published by both sides.

The two leaders have habitually discussed the urgent need to improve bilateral ties, something that appeared more difficult than was expected when President Trump was elected, as well as an array of international issues, from nuclear disarmament in North Korea to conflict resolution in Syria and Ukraine.

In 2018, President Bill Clinton’s library released transcripts of his phone calls with President Boris N. Yeltsin of Russia. The transcripts revealed many interesting details about the bilateral relations, but also about Russia’s own history at a pivotal moment in 1999, when Mr. Yeltsin decided to select Mr. Putin as his successor.

“It took me a lot of time to think who might be the next Russian president in the year 2000,” Mr. Yeltsin told Mr. Clinton at the time, according to the transcript.

“Finally, I came across him, that is, Putin,” he said. “He’s tough. He has an internal ramrod,” said Mr. Yeltsin. “He will continue the Yeltsin line on democracy and economics and widen Russia’s contacts.”