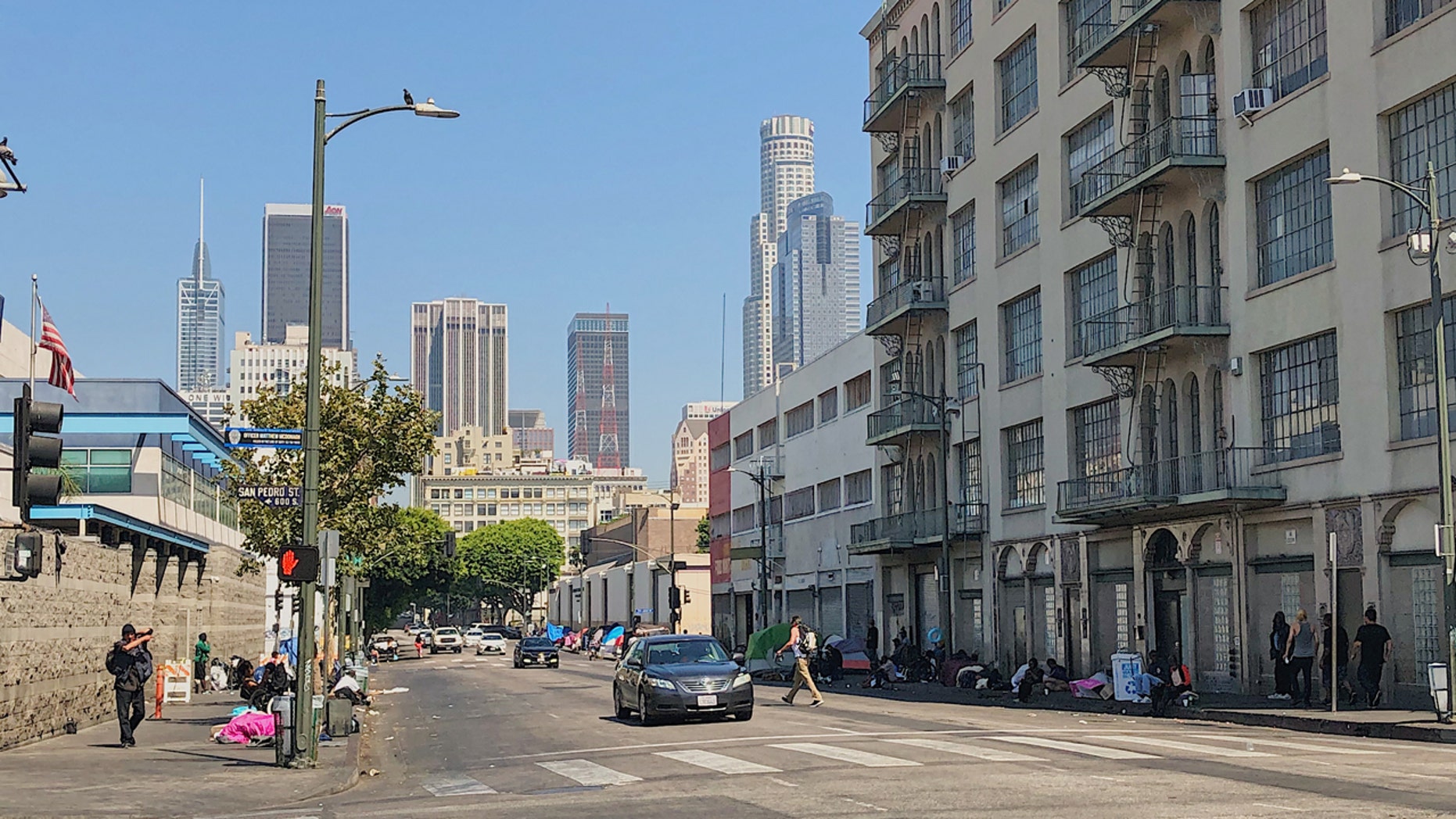 The intersection of 6th St. and San Pedro St. in Los Angeles is the center of Skid Row. (Andrew O’Reilly/Fox News)

City officials, developers and restaurateurs in Los Angeles are touting the renaissance of the city’s once-blighted downtown thanks to an explosion of trendy eateries, chic hotels and luxury apartments that have attracted thousands of new – and generally financially well-off – residents to the neighborhood in recent years.

But just a few blocks south of the area where a set-course sushi meal costs around $200 per person – wine or sake not included – is perhaps the country’s most notorious tent city and a neighborhood that has been labeled the epicenter of homelessness in America: Skid Row.

The area — which has been plagued by vagrancy, high crime rates and unsanitary conditions almost since its development in the 1880s — is an unorganized collection of warehouses, wholesale storefronts and decaying low-rent hotels. Its trash-strewn streets are lined with the blue tarps and fraying tents of those residents unable to afford a solid roof over their heads.

But as development in Downtown Los Angeles steams forward unimpeded, city officials and developers are eyeing Skid Row as possibly the next “up-and-coming” neighborhood – a move causing tensions with advocates and community outreach workers who wonder what this means for the thousands of homeless and itinerant people who currently call the rundown area home. 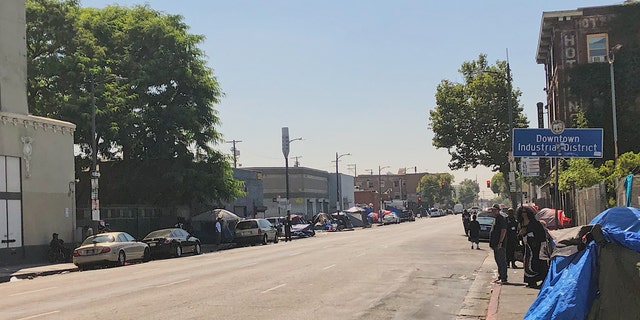 Advocates and community outreach workers worry what housing development will mean for the thousands of homeless and itinerant people who currently call the rundown neighborhood home. (Andrew O’Reilly/Fox News)

“Most of Skid Row is already being carved up,” Jerry Jones, the director of public policy at the Inner City Law Center in Los Angeles, told Fox News. “We need to help those who live on Skid Row right now.”

The population of Downtown Los Angeles, which encompasses Skid Row and a number of other smaller neighborhoods, has seen its population skyrocket from just 18,000 people two decades ago to currently 76,000. There are also development plans bouncing around city hall that could bring 176,000 new residents to downtown by 2040.

Activists were enraged last June by a city proposal to rezone an industrial section of Skid Row to residential and open it up for market-rate development – a plan that supporters said would continue to the growth of downtown and create much-needed mixed office and living spaces in a city dealing with a major housing shortage.

While the proposal did call for putting social service agencies and permanent supportive housing in other parts of Skid Row, advocates for the neighborhood worried that it would drive up rents and displace some 4,000 people who currently live in the area’s single-room occupancy hotels and other modest lodgings.

In a concession to activists, a new rezoning plan released earlier this month calls for the conversion of parts of Skid Row into housing for residents earning between $10,000 and $58,000 annually. The plan also calls for any new development in bordering neighborhoods like the Arts District and Little Tokyo to include units for low-income residents.

Craig Weber, principal planner for the city of Los Angeles, told the Los Angeles Times that the new rezoning initiative is meant to create “housing opportunities for all.”

“The plan seeks to expand the opportunity for affordable housing through policies, zoning and the community benefits program,” he said.

Unlike cities like New York and nearby Santa Monica, Los Angeles currently does not have any laws on the books that require developers to mark off a certain percentage of new units for affordable housing.

Skid Row advocates like Jones say that the new rezoning plan is a start, but it doesn’t address the area’s homeless crisis and will most likely still displace the itinerant population of Skid Row into adjoining neighborhoods like Boyle Heights and University Park.

“It’s a huge opportunity that has been lost,” he said. “Any proposal to build in the area should benefit the current residents of Skid Row first.”

Los Angeles Mayor Eric Garcetti and other city lawmakers appear fully aware that Skid Row has become the epicenter of a homeless crisis flaring across major California cities – specifically prioritizing the neighborhood in the mayor’s plan to tackle homelessness and allocating $7 million from the $124 million the state recently approved for improving the health and safety of city residents. This comes after the city already spent $20 million last year to expand hygiene infrastructure and street cleanups in the community. 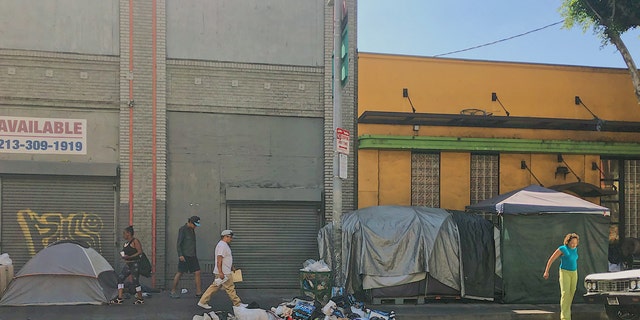 “We all know the epicenter of this crisis is Skid Row,” Garcetti said during a press conference on Monday. “It’s where the extreme poverty cuts the deepest, it’s where the racialized elements of this homelessness crisis are most seen.”

He added: “The days of writing off this community are over.”

Besides the hygiene initiative, the city also has plans to build a bin facility for Skid Row residents to store their belongings, start a cleaning initiative that would hire residents to clean the streets and construct crisis beds for women in Skid Row at Downtown Women’s Center.

Activists say that the city’s initiatives are a good start, but to really remedy the dire situation that many on Skid Row find themselves in, a real roof over their heads is the most important thing.

ICLC’s Jones argues that different types of housing are needed to address the complexities of the homeless crisis in Los Angeles – from permanent supportive housing with on-site health professionals to deal with issues like mental illness and drug addiction to transitional housing for homeless youth and families trying to get back on their feet.

“Different people need different housing, but one thing they all need is a house,” he said. 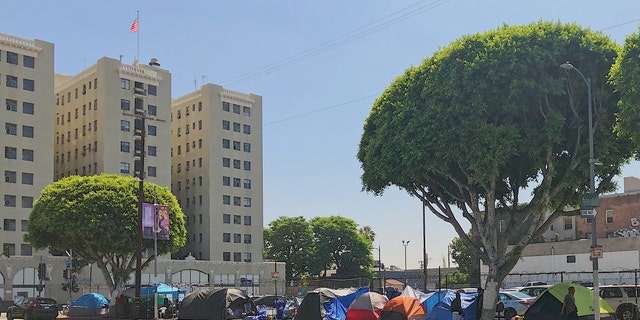 The tent encampment on San Pedro St. in Skid Row borders a parking lot that is slated to become a supportive housing complex with 298 residential units. (Andrew O’Reilly/Fox News)

Most housing development that has been constructed on Skid Row over the last decade has been supportive housing, and a nonprofit organization, the Weingart Center, recently proposed building a 19-story affordable housing tower in the neighborhood on what is currently a parking lot.

The apartment complex would include 298 residential units – all studio apartments – as well as office space for the Inner City Law Center and Chrysalis, a job training and placement services nonprofit. The Weingart Center also has plans to build an 18-story and a 12-story supportive housing building on Skid Row that would have 382 apartments for homeless individuals.