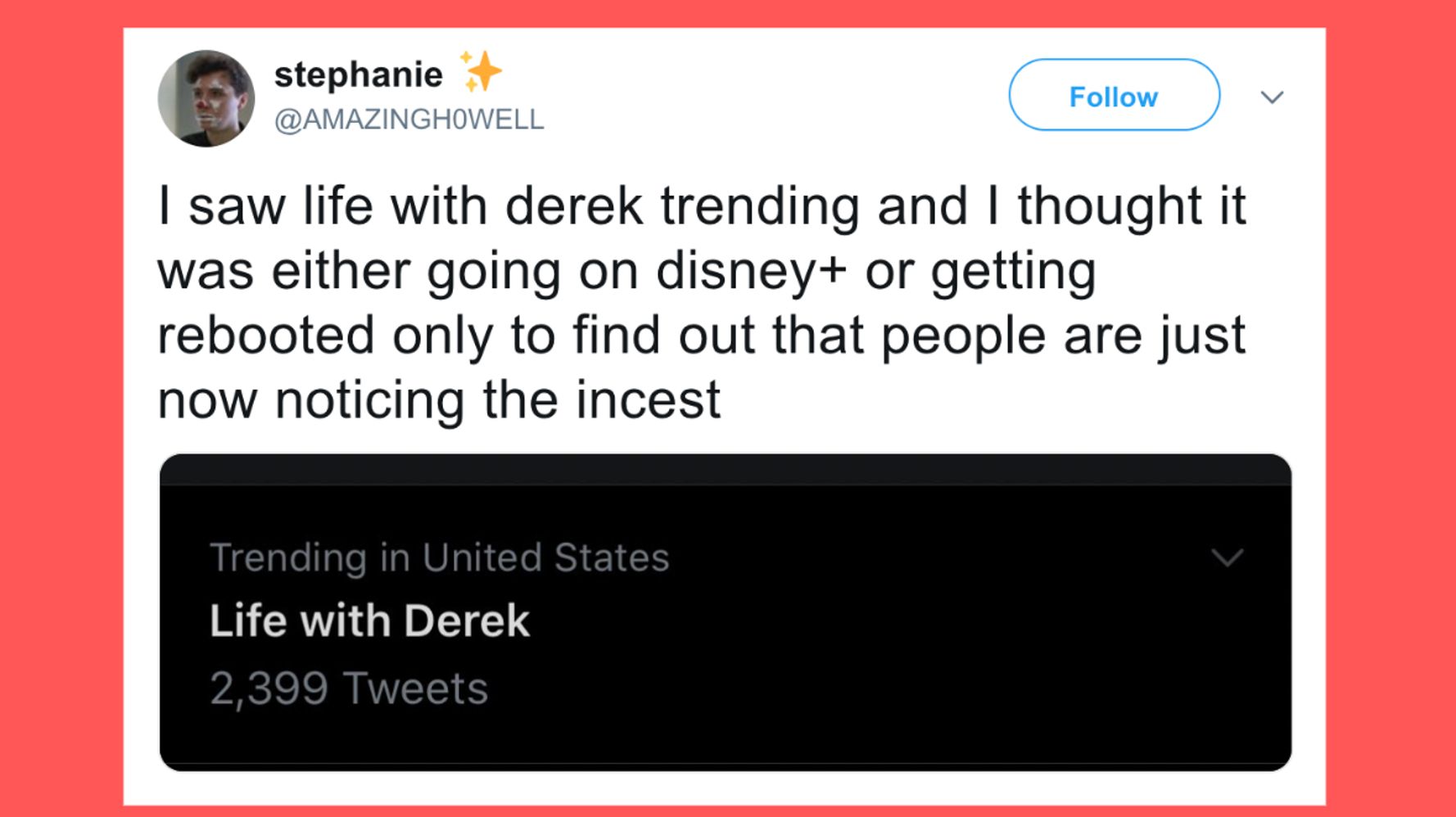 In case you were wondering why a Disney Channel show that’s been off the air for more than a decade is trending on social media, it’s because of ― incest.

Chatter for days has been bubbling up on Twitter about the show, “Life With Derek,” a Canadian sitcom that also aired on Disney Channel from 2005 to 2009.

I saw life with derek trending and I thought it was either going on disney+ or getting rebooted only to find out that people are just now noticing the incest pic.twitter.com/fIySnq7uvH

Derek was the teenage son of George who married Nora, the mother of teenage daughter Casey. When the two families merged, chaos ensued as Casey and Derek rivaled for control of their new household.

While the show mostly followed the various hijinks Derek and Casey would get into at school or with friends, there seemed to be a lot of flirtation between them. In fact, their interactions caused them to be widely shipped by fans, even though a sexual relationship between step-siblings might be considered by some to be, you know, incest.

The duo never got physical on the show, but fans in 2020 insist there was definitely tension.

Here’s some of the chatter:

Y’all barely finding about the suggested incest in life with Derek? I thought that’s what made the show sksksk pic.twitter.com/MwRf7BE2mn

nah Canada needs to answer for this one pic.twitter.com/MGvMDyczVP

Life With Derek. Then you also realize halfway through it’s a step sibling romance show which makes it get way weirder. https://t.co/ZEsgfprfiv

Me realizing that Life with Derek had incest and that I watched it unknowingly for all these years not putting 2+2 together till now pic.twitter.com/obfisOhpHI

Life With Derek is trending rn and 10+ years later I still can’t believe that Disney and Canada got away w this shit we all thought they were gonna smash at some point 🥵pic.twitter.com/8BHYTLHP70

Notably, the actors who played Derek and Casey, and the show’s creator Daphne Ballon, reportedly are totally cool with people thinking that the step-siblings should get it on.

Michael Seater, who played Derek, told MTV News in 2016 that he didn’t see anything wrong with his character being romantically linked to Casey, who was played by Ashley Leggat, and that they should’ve ended up together.

Leggat echoed those thoughts, calling a relationship between the two “a natural progression.”

As for creator Ballon, she apparently told a fan on Tumblr in 2011 that she understands the desire for Derek and Casey, aka “Dasey” to be together. She never expressed whether that was her intention all along.