Police arrested two men in the sexual assault of an Indian mother and her daughter whose heads they shaved after they resisted rape Wednesday in northeastern Bihar, India.

A large group of men and a local official — who has not been identified— broke into their home, intending to molest the woman’s 22-year-old daughter on Wednesday, according to police.

“I was alone with my mother around 6:30 in the evening when five men from the neighborhood forcefully entered the house and tried to molest me,” the daughter told NDTV. “When my mother and I protested, they started beating us with a stick and took us outside of the house.”

The women were then dragged into the streets and beaten by the men following the initial attack.

“We have been beaten very badly,”  the 50-year-old mother told the station. “I have injuries all over my body, and my daughter too has some injuries.”

The men, outraged by their failed attempt, then called a local barber who shaved the women’s heads as a punishment in front of the entire Bhagwanpur village after the mother-daughter duo tried to fight the men off.

The daughter claims the local official has harassed her for the past several months in addition to this mob-style attack.

Police say they are actively searching for the five other men involved in this attack. 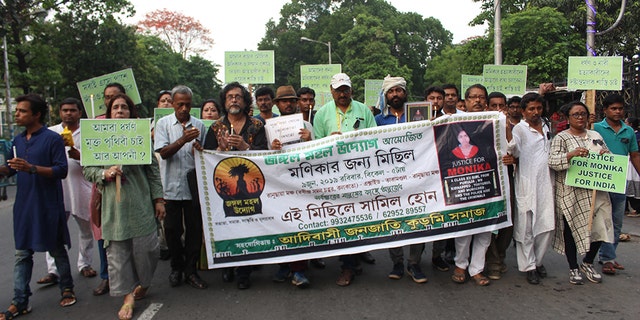 RANUCHAYA MANCHA, KOLKATA, KOLKATA, WEST BENGAL, INDIA – 2019/06/09: Local residents hold a banner and placards during the protest. Local residents protested against the crime committed on Monika Mahato, a girl from purulia, who was brutally gang-raped, murdered and her body buried. They demand for justice and proper investigation. (Photo by Subhajit Naskar/SOPA Images/LightRocket via Getty Images)

The woman and her daughter’s attack came just months after a teenage girl was attacked with acid in April after trying to escape gang rape. Several months before, an Indian woman was set on fire by two men who had molested her just days before her death in December.

India’s record-high volumes of sexual violence incidents, and after the gang rape of a 23-year-old on a New Delhi bus in 2012, prompted law reform and triggered global outrage.

Bihar State Women Commission Chairperson Dilmani Mishra said “further action” will be pursued in the most recent attack of the mother and her daughter.