Mexico’s Crackdown at Its Southern Border, Prompted by Trump, Scares Migrants From Crossing

NENTÓN, Guatemala — The Aguilar family had been preparing since February to migrate north. They borrowed $2,600, made a down payment to a smuggler and set off from their home in northern Guatemala last week.

But at Guatemala’s border with Mexico, their smuggler had some bad news: Crossing into Mexico was too risky. A June 7 deal between the Mexican authorities and the United States to reduce migration had brought extra security forces to the border.

Mexico’s mobilization of its security forces has been halting, and for most of the past two weeks it seemed to fall short of the dramatic show of force that the government had promised.

Still, the deployment has already disrupted the usual flow of people and commerce passing over this historically porous border, and sown fear among migrants and their smugglers alike.

“We don’t know anything, whether this is a definitive change, or just for some time,” said Juan Alberto Aguilar, 27, who was traveling with his wife and their 3-year-old daughter. The family sat dejectedly in the central square of Nentón, a village near the Guatemala-Mexico border, waiting for the van that would take them home.

The deployment plan is part of a deal between the administration of President Andrés Manuel López Obrador of Mexico and the American government to thwart President Trump’s threats of potentially crippling tariffs. 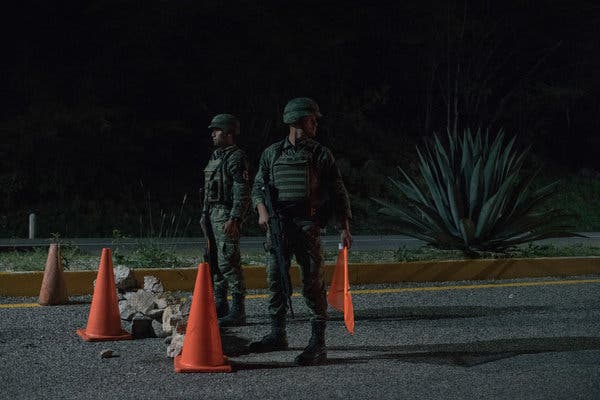 Soldiers working with Mexico’s National Guard standing at an immigration checkpoint in the state of Chiapas this month.CreditLuis Antonio Rojas for The New York Times

On Thursday, President Trump praised the Mexican president for his early efforts.

“The flow has very substantially slowed down,” Mr. Trump said. “It’s already had a big impact.”

In Ciudad Hidalgo, a bustling market town in Mexico near the southwestern end of the border, vendors say they have seen a significant falloff in business in the past two weeks. Most of their clients are Guatemalans who avoid paying duty on their purchases by returning illegally to Guatemala on rafts that ply the Suchiate River, which demarcates that section of the border.

“The people are scared to come because they fear that the government will come and take their merchandise,” said Mary, a vendor in Ciudad Hidalgo who asked that her last name be withheld for fear of government persecution. “We live from that commerce, eat from that commerce.”

Across the border, in Nentón, Guatemala, Silvia Avaja, 30, the owner of a general store, said she usually traveled to Mexico once every three months to buy products such as soap, deodorant and toothpaste. But the new security measures in Mexico had spooked her.

She, too, had heard that the Mexican authorities were seizing shoppers’ black market goods.

“I’m thinking of not going over there anymore,” she said.

But the effect of the deployment has been felt most significantly among undocumented migrants, who now see a more impenetrable Mexico.

Jonathan, 28, a Nicaraguan seminary student, said he fled his home after being subjected to government persecution and death threats following his participation in antigovernment protests last year. He first tried to settle in Costa Rica but, facing more death threats there, he flew to Guatemala and traveled by land to the border with Mexico.

He made it to Frontera Comalapa, 25 miles into Mexico, before the new migration-control measures brought his trip to a grinding halt.

“I never thought it would be like this,” he said, sitting in a soup kitchen one afternoon last week and considering the possibility that this was as far north as he was going to get.

Three Nicaraguan friends who had also made it to Frontera Comalapa had already returned to Central America to wait for a better moment to try to reach the United States.

But returning to Nicaragua, Jonathan said, was not an option for him. His goal was still to reach the United States, which promised a far better livelihood.

“I’m going to fight,” he continued, requesting partial anonymity because of his legal status in Mexico. “I’m going to do everything possible to get there.”

Guatemalan merchants resting by a border marker in Guatemala.CreditLuis Antonio Rojas for The New York Times

For now, however, he is weighing the possibility of applying for asylum in Mexico. Migrants’ advocates say many more Central Americans and others are opting to do this, as it is one of the few options left amid the crackdown.

Elsewhere along the border, entrepreneurs who make their living offering services to migrants have seen a drop in demand.

“Before there were even entire families crossing,” said Israel López Ordoñez, 52, a veteran raftsman on the Suchiate River in Ciudad Hidalgo. “Now, no.”

In the Guatemalan border town of La Mesilla, near Frontera Comalapa, Carmelo, 50, a money changer, said that several people he knows — including friends and family — have aborted plans to migrate north in the past two weeks.

“It’s not good,” he said of the new measures. “If a Guatemalan travels to the States, a lot of people here can live from that Guatemalan.”

Even migrant smugglers — responsible for ferrying many, if not most, migrants to the southwest border of the United States — are delaying or canceling trips north.

Soldiers working with Mexico’s National Guard waiting at an immigration checkpoint in southern Mexico this month.CreditLuis Antonio Rojas for The New York Times

Like the Aguilar family, Ottoniel López, 19, a Guatemalan migrant, found himself just shy of the Mexican border when his smuggler told him to turn around and go home.

He said he had set off on his trip, bound for the United States, knowing he might face a range of potential hazards, like fatigue, hunger and possible violence. But the Mexican government’s crackdown had not been part of his calculus.

“You always know that it’s going to be difficult,” he said here in Nentón, leaning out of the van that would take him part of the way to his home in southwestern Guatemala. “But now they said we could not pass because of all the blockades.”

The agreement with the Trump administration gave President López Obrador 45 days to prove that Mexico could reduce the number of migrants crossing into the United States. Mexican officials initially said they would send 6,000 members of a newly created National Guard force to southern Mexico to impede the northbound flow of undocumented migrants.

But the deployment has been uneven.

First, it kept getting pushed back. Then, Mexican officials backed off their initial promise to mobilize 6,000 National Guard members to the south, and instead said that the force would also include members of the armed forces.

Maximiliano Reyes Zúñiga, an assistant foreign secretary, said last week that only 40 percent of the total deployment would occur in the southern border states of Mexico.

Migrants climbing up the embankment stairs toward Ciudad Hidalgo, in Chiapas, Mexico, after arriving by raft from Guatemala.CreditLuis Antonio Rojas for The New York Times

But on Monday, Gen. Luis Cresencio Sandoval González, Mexico’s defense minister, said that the government had mobilized some 6,500 security forces in the southern states, including about 2,000 National Guard members. More than 14,000 additional security forces were deployed in Mexico’s north to help control migration, he said.

Officials in Chiapas also acknowledged that curbing illegal migration through the state, which shares a long border with Guatemala, would be extremely hard, if not impossible.

The mountainous region is crisscrossed by back roads and footpaths. And residents and others speculated that entrenched corruption among government officials who have abetted smugglers and migrants would not be eliminated anytime soon.

But the number of government roadblocks along some main highways in southern Mexico has increased, local residents say, and the migration authorities and security forces working with them seem to be more thorough in checking passing vehicles for undocumented migrants.

The authorities have also started the more ambitious work of combating the smuggling operations that are responsible for escorting many, if not most, migrants north.

Migrants’ advocates have warned that the crackdown could invite human rights violations, concerns that were underscored by therecent shooting death of a 19-year-old Salvadoran migrant who was riding in a truck bound for the United States border. Witnesses told investigators that men dressed in police uniforms and driving a police vehicle opened fire on the truck after it passed through a migration checkpoint in the state of Veracruz and sped away.

While National Guard members are still scarce in the southern border region, military forces, some of them outfitted with National Guard arm bands, have been newly mandated to conduct night patrols, and to question the occupants of passing vehicles and inspect their cargo.

Immigrants’ advocates anticipated that the increasing presence of security forces would continue to drive down the number of people trying to migrate north, but they expected that in time, the flows would rebound, perhaps through more remote and dangerous migratory pathways.

“It’s going to be like when Trump became president, and the rate of migration went down for several months, but then went back up again,” said David Tobasura, a Chiapas-based immigration consultant for the American Friends Service Committee. “This is not going to stop migration. Surely in a few weeks or months, it will go back up. It’ll be the same as it was before.”