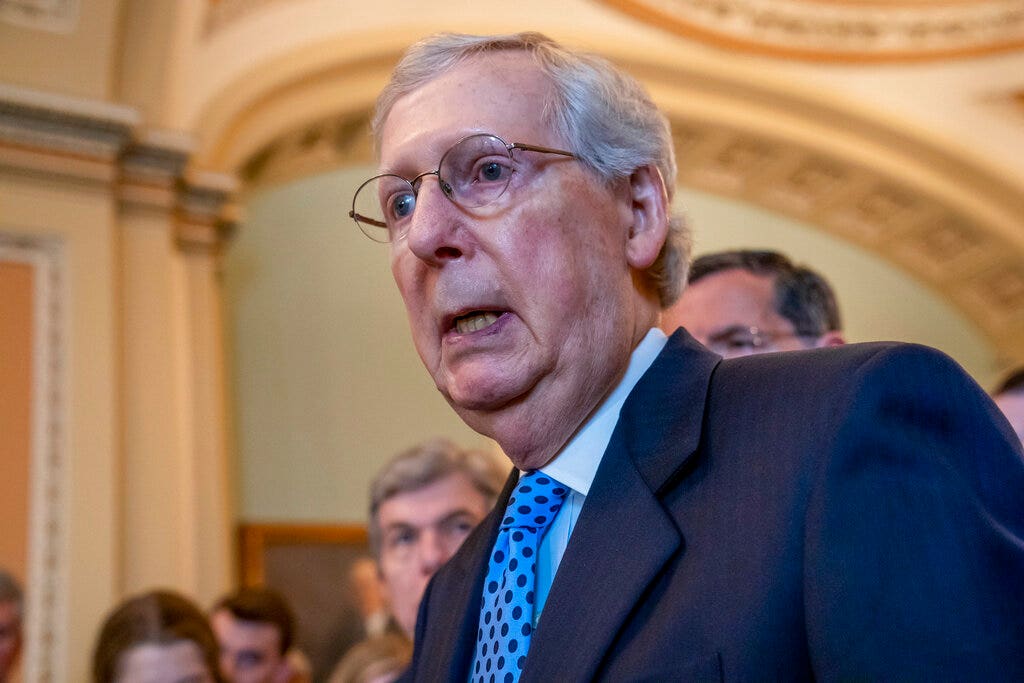 “McConnell has opposed paying reparations to descendants of slaves, though census records show his family, like many others, benefited from their labor,” reads the report. The “though” reveals the reporters’ hand: you can either descend from slave-owners or oppose reparations, but you can’t do both – at least according to NBC.

If our ancestry determines the validity of our political opinions, does this rule cut both ways? California senator and 2020 Democratic presidential candidateKamala Harris has endorsed some form of reparations for the descendants of slaves. But, like McConnell, Harris, too, descends from slaveowners.

NBC PUTTING ‘BOTH THUMBS ON THE SCALE’ FOR MCCONNELL’S 2020 CHALLENGER, CRITIC SAYS

“My roots go back, within my lifetime to my paternal grandmother Miss Chrishy (née Christiana Brown, descendant of Hamilton Brown who is on record as plantation and slave owner and founder of Brown’s Town),” writes the Harris’ father Donald in a post for the Jamaican Global. If Mitch McConnell’s slave-owning forebears invalidate his opinion of reparations, how can the same not be true for Kamala Harris?

My own forefathers arrived in America in 1620 on the Mayflower. Two of them fought with the Patriots at Bunker Hill.

Simon Knowles lived on to spend the winter of 1777-1778 at Valley Forge with George Washington. In October 1864, George Cobb Knowles gave his life at the Battle of Boydton Plank Road fighting with the Union Army to free the slaves.

The character of one’s ancestors has no bearing on the validity of one’s political opinions or the merit of one’s arguments.

Do the admirable feats of my forebears validate my own opposition to present-day Democrats’ radical, redistributive reparation schemes? If McConnell’s and Harris’ morally compromised ancestry leaves the question of reparations in a stalemate, does my opposition – thanks to my estimable progenitors – break the tie?

Barack Obama, the first black president, descends from two slave-owners. According to a report from Ancestry.com, he may also descend from one of the earliest African slaves brought to colonial America. Does his opinion count only insomuch as his enslaved ancestors outweigh the slave-owners?

Of course not. The character of one’s ancestors has no bearing on the validity of one’s political opinions or the merit of one’s arguments. Obama himself recognized the impossible complexity of the politics of historical grievance, which might explain why he has consistently opposed reparations.

“The bottom line is that it’s hard to find a model in which you can practically administer and sustain political support for [reparations] ,” Obama explained. “And what makes America complicated as well is the degree to which this is not just a black/white society.”

Recent immigrants might object to funding payouts for the descendants of men against whom their own ancestors committed no wrongs.

Adding to the complexity is the historical irony that the first officially recognized owner of an arbitrarily declared slave-for-life in America was a black man: Anthony Johnson of Virginia. Would Johnson’s descendants be entitled to reparations?

Native Americans of the Five Civilized Tribes owned black slaves at similar rates to neighboring whites and held them for longer since the 13th Amendment didn’t apply to the Indian nations. If the federal government embraces reparations for historical wrongs, would the descendants of those Natives find themselves on the paying or receiving end on that program?

In a self-governing republic such as ours, legislators craft laws through argumentation, persuasion, and deliberation. Reparations opponents such as Obama and McConnell have offered clear arguments for their position.

Reparations supporters have not because they cannot. That’s why they’d rather we talk about Mitch McConnell’s great-great-grandpa.