JACKSON, Mich. (AP) — A Michigan couple who family members say did everything together for 70 years up to their final breaths — died 20 minutes apart in the same hospice care.

Les and Freda Austin, both 90, from Jackson both entered hospice Dec. 6 and were in beds side by side when they died the following day, MLive.com reported.

The couple met in high school. Their first date was prom and they married in 1949. Their funeral service will be Tuesday in Mason, near Lansing, Michigan.

“They did everything together. They didn’t stop with death,” their daughter, Sandy Maes, told the newspaper. “I think they knew each other was passing and they are eternally together. And I think it was beautiful.”

The couple’s son, Michael Austin, added: “If they had to go, this way was about as romantic as you could get.” 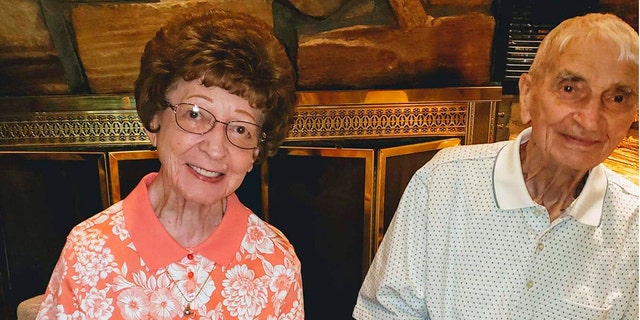 This June 2019 photo provided by Leah Smith shows Les and Freda Austin of Jackson, of Michigan, pose for a photo at a birthday party. The Michigan couple, who family members say did everything together for 70 years up to their final breaths, died 20 minutes apart in the same hospice care on Dec. 6, MLive.com reports. (Leah Smith via AP)

Les and Freda celebrated their 70th wedding anniversary in November.

He was a retired state police sergeant. She managed dry cleaning shop in Jackson, about 78 miles west of Detroit.

Freda enjoyed preparing meals for the family. She collected more than 1,000 cookbooks and was known for her chocolate chip and sour cream cookies, according to MLive.com.

“They went and saw pretty much every lighthouse in Michigan and some beyond Michigan,” Maes said. “My dad has to have the biggest collection of lighthouse sweatshirts and T-shirts anywhere.”

Les angered his wife when he signed up for military service during the Korean War without telling Freda.

“I know she was upset about that,” said Leah Smith, one of their granddaughters. “Seventy years together sure isn’t easy … but at the end of those 70 years together, they still cared so deeply for each other and loved each other so, so very much.”

“I’m so happy they went together,” Smith added. “I think it would have been torture for either of them to be here alone.”

In addition to Maes, Austin and Smith, the couple is survived by three other grandchildren and eight great-grandchildren.