Turbulence can rock even the most seasoned travelers, but airlines and experts do all they can to avoid it. Buzz60’s Sean Dowling has more. Buzz60

Miley Cyrus was traveling with her family, management team and band on a flight to the United Kingdom to perform at last month’s Glastonbury Festival, when their plane delayed landing ⁠— twice ⁠— in seemingly frenzied maneuvers.

Cyrus’ sister, Brandi Cyrus, reported the group’s experience on the flight on her Your Favorite Thing Podcast, which she co-hosts with “The Bachelorette” star, Wells Adams.

“I’m on the plane with my mom, my sister and my sister’s whole management team and her band and we’re descending and the wheels are out and it’s a little bumpy,” Brandi Cyrus said on the podcast.

“Out of nowhere, as we’re landing, we swoop back up and like bank to the left and turn. It feels crazy. Our plane tried to land twice and had to come back up because there were other planes in our way,” she continued.

Brandi didn’t elaborate on whether the experience was in a private plane or with a commercial airline. 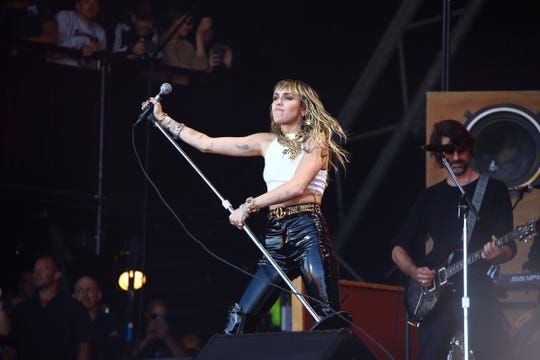 According to her account, Miley; their mom, Tish Cyrus; and Miley’s manager, Adam Leber, are nervous flyers, and the three started “losing their minds.”

More:Delta flight from Atlanta to Baltimore diverts to Raleigh due to possible engine issue

Brandi described Miley as being in her lap and “nobody was telling us what’s going on.”

She added: “A full five minutes go by, and we’re clearly going all the way back up and they finally come back and tell us, ‘No need to panic but somebody was in our lane in the sky and we were going to hit them.’ That’s terrifying to think about if you’re going 400 miles an hour and a plane is in our lane.”

“My mom starts crying and goes, ‘If we die, Noah (their brother) is alone’ and freaking out. I’m trying to hold it together for everybody.”

The flight attendants tried to reassure the cabin that this was happening because “it’s just so busy because of the festival,” according to Brandi.

Cyrus made the four-day festival, where she performed covers of Metallica, Led Zeppelin and Amy Winehouse songs, among other covers and her own music, on June 30.