Mitch McConnell Will Be The Boogeyman Of The 2020 Elections 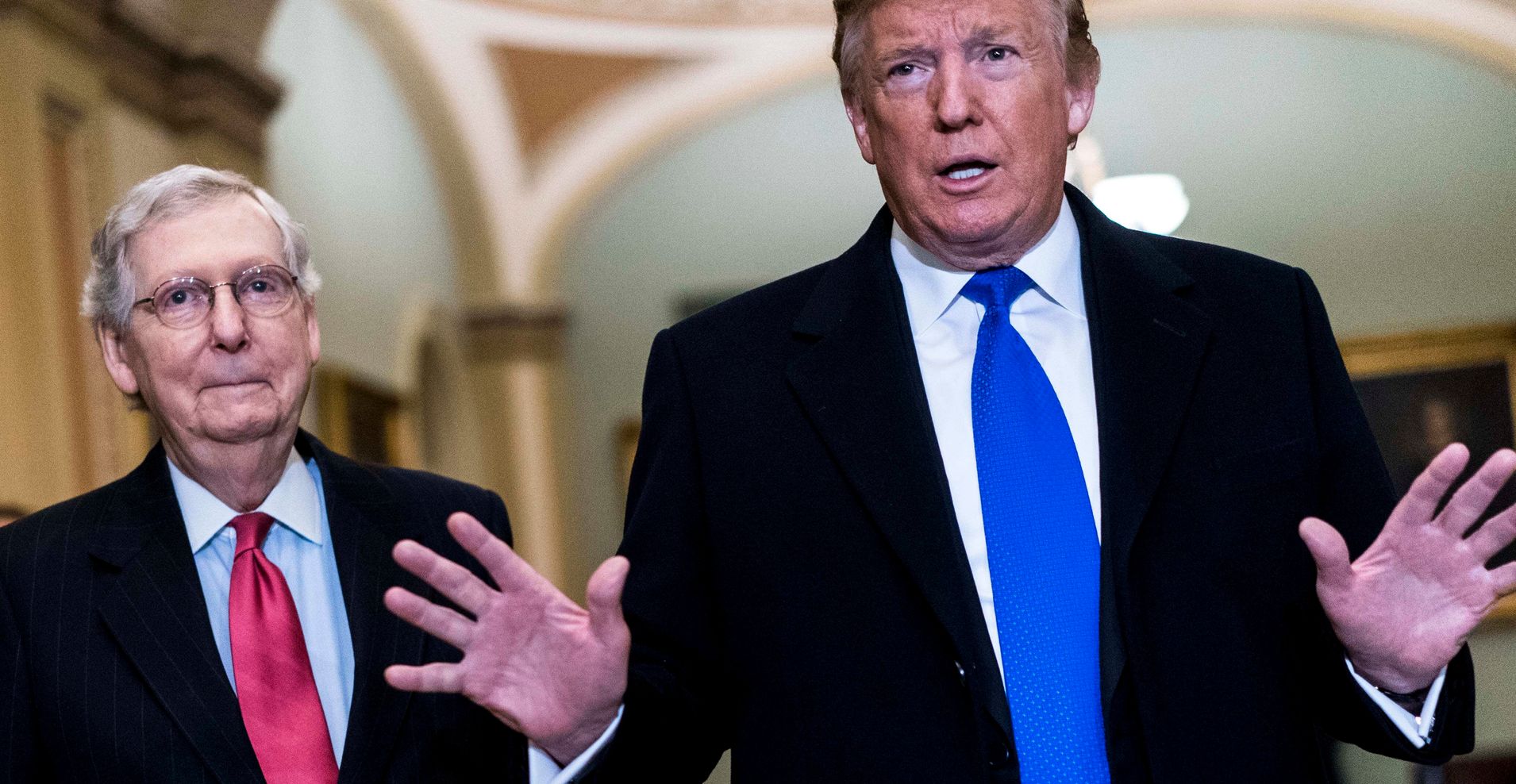 Democrats are preparing to make Senate Majority Leader Mitch McConnell a central villain of their push to win total control of Congress in 2020, an effort top advisers to the Kentucky Republican say will only further his efforts to become a conservative hero.

“Mitch McConnell is a transcendent figure in American politics; he is a unifier. He unites everyone in hatred and animosity toward him, including Republicans,” said Matt Canter, a Democratic pollster at Global Strategy Group who recently conducted a survey that could guide Democrats’ anti-McConnell efforts. “He’s a walking, talking definition of what people hate about Washington and the corrupt political system today.”

The focus on painting McConnell as corrupt and obstructionist, on display in early Democratic messaging, coincides with efforts by McConnell’s own advisers to portray him as a Grim Reaper slashing down progressive dreams as he runs for reelection in Kentucky. The dual pushes seem likely to ensure that McConnell’s record as the leader of the Senate is at the center of the 2020 elections, especially in the states that will ultimately determine who wins a majority of seats in the upper chamber. Republicans hold a 53-47 majority in the Senate, meaning Democrats need to win a net of at least three seats in 2020.

“He calls himself ‘Big John,’ but he shrinks out of the way while Mitch McConnell gets in the way of anything actually getting done in our government,” Hegar says in the video.

While McConnell has been a prominent Democratic boogeyman since at least the start of Obama’s administration, the Democratic base is increasingly aware of McConnell after his starring roles in the blockade of Supreme Court nominee Merrick Garland and the successful nomination of Justice Brett Kavanaugh. The DSCC’s fundraising messages now focus heavily on McConnell.

“When President Obama nominated Merrick Garland to the Supreme Court, Mitch McConnell didn’t even let him have a hearing,” reads one of the dozens of McConnell-centric Facebook ads the DSCC is running. “Now that Donald Trump is in power, Mitch McConnell is going NUCLEAR by changing the rules to pack our courts with extreme right-wing judges like Neil Gorsuch and Brett Kavanaugh on the bench instead.”

Equally noteworthy is who Ernst and Hegar don’t mention in their videos: Trump. The use of McConnell but not the president (Trump won both Iowa and Texas by fairly substantial margins in 2016) shows how Democrats believe McConnell has become a fairly nonpartisan villain, a symbol of corruption and, as one strategist put it, “the least sympathetic man in Washington.” Democrats hope they can use McConnell’s reputation to turn even swing voters who still like and trust the president against the GOP.

(The End Citizens United poll found swing voters were more likely to agree with Democratic arguments when they mentioned McConnell and the corrupting influence of money on politics.)

Republicans, including close McConnell allies, say the veteran senator will be able to turn the Democratic attacks to his advantage as he runs for reelection in Kentucky, potentially against Democratic Air Force veteran Amy McGrath.

“I think the left has turned him into a deity on the right. The more they highlight what he’s doing in the Senate, the more popular he becomes,” said Josh Holmes, a former McConnell chief of staff who remains one of the senator’s top political lieutenants. “Every time Donald Trump attacks Nancy Pelosi, it makes her stronger. When Democrats attack Mitch McConnell, it makes him stronger.”

McConnell’s team has been playing up his status as a bête noire of the left. The senator himself told voters in Kentucky to “think of me as the Grim Reaper,” and his reelection campaign has been using “Cocaine Mitch,” the infamous nickname bestowed upon him by disgraced coal baron Don Blankenship, as a way to sell merchandise. He also eagerly announced his willingness to fill a Supreme Court seat in 2020 after using the election-year status of Garland’s nomination as a fig leaf for blocking it.

“Oh, we’d fill it,” McConnell told a Kentucky questioner who asked about the plan for a possible Supreme Court vacancy. (CNN noted the senator “took a long sip of what appeared to be iced tea” before answering the question “with a smile.”)

McConnell’s allies believe he’s been at his weakest when Trump and rank-and-file Republicans have questioned his effectiveness, such as when Obamacare repeal failed in the Senate in the summer of 2017. But they argue his work to push through Kavanaugh’s nomination has restored his approval rating among Republicans, making his reelection in Kentucky safer (no GOP primary challenger has emerged yet) and strengthening his hand when dealing with donors and candidates across the country.

But Democrats and Republicans are now both emphasizing his skill and importance. (The portrait of McConnell as master manipulator and strategist ignores the aforementioned failure to repeal Obamacare, as well as his occasional electoral missteps.)

Beyond the question of McConnell’s strength, Holmes also said he thinks it’s impossible for Democrats in states like Iowa and Texas to shift the conversation from the all-encompassing Trump to the relatively low-key McConnell.

“When you can go after party leaders, you’re making a straight partisan play to solidify your base. But it doesn’t go further than that,” Holmes said. “With Donald Trump running for reelection, the idea that voters are going to ignore that and then pick and choose based on party leaders, that’s absurd to me.”

“This dynamic provides a clear opportunity for Democratic candidates to shape and win the debate, while also demonstrating the danger of ceding the issue to Republicans,” Global Strategy Group’s pollsters wrote in a memo. “Committing to enacting these policies and making these issues a focus of their campaigns will be critical for Democrats to win over persuadable voters in 2020.”