More than half of social media posts about George Floyd, police brutality, are from fake accounts: study

As both peaceful protests and violent rioting continue to unfold across much of the country following the May 25 death of George Floyd while in Minneapolis police custody, an extensive social media assessment has found that the unrest has been significantly amplified by the monthslong coronavirus lockdown and that more than half the online narrative is being driven by fraudulent accounts and bots.

“The extent of these activities being greater in magnitude than previous events of this nature due to unresolved grievances centered around perceived social injustices, wealth work, and income inequality that were accelerated by the negative impacts of the Coronavirus crisis (such as unemployment, isolation, and social distancing),” the report, formulated by ENODO Global, a Virginia-based security and risk analytics firm, stated. “Underlying social tensions buttressed by anxiety and fear dominate online discussions and illustrate how George Floyd’s death became a catalyst for unresolved grievances to manifest into violence.”

CREATING CHAOS: HOW ANTIFA AND OTHER EXTREMISTS DRIVE DISCORD ONLINE 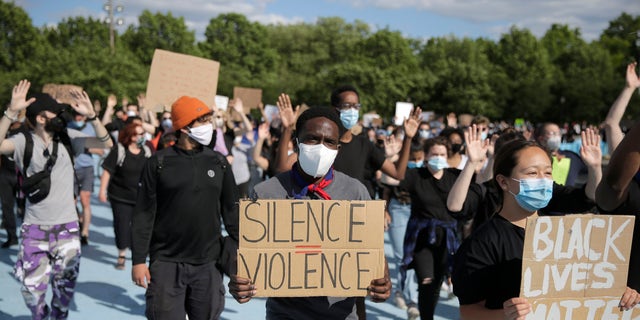 Protesters march a large sculpture of a globe in Flushing Meadows Corona Park in the Queens borough of New York, Sunday, May 31, 2020. Demonstrators took to the streets of New York City to protest the death of George Floyd, a black man who was killed in police custody in Minneapolis on May 25. (AP Photo/Seth Wenig)

The report also claimed that less than two percent of discussions are directly linked to George Floyd, key influencers are shaping public opinion – amplifying existing social tensions and fomenting unrest to support their agendas – and a staggering “52 percent of all discussions were posted by fake accounts, trolls, and bots.”

The analysis observed a 621 percent spike in such falsities over the course of 48 hours this week, and stressed that “fake accounts are being used to influence social media discussions.” Sixty-seven percent of messages were documented to support Black Lives Matter (BLM), while 33 percent were against the movement.

‘IT WAS A WAR ZONE’: SMALL-BUSINESS OWNERS WHO LOST EVERYTHING IN RIOTS SPEAK OUT

ENODO mapped the distribution of online discussions associated with the George Floyd protests in Washington, D.C. specifically, concluding that 47 percent of all discussions appeared on Instagram, 78 percent were posted by people who lived outside D.C., and 31 percent of the protest-related content appeared on Twitter. 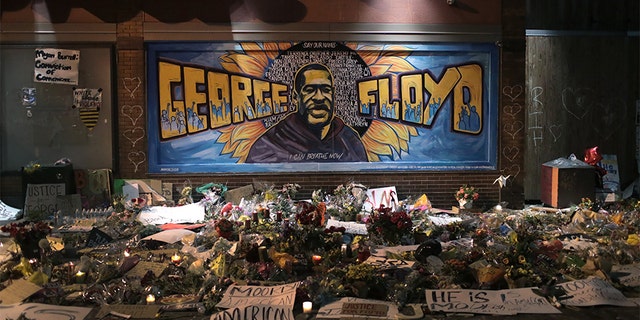 Candles burn at a memorial at the spot where George Floyd was killed, on June 1, 2020 in Minneapolis, Minn. (Photo by Scott Olson/Getty Images)

Data analysts also identified the top five “influencers” shaping online public opinions in the aftermath of Floyd’s death, which were classified based on their social media — that is, the number of online users engaged. The report concluded that CNN’s narrative on police reform had the most influence, followed by BLM’s focus on white supremacy.

The third most influential social media marker is documented to have come from Antifa and its push for police reform, followed by ABC News and civil rights activist DeRay McKesson’s critical focal point in discussing racism.