Some 20,000 people rallied in downtown Moscow on Sunday to demand the release of protesters who were jailed during a wave of opposition demonstrations this summer.

The earlier protests erupted in July after a dozen independent and opposition candidates were barred from running for the Moscow city legislature.

The rallies drew crowds of up to 60,000 at the time – the largest known show of discontent against President Vladimir Putin’s rule in nearly a decade. 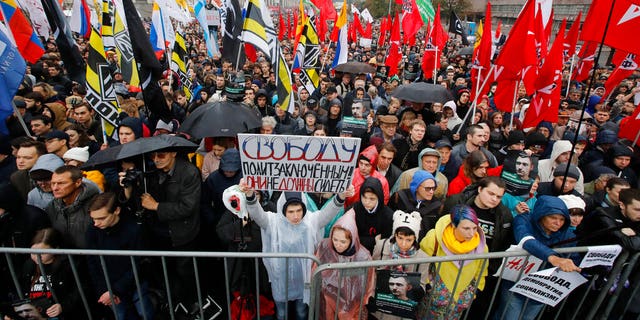 Russian police violently dispersed some of the election protests that weren’t sanctioned, detaining more than 2,400 people. Most were quickly released, but more than a dozen were jailed on charges of involvement in riots.

PUTIN AGAIN THREATENS TO DEVELOP PREVIOUSLY BANNED MISSILES IF US DOES

Amid the public outrage, officials dropped charges against some of the protesters, but several people have been sentenced to prison terms of up to four years. Others have remained in custody or under house arrest awaiting court verdicts.

Those at Saturday’s rally in downtown Moscow – which Russian authorities had sanctioned – chanted, “Free them all!”

“No one can get a fair hearing in Russian courts – injustice and lawlessness can happen to anyone now,” said Lyubov Sobol, one of the opposition candidates denied registration who helped spearhead the summer protests.

“Let’s be confident of our power. If we come out in force, we will win their release,” Alexei Navalny, the Kremlin’s most visible opponent, said at the rally.