Huge crowds of mourners poured into the streets of two Iranian cities on Sunday to pay their respects to Maj. Gen. Qassim Suleimani, the second most powerful figure in the country and leader of the elite Quds force, who was killed on Friday in an American drone strike near the Baghdad airport.

General Suleimani’s body was returned to Iran early Sunday — after tens of thousands of people joined processions for him in four Iraqi cities — and was received with military salutes at the airport in Ahvaz, a city in the southwest. A funeral procession then made its way through Ahvaz, the coffin draped in flowers and an Iranian flag, and depicting mourning symbols of the Shiite faith.

A mass of people snaked across the city’s main streets and a long bridge over the Karoun River. Stretching over 30 kilometers, or almost 20 miles, the crowds of men and women in black carried flags and photos of Mr. Suleimani and beat their chests in unison as Islamic prayers blasted from speakers around the city.

Iranian state television estimated that the mourners in Ahvaz and Mashhad, where the general’s body was flown later for another procession, numbered in the millions.

“The attack really wounded and insulted the national pride of Iranians,” said Amir, a 35-year-old businessman and resident of Ahvaz who asked that his last name not be used for security reasons. “I went to show my solidarity and to say no to war with Iran.”

Tensions across the Middle East have steadily ratcheted up since Friday’s killing of General Suleimani, who was credited with building Iran’s vast network of proxy militant groups across the region, from Yemen to Syria to Lebanon. On Sunday, Iran announced it was ending commitments it made to limit its nuclear fuel production in its 2015 deal with world powers. Senior Iranian military officials warned of a military retaliation for the killing.

The outpouring of grief reflects General Suleimani’s cultlike status in the country, which transcends political factions and grievances against the government. The majority of Iranians, even critics of the government, viewed him as the man who had protected Iran’s security against foreign threats like the Islamic State and conflict with Israel and the United States. 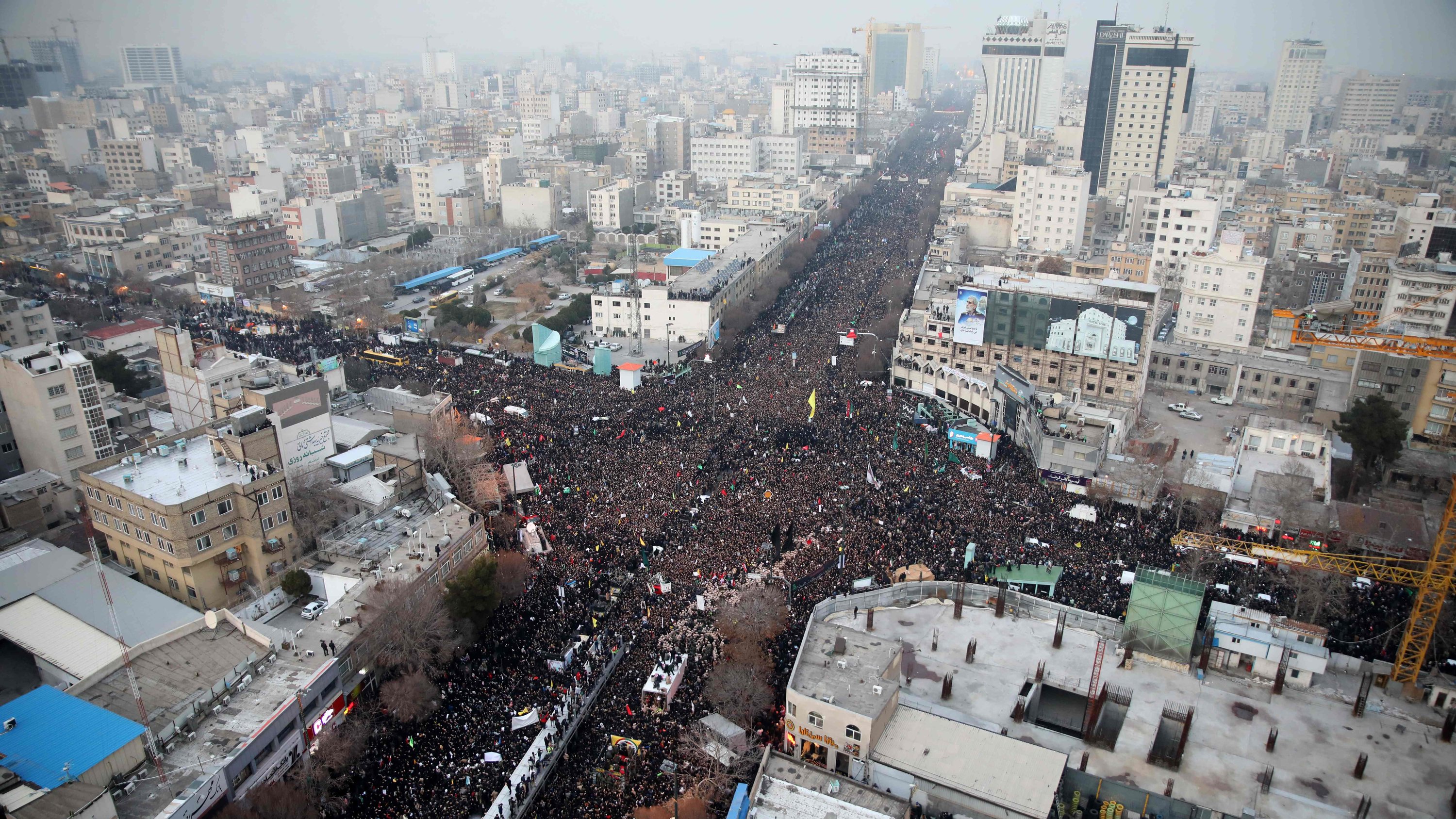 The body of Maj. Gen. Qassim Suleimani was brought back to Iran. Mourners flooded the streets, weeping and holding up posters of the general, as his coffin moved through the crowds.CreditCredit…Mohammad Taghi/Tasnim News, via Agence France-Presse — Getty Images

General Suleimani, who also oversaw the building up of a network of Shiite militias in Iraq, was the most powerful figure in Iran after the supreme leader, Ayatollah Ali Khamenei.

Among the others killed in the attack was Abu Mahdi al-Muhandis, the deputy head of the Iraqi Popular Mobilization Forces, which includes at least half a dozen pro-Iranian militias. His body was also flown into Iran on Sunday.

The choice of Ahvaz as the first stop of the funeral procession in Iran was significant because the city has a large ethnic Arab population which has not always supported the government. Many citizens there had joined the recent protests against the regime. But they united in their support for General Suleimani, a figure they viewed as larger than life.

After the procession through Ahvaz, the general’s body was flown to Mashhad, a holy city in northeastern Iran that contains Shiites’ third most important shrine. Millions of people also flocked to the streets there, and the city was shut to car traffic. Men and women openly wept and called for revenge on the United States during interviews in the state news media.

The host of state television broadcasting the funeral processions said that the turnout underscored the public fury at the United States, and that any negotiations or a deal with the United States was over.

The general’s coffin is to travel to Tehran on Monday for a state funeral that will begin at Tehran University and make its way to the landmark Freedom Square. A public holiday has been declared, and the municipality is bracing for an estimated crowd of 15 million, according to a person familiar with the planning.

Tehran’s emergency shelters are open and free to visitors from other cities, and free meals will be available. Various government agencies and ministries have offered to provide water and food to participants.

A highway in Tehran has already been named after the general.

“Tomorrow is a national day,” said Meysam Sharifi, a Tehran resident who plans to attend the procession with his family. “It’s the responsibility of every Iranian to come and commemorate a national hero.”

The general will be buried Tuesday in his hometown, Kerman, according to the wishes expressed in his will.