This may be a big year for NASA with a number of upcoming projects, but 2020 is off to a rocky start for the space agency, as it announced it lost contact with the ASTERIA satellite, a small spacecraft that’s designed to look for planets outside the Solar System.

NASA JPL said it lost contact with the Arcsecond Space Telescope Enabling Research in Astrophysics (ASTERIA) satellite on Dec. 5. The craft, smaller than a suitcase and known as a CubeSat, was observing “a handful of nearby stars” and was able to demonstrate “that it could achieve precision measurements of the stars’ brightness,” the agency said in a release dated Jan. 3.

“With that data, scientists look for dips in a star’s light that would indicate an orbiting planet passing between the satellite and the star. (This planet-hunting technique is called the transit method.) Mission data is still being analyzed to confirm whether ASTERIA spotted any distant worlds.” 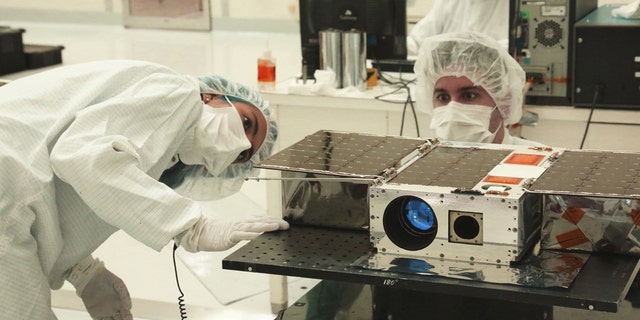 Left to right: Electrical Test Engineer Esha Murty and Integration and Test Lead Cody Colley prepare the ASTERIA spacecraft for mass-properties measurements in April 2017 prior to spacecraft delivery ahead of launch. ASTERIA was deployed from the International Space Station in November 2017. Credit: NASA/JPL-Caltech

Since it completed its initial mission in February 2018, ASTERIA has been used to test a variety of functions to make CubeSats more autonomous, including the use of artificial intelligence, NASA said. “ASTERIA also made opportunistic observations of the Earth, a comet, other spacecraft in geo-synchronous orbit and stars that might host transiting exoplanets,” the space agency added.

“The ASTERIA project achieved outstanding results during its three -month prime mission and its nearly two-year-long extended mission,” said JPL’s Lorraine Fesq, current ASTERIA program manager, in a statement. “Although we are disappointed that we lost contact with the spacecraft, we are thrilled with all that we have accomplished with this impressive CubeSat.”

ASTERIA could also aid with missions such as the Transiting Exoplanet Satellite Survey (TESS), the replacement for the Kepler satellite. TESS has made a number of exoplanet discoveries, including its most recent find of an alien world that “should not exist” in its current location.

Even if NASA is unable to regain contact with ASTERIA, it said scientists will still be able to conduct experiments on the autonomy programs utilizing the mission testbed, a replica of the craft’s internal hardware.

ASTERIA has been sending data to NASA since 2017. Since completing its initial mission in February 2018, it has performed three mission extensions. NASA said attempts to contact the craft “are expected to continue into March 2020.”