The Oklahoma City Thunder have traded Russell Westbrook to the Houston Rockets for Chris Paul in an exchange of star point guards that reunites Westbrook with former teammate James Harden in Houston, according to multiple reports.

In addition to Paul, the Thunder also are getting first-round picks in 2024 and 2026, plus the right to swap first-rounders in two other seasons. The trade was first reported by ESPN.

Neither team had officially announced the trade as of Thursday night, but Rockets owner Tilman Fertitta told Fox 26 Houston that the deal had been agreed to.

“We’re so excited to have Russell Westbrook,” Fertitta said. “I would watch him play for Oklahoma City and he’s so athletic. At the same time this franchise just had the two years with the most wins it’s ever had in consecutive years and we wouldn’t have accomplished that without Chris Paul. Chris Paul is unbelievable and he’s gonna be sadly missed.

“I said at the end of the year we’re never gonna stand pat,” Fertitta went on. “We’re always gonna try to get better. I think this makes us a better team. I hate to lose Chris Paul, but we felt like we did what we had to do to become a better team.

“I think it’ll be very interesting and fun,” the Rockets owner added. “James [Harden]  and Russell wanted to play together. It oughta be fun this year.”

Paul is a nine-time All-Star, Westbrook an eight-time selection. Paul has 9,181 career assists, the most among active players. Westbrook has 138 triple-doubles, tied with Magic Johnson for second-most in NBA history behind only Oscar Robertson’s 181. 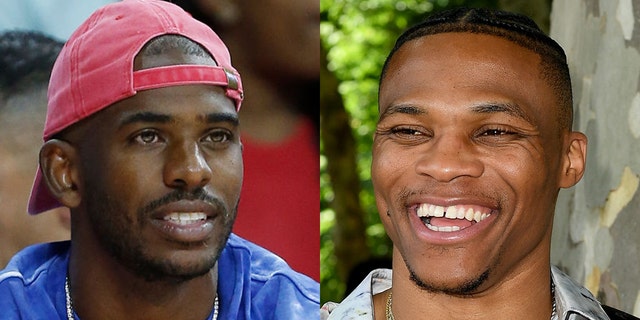 The Oklahoma City Thunder have traded Russell Westbrook, right, to the Houston Rockets for Chris Paul in an exchange of star point guards, according to reports.

Westbrook and Harden were Thunder teammates for three seasons, the last of those in 2011-12 when that duo and Kevin Durant took Oklahoma City to the NBA Finals. They lost in five games to LeBron James, Dwyane Wade and the Miami Heat, and Harden was traded that summer to Houston — where he’s been a perennial All-Star ever since.

But when the Thunder agreed last week to trade Paul George to the Los Angeles Clippers, it became clear quickly that Westbrook would be on the move as well. And this trade, when completed, will mean that Thunder general manager Sam Presti has added seven first-round picks to the team’s stockpile in the last week or so.

Oklahoma City got five first-round future selections as part of the George trade. The Thunder are getting two more in this trade.

Paul and Harden were teammates for two seasons in Houston. The Rockets had a 3-2 lead over Golden State in the 2018 Western Conference finals when Paul injured a hamstring, and the Warriors rallied to win that series in seven games on the way to the NBA title. This past season, Houston was ousted by the Warriors in a six-game second-round series.