A retired New York City police officer says he got punched in the face at a Tennessee bar, all because he was wearing a birthday hat and shirt with Trump-like slogans.

Daniel Sprague of Staten Island said he and his wife were celebrating his 50th birthday in Nashville and he was wearing a hat that said “Make Fifty Great Again” and a shirt that said “Making America Great since 1970.”

But suddenly, he told Nashville’s WSMV-TV, a woman approached him and took a swing, striking him in the face before fleeing.

“At one point,” Sprague said, “a female came up from behind me, spun me around, and punched me in the face and then grabbed my hat off my head and was just yelling, ‘How dare you.’ 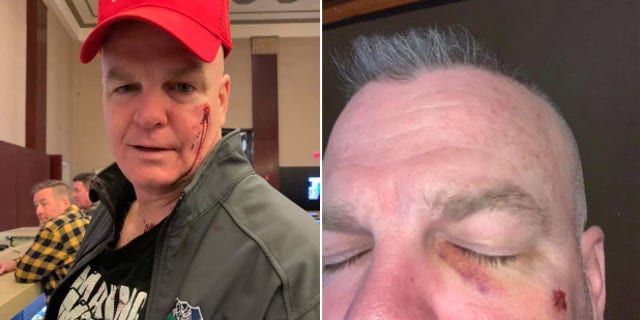 “I would assume that she had a ring or she maybe even had a set of keys or something to get it,” he told the station about the cut on his face, “because it is pretty deep and it goes to the bone.

“People have different views, but we’re not supposed to take it out on each other,” Sprague said.

Joe Borelli, a New York City councilman from Staten Island, posted a photo of a bloodied Sprague on on Twitter account.

Prior to the incident, Sprague said other bar patrons were offering nothing but positive feedback about his attire.

“People were just coming up to me and, you know, just loving the little word play on the hat and taking pictures and wishing me happy birthday,” Sprague told WSMV.

Sprague said he filed a report with Nashville police and was awaiting word about their investigation.