Copyright 2015 Libero Themes.
All Rights Reserved.
Westlake Legal Group > News  > Russia Is a Mess. Why Is Putin Such a Formidable Enemy?
0 Comments
Share

Russia Is a Mess. Why Is Putin Such a Formidable Enemy? 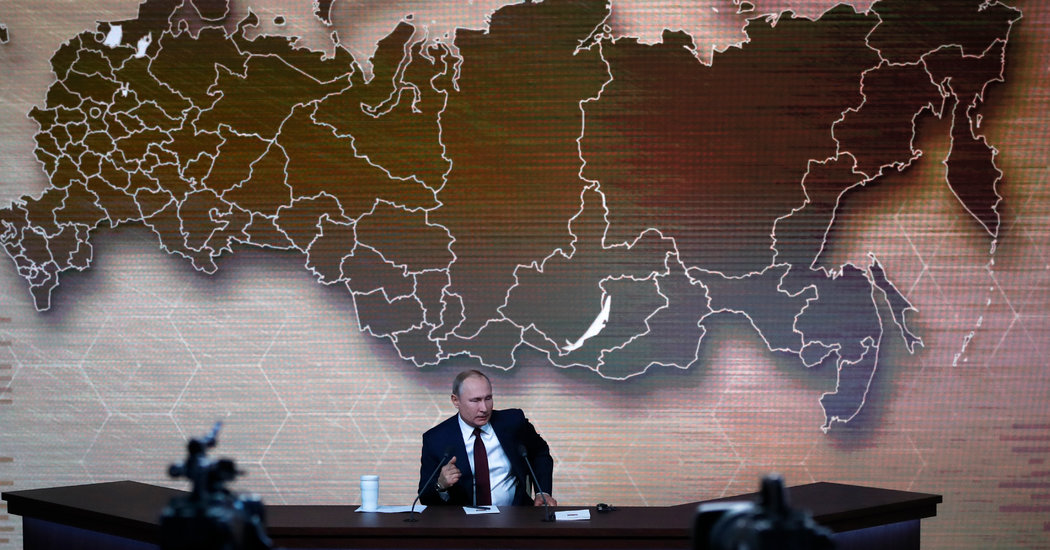 MOSCOW — Its economy, already smaller than Italy’s, may be sputtering but, two decades after a virtually unknown former K.G.B. spy took power in the Kremlin on Dec. 31, 1999, Russia and its president, Vladimir V. Putin, have just had what could be their best year yet.

The United States, an implacable foe during the Cold War but now presided over by a president determined to “get along with Russia,” is convulsed and distracted by impeachment; Britain, the other main pillar of a trans-Atlantic alliance that Mr. Putin has worked for years to undermine, is also turning inward and just voted for a government that vows to exit the European Union by the end of January.

The Middle East, where American and British influence once reigned supreme, has increasingly tilted toward Moscow as it turned the tide of war in Syria, provided Turkey, a member of NATO, with advanced missile systems, and signed contracts worth billions of dollars with Saudi Arabia, America’s closest ally in the Arab world. Russia has also drawn close to Egypt, another longtime American ally, become a key player in Libya’s civil war, and moved toward what looks more and more like an alliance with China.

It has been barely five years since President Barack Obama’s dismissive 2014 judgment of Russia as a “regional power” capable only of threatening its neighbors “not out of strength but out of weakness.” Its successes raise a mystifying question: How has a country like Russia, huge in size — it has 11 time zones — but puny when measured by economic and other important metrics, become such a potent force?

“When the Soviet Union collapsed, everyone was asking the same question,” recalled Nina Khrushcheva, granddaughter of the Soviet leader Nikita Khrushchev and a Russia expert at the New School in New York: “How is it that such a rotten system punched so far above its weight?”

The West, Ms. Khrushcheva said, has repeatedly misread a country whose ambitions are as immense as its territory — it stretches from the Pacific Ocean to the Baltic Sea — and that is often untethered from what looks like reality. Mr. Putin, she said, “is at once a technocrat and a religious zealot, an exhibitionist and a master of secrets. You expect one thing, linearly, and suddenly it’s entirety something else, smoke and mirrors.”

Under Mr. Putin, Vladislav Surkov, a longtime Kremlin adviser, wrote in Nezavisimaya Gazeta, a Moscow newspaper, earlier this year, Russia “is playing with the West’s minds.”

As a reporter based in Moscow two decades ago when Russia’s first democratically elected president, Boris N. Yeltsin, handed power to Mr. Putin, I traveled to St. Petersburg, the new president’s hometown, to try and figure out what chance — if any — Mr. Putin had of ruling, never mind reversing, the bleak scene he had been handed.

Russia was a mess, its economy still blighted by a post-Soviet collapse worse than the Great Depression in the United States, its military so feeble that it had lost a war in tiny Chechnya, its population so disillusioned with Mr. Yeltsin’s promises of new capitalist dawn that it had elected a parliament filled with communists, cranks and crypto-fascists.

A conversation with Mr. Putin’s former high-school biology teacher, however, quickly made clear that, as a popular Russian saying goes, “hope dies last.” She remembered Mr. Putin as not only a diligent student but also an exceptional basketball player because “he was very tall.”

That the diminutive new president had grown in her memory to become a giant gave me my first glimpse of what, over the 20 years since, has been a defining feature of Mr. Putin’s rule: his ability to present himself and his country as standing far taller than objective facts would seem to justify.

It is not all just legerdemain.

“Maybe he’s holding small cards, but he seems unafraid to play them,” said Michael McFaul, a former United States ambassador to Moscow and now a scholar at Stanford. “That’s what makes Putin so scary.”

Mr. Putin acknowledged as much in an interview with the film director Oliver Stone. “The question is not about having much power,” he said. “It’s about using the power you have in the right way.”

Mr. Putin has harnessed Russian patriotism, which he described in his recent year-end news conference as “the only possible ideology in modern, democratic society,” to achieve some real results, notably curbing the disorder of the Yeltsin era, along with the freedoms.

He crushed a rebellion in Chechnya, which he visited just hours after taking office in a show of can-do bravado, modernized the armed forces and reined in — driving into exile, jailing or simply terrifying — the oligarchs who, under Mr. Yeltsin, had done so much to discredit capitalism and democracy. He has nurtured a new clique of obedient oligarchs loyal to the Kremlin.

All the same, said Gleb Pavlovsky, a political scientist who worked for more than a decade as a Kremlin adviser, Russia under Mr. Putin still reminds him of a sci-fi movie exoskeleton: “Inside is sitting a small, weak and perhaps frightened person, but from the outside it looks terrifying.”

‘The Ideology of the Future’

Russia’s economy is dwarfed by that of America’s, which is more than 10 times bigger in dollar terms; it is too small to make even a list of the top 10, and it grew by around just 1 percent this year. Nor does Russia pack much cultural punch beyond its borders, despite excelling in classical music, ballet and many other arts. South Korea, thanks to K-pop and its movies, has more reach.

Yet Russia has become a lodestar for autocrats and aspiring autocrats around the world, a pioneer of the media and other tools — known in Russia as “political technologies” — that these leaders now deploy, with or without Moscow’s help, to disrupt a world order once dominated by the United States. These include the propagation of fake or at least highly misleading news; the masking of simple facts with complicated conspiracy theories; and denunciations of political rivals as traitors or, in a term President Trump borrowed from Stalin, “enemies of the people.”

Whatever its problems, Mr. Surkov, the Kremlin adviser, said, Russia has created “the ideology of the future” by dispensing with the “illusion of choice” offered by the West and rooting itself in the will of a single leader capable of swiftly making the choices without constraint.

China, too, has advocated autocracy as the way to get results fast, but even Xi Jinping, the head of the Chinese Communist Party, can’t match the lightening speed with which Mr. Putin ordered and executed the seizure of Crimea. The decision to grab the Black Sea peninsula from Ukraine was made at a single all-night Kremlin meeting in February 2014 and then carried out just four days later with the dispatch of a few score Russian special forces officers to seize a handful of government buildings in Simferopol, the Crimean capital.

The temptations of authoritarianism à la Russe have found fertile ground in countries that long saw themselves as bastions of Western values like Hungary and Poland, and that had long histories of hostility toward Moscow. They have seduced voters elsewhere in Europe, too, and also in parts of the United States. Mr. Pavlovsky, the former Kremlin adviser, said he was stunned during a recent trip to Western Europe to have people tell him “how lucky we are in Russia to have such a brilliant and strong president.”

“There is almost a consensus that Putin is a great man, a resurrection of de Gaulle,” he said. “Putin thinks this himself. It is not just an illusion, because it works.”

Not all Russians are convinced, particularly the young in Moscow and St. Petersburg, who staged protests over the summer to declare that Mr. Putin’s time is up.

But the security forces quickly put an end to that, using often brutal force, and Mr. Putin’s approval rating nationwide, which had dipped slightly, is now back up to around 70 percent, according to an opinion poll published in November by the Levada Center.

This is down from the period of nationalist euphoria that followed the annexation of Crimea but is still remarkably high in a country with stagnant growth and, for many, shrinking prospects.

Heartened by the shifting winds in Russia’s direction, and his own, in an interview with The Financial Times, he pronounced dead the West’s governing creed since the end of World War II. The ideology of liberal democracy, he said, “has outlived its purpose.”

Russian mind games have been particularly successful in the United States, which Mr. Putin and his officials regularly accuse of paranoid Russophobia but whose fixation on Russia has only multiplied the force of its influence. Moscow’s efforts to sow division through Facebook and other social media platforms were low-budget and often primitive, but they have had a disproportionate effect on the American political process.

The result is a state of fretful and anything-goes uncertainty, a condition summed up by Peter Pomerantsev, a Soviet-born British author, in the title of his 2014 book about Mr. Putin’s Russia: “Nothing is True and Everything is Possible.”

In Russia, Ms. Khrushcheva said, “it’s not what is on the surface, it’s doublespeak, triple-think. That’s why we are so good at art.”

When Mr. Putin first took charge after Mr. Yeltsin’s surprise resignation on the eve of the new millennium, he declared his commitment to a very different direction for Russia than the one he has since taken.

Bid farewell by Mr. Yeltsin on the steps of the Kremlin with a melancholy request that he “take care of Russia,” Mr. Putin appeared on television a few hours later to deliver his first New Year Eve’s address to the nation, vowing to “protect freedom of speech, freedom of conscience, freedom of the mass media, ownership rights, these fundamental elements of a civilized society.”

He delivered much the same message a year and a half later in a historic speech, the first by a Russian leader, in the Reichstag in Berlin, sketching a vision of Russia as inextricably bound to Europe and its values.

By 2002, however, he was already growing weary of Russia being viewed as a supplicant junior partner. “Russia was never as strong as it wants to be, and never as weak as it is thought to be,” he warned.

Bitterly disillusioned with the West on security issues, in 2007 Mr. Putin delivered a speech in Munich bristling with resentment and anger at American unilateralism and disregard for Russian opposition to the expansion of NATO. “They bring us to the abyss of one conflict after another,” he said, creating such insecurity that “nobody feels safe.”

But the real turning point, said Mr. Pavlovsky, who was then working in the Kremlin, came a year later with the meltdown of global financial systems.

“For Putin this was a decisive threshold,” he said. “Before this he orientated himself toward America. Yes, he disliked in the extreme what the Americans were doing around the world, but all the same he saw America as the strongest economy that runs the world economic system. Suddenly it turned out: no, they are not running anything.”

This, Mr. Pavlovsky said, “was the moment of truth,” when “all the old norms vanished.”

Since then, he said, Russia has set about creating its own norms.

“Reality is not a children’s matinee or the handing out of mandarin oranges,” he said. “In other words, things simply don’t look like you thought they do, like you wanted them to, like you expected them to.”