Sarah Sanders: Russia investigation is over, ‘time for Democrats to move on’

“This thing is over,” she said. “It’s time for Democrats to move on. They can’t continue to drag this thing out and continue to put the American people through this. Look, there was no collusion, there was no obstruction. Now they need to come together and work with the president to actually fix real problems. 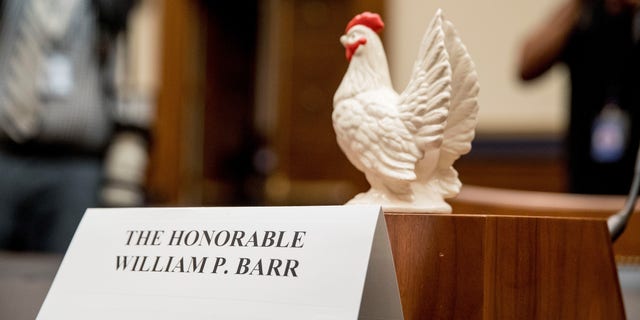 Rep. Steve Cohen, D-Tenn., placed a prop chicken on the witness desk for Attorney General William Barr after he does not appear before a House Judiciary Committee hearing on Capitol Hill in Washington. (AP)

“They’ve shown they aren’t capable of working with us on immigration, but maybe they could help on infrastructure or lowering prescription drugs.”

Barr skipped a House hearing Thursday on Mueller’s Trump-Russia report, escalating an already acrimonious battle between Democrats and the president’s Justice Department. House Speaker Nancy Pelosi suggested Barr had already lied to Congress in other testimony and called that a “crime.”

Barr’s decision to avoid the hearing, made after a disagreement with the House Judiciary Committee over questioning, came the day after the department also missed the committee’s deadline to provide it with a full, unredacted version of Mueller’s report and its underlying evidence. In all, it’s likely to prompt a vote on holding Barr in contempt and possibly the issuance of subpoenas, bringing House Democrats and the Trump administration closer to a prolonged battle in court.

Democrats convened a short hearing that included an empty chair with a place card set for Barr. Committee Chairman Jerrold Nadler of New York said that if the attorney general doesn’t provide the committee “with the information it demands and the respect that it deserves, Mr. Barr’s moment of accountability will come soon enough.”

Shortly afterward, Pelosi escalated the tensions further. In a possible reference to the attorney general’s testimony earlier this month, Pelosi said Barr “was not telling the truth to the Congress of the United States — that’s a crime.”

Sanders said on “America’s Newsroom” that “Democrats embarrassed themselves yesterday.”

“The attorney general sat for five hours yesterday, and answered every question put in front of him,” Sanders said. “He was willing to sit down again with the House…the Democrats have changed the rules in the middle of the game. They took a vote yesterday, a special vote in order to allow staff to question the attorney general. He is a cabinet member for the president of the United States. And this is a straightforward oversight hearing in which members of Congress should be able to ask those questions.”